In recent years, Washington Wizards point guard John Wall has solidified himself as one of the best floor generals in the NBA. Last season, Wall averaged 17.6 points, 10 assists, 4.6 rebounds and 1.7 steals while shooting 44.5 percent from the field. He ranked second in the NBA in assists per game (10) and total assists (792), trailing only Los Angeles Clippers point guard Chris Paul. Wall and Paul each recorded 40 double-doubles last year, which led all guards. 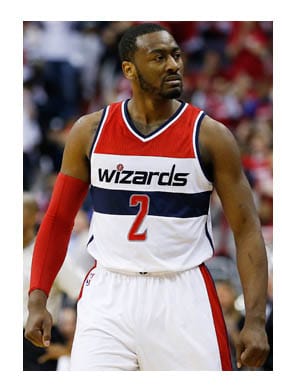 Wall put up these impressive numbers despite being hobbled by various injuries (including sprains in both ankles, a shoulder sprain, a sore Achilles and debilitating migraines) throughout the year. However, the two-time All-Star toughed it out, playing the sixth-most minutes of any player in the NBA (2,837) while leading the Wizards to a 46-36 record and the fifth seed in the Eastern Conference.

In the playoffs, Wall’s averages increased to 17.4 points, 11.9 assists, 4.7 rebounds, 1.4 steals and 1.4 blocks. He had a number of dominant games, such as his 26-point, 17-assist performance in a victory over the Toronto Raptors in the first round.

Washington advanced to the Eastern Conference Semifinals and had a 2-1 lead over the Atlanta Hawks, but then Wall sustained five non-displaced fractures in his left hand and wrist. Somehow, he managed to miss only three games and return during that series, posting 35 points, 20 assists, 10 rebounds, six steals and three blocks in Washington’s final two games against Atlanta. But the Wizards weren’t able to overcome Wall’s injury and lost the series in six games.

Wall spent much of the summer wondering what would have happened had he stayed healthy. Now, he enters his sixth NBA season determined to show significant individual improvement and lead his team further than ever before.

Basketball Insiders recently caught up with Wall to discuss a variety of topics including his offseason training, thoughts on the Wizards’ additions, lofty individual goals for this year, planned recruitment of Kevin Durant next summer, where he ranks himself among the NBA’s elite and much more.

Basketball Insiders: You played through a lot of injuries last year. How nice is it to be 100 percent healthy entering this season and how much will that help your game?

John Wall: “It helps a lot. I mean, throughout a season, you’re never going to stay 100 percent for the whole year. You’re going to have nicks and bruises because it’s a long year and you’re playing against tough players every night and competing at a high level. So I know that about 25 games in, I may have some injuries, some ankle sprains or whatever. But it is fun to finally be healthy again, and [it’s nice] to see everyone healthy. It makes the games more interesting; you get to see the best players in the world compete against each other.”

Basketball Insiders: This summer, you guys lost Paul Pierce, but you added some quality veterans in Jared Dudley, Gary Neal and Alan Anderson among others. Personally, I liked the moves since those guys can be key contributors and they will improve your depth. What did you think of the team’s offseason?

John Wall: “It was great. It was tough losing Paul [Pierce], Rasual [Butler] and those guys because they helped us a lot, but I like the additions. Alan [Anderson] can help us. Gary [Neal] has been around a team that’s been to the Finals. A guy like Jared Dudley knows what it takes to win and he’s someone who knows his role. These are all veteran guys who know their role and who can come in and just help us win games. Those kind of guys are key.”

Basketball Insiders: What aspects of your game did you work on this summer?

Basketball Insiders: I think people forget how young you are since you’ve been so successful in your first five NBA seasons. You just recently turned 25 years old. How much more room for improvement do you feel you have?

John Wall: “I have a lot of room left to grow. I’m nowhere near reaching my full potential. I think I’m still just scratching the surface of how great I can be. I want to keep getting better. I think the only way you can be a superstar in this league and [become] a Hall of Fame player is by improving every season and getting better at something. That’s something I’m willing to put in the work to do, and I think I have a great opportunity to do that this year.”

Basketball Insiders: How good can your Wizards be this year? As a team, you guys have improved each season and a lot of people are picking you guys to go deep in the postseason. How good can this team be?

John Wall: “I think we can be really great, just like last year. I think we can be as good or better than last year’s team. But for that to happen, I have to step up. I have to make big shots and make big plays, especially with Paul [Pierce] going away. But I think we’re going to be great. We’ve added some new things to our team, added some new things to our offense that are going to help us this year. Our main focus is still on being a defensive-minded team and rebounding the ball because that’s what we pride ourselves on. That’s our team’s identity.”

Basketball Insiders: What has to happen for this season to be considered a success? What, in your mind, would be a good year for you guys?

John Wall: “A good year is 50-plus wins, getting home-court advantage in the playoffs and definitely making the Eastern Conference Finals to give ourselves a shot at the Finals. Anything goes from there – it’s just a matter of whoever can win four games first.”

Basketball Insiders: How do you guys take that next step to become a championship-caliber team? What do you guys need to do in order to get that level?

John Wall: “We just need to treat every game like we did in the playoffs. We need to have a playoff mindset, where every game matters and we’re locked in. Throughout the season, we can’t get away from that. You have to take every game seriously, as well as every shoot-around and every practice. We need to go into every game thinking that we’re getting ready for the playoffs. That’s going to be the biggest key.”

Basketball Insiders: What are some of your individual goals for this year?

John Wall: “I want to be in the MVP conversation and give myself a shot at being the MVP. That means I need to play well, help my teammates play well, get those guys shots and lead my team to wins. I definitely want to be an All-Star starter again. I want to be All-NBA First Team. I want to be on the All-Defensive First Team; I was All-Defensive Second Team last year. I think I was snubbed from the All-NBA Third Team last year, but I just use that as motivation for this year to try to get better. Another individual goal is definitely leading the league in assists this year. There are a lot of things I want to do, but those are some of the main ones.”

Basketball Insiders: I’m glad you brought up the MVP award because I was going to ask you about that. The Wizards rely on you so much on both ends of the floor and you’re so important to the team, yet you weren’t in the MVP conversation last year. There were 12 players who received at least one MVP vote last year, but you weren’t one of them. Does that motivate you?

John Wall: “Yeah, totally. I’m a point guard, so I don’t score a lot. I know I could score 24 points if I wanted on any given night, but I’m a guy who can average 18 points and 10 assists, and I’m perfectly fine with that as long as my team is winning. I’m just a guy who does whatever my team needs: rebounding, getting blocks, trying to shut down the best player on the other team. I’m willing to do all of that, and I think that’s what an MVP-type player does because they’re the most valuable player to their team.”

Basketball Insiders: When you say you’re a top three point guard, who are the other guys you have right there alongside you?

John Wall: “Russell Westbrook is obviously a tough guy to cover because he does a lot. Steph Curry is another one. And when Kyrie Irving is healthy, he’s one of the best players. Those are the toughest guys to go against, I think.”

Basketball Insiders: You got your teammates together for two weeks of bonding prior to training camp. How beneficial was that experience for the team?

John Wall: “I always want to do that and take on that role. I think it’s important to get everyone together. We have some new guys who haven’t been around the team and a lot of us haven’t seen each other over the summer, so this gave us a great two weeks to workout, hang around, go out to the movies or a club or whatever we want to do. It’s all about enjoying being around each other and building some team chemistry and camaraderie.”

Basketball Insiders: You recently said that you’re going to make a recruiting pitch to Kevin Durant when he hits free agency next summer and that obviously made headlines. I know you have a ton of friends around the NBA. Are you and Durant close? Do you guys already have a relationship?

John Wall: “Oh yeah, [our relationship] is great. That’s like one of my big brothers in the league. I mean, I respect his game and respect everything he’s doing in business and how he runs his team and all of that. We’re really close. And like I said, when the opportunity is right to go ahead and throw a [free agency] pitch at him, I’m going to get the opportunity to do it. I would love to play with him because I know how talented he is. But right now, I’m focused on the Washington Wizards and he’s focused on the Oklahoma City Thunder. I’m not going to text him and ask him questions about that, you know what I mean? I’m focused on what I’m doing with my team, and I know that talk like that can throw people off track. He’s already hearing a lot of [free agency] talk and having people ask him that question. So when the time is right and I feel like I can throw my pitch, I will. But right now, I’m letting him do what he’s doing and I’m doing what I’m doing because I’m trying to help my team win a championship.”

Basketball Insiders: I wanted to ask about recruiting. I know some guys like to do it, but others don’t. Some players, like Chandler Parsons, are known for it and embrace that role as a recruiter. I know you said you’re going to recruit Kevin Durant, but how do you feel about recruiting in general? Is that something you want to do more of going forward for the Wizards?

John Wall: “Well, if I see my team is trying to go after somebody and I’m cool with them or I feel like they would be a great asset to our team, I don’t mind doing that. It’s just like when you’re playing in college. If you want to go win a championship, you need to go get the best players. You want to add great players so that your team has a shot to win. I don’t mind recruiting.”