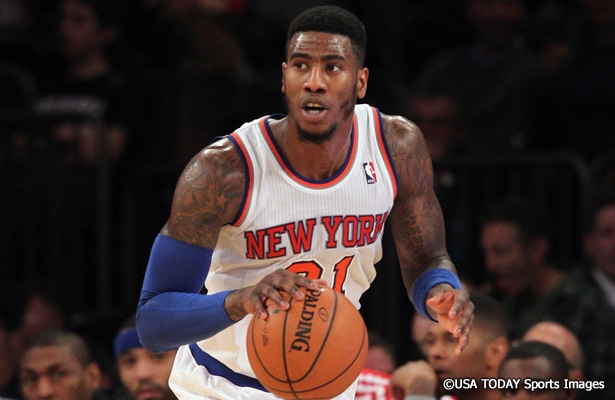 The February 20 NBA trade deadline is under a week away and while most of us will be enjoying All-Star weekend festivities, league executives will be continually evaluating their options in the marketplace. This year’s deadline will feature a solid mix of productive players whose careers could favorably benefit from a change of scenery.

Let’s take a look at some guys who are sure to hear their names mentioned in the rumor mill leading up to the deadline, but could also come out the better for it if dealt:

Beno Udrih, Guard, New York Knicks: The 31-year-old point guard has logged just 38 minutes over the past month and hasn’t played in a game since January 24. It is becoming increasingly clear Udrih is on the outs in New York and the feeling is mutual. Udrih openly discussed his frustrations with the Knicks’ locker room culture earlier this season and the relationship between the guard and franchise is broken.

According to Marc Berman of the New York Post, the San Antonio Spurs and Washington Wizards may have some interest in acquiring the veteran at the deadline.

Jimmer Fredette, Guard, Sacramento Kings: Fredette’s name has been on the trade rumor circuit for the last two seasons. The jury is still out on whether Fredette can be a team’s full-time floor general, but the one thing no can take away from the third-year pro is his elite shooting range.

There are numerous teams around the league who are actively seeking to bolster their perimeter depth and Fredette is sure to receive at least a bit of exploratory interest.

To date, Fredette hasn’t lived up to being a top 10 pick, but a change of scenery and a different role may work wonders for the former Brigham Young University standout.

Andre Miller, Guard, Denver Nuggets: Miller hasn’t played since December 30 and, as of now, there are no plans for the veteran to suit up for the franchise in the immediate future. Miller has been away from the team since a run-in with rookie head coach Brian Shaw that ultimately led to a brief suspension.

Despite the Nuggets’ depth issues at guard over the past few weeks, Miller wasn’t welcomed back into the fold, which speaks volumes on his future in Denver.

Various reports have linked the Sacramento Kings and Washington Wizards to Miller, with both teams reaching out to the Nuggets to facilitate trade talks. However, a deal isn’t imminent at this time.

Miller ranks ninth on the all-time career assists list with 8,056. The veteran was averaging 5.9 points and 3.3 assists in 30 contests this season – by far the lowest production of his career.

Iman Shumpert, Guard, New York Knicks: The Knicks entered the season seemingly intent on trading Shumpert in order to secure another significant veteran contributor. But Shumpert emerged from the early season trade talk still in New York, albeit with a bruised ego.

Shumpert is a strong defender and has shown glimpses of being a decent offensive player. The guard is also one of the few attractive trade assets on the Knicks’ roster since he’s viewed favorably around the league.

With the Knicks actively working the lines leading up to the deadline, you can expect Shumpert’s name to emerge again. However, a new situation might not be a bad thing for the former Georgia Tech product to endure.

Dion Waiters, Guard, Cleveland Cavaliers: Reports have recently emerged implying Cleveland executives have reassured Waiters that he won’t be dealt at the trade deadline. There are times when front office personnel retracts those types of promises, but for the most part they’re honored at face value (unless something monumental comes along).

But even if Waiters is safe in Cleveland for the time being, is it the best situation for him long-term?

Waiters reportedly had friction with All-Star guard Kyrie Irving earlier in the year, which he quickly denied. Then Waiters was relegated to a sixth man role in the rotation, which he struggled with.

If the Cavaliers decided to field offers for Waiters, there would be interest in the second-year guard and it wouldn’t necessarily be a bad thing for the Syracuse product.

The Boston Celtics are strongly positioned to take on the role of buyer or seller at the upcoming trade deadline. The team has an expiring veteran contract in forward Kris Humphries, plenty of draft picks over the next few seasons, a former All-Star who has garnered plenty of interest in Rajon Rondo and productive guys like Brandon Bass and Jeff Green who could aid a team’s playoff quest.

But Celtics president of operations Danny Ainge has kept his cards close to the vest. Rondo, who is high on the New York Knicks’ list of targets, has basically been told he won’t be dealt. Bass and Green’s names continue to be mentioned in rumors and they could secure a decent return if dealt.

The tension of the deadline this time of year has Rondo avoiding sports reports at all costs.

“I don’t watch TV,” Rondo told Mark Murphy of the Boston Herald. “It’s been like that my last eight years as a Celtic. There’s only two guys who have been in rumors (apparently referring to Bass and Green). “It’s just part of the game. We have a pretty young team, but we don’t talk about the trades.”

The Celtics (19-35) are not out of the Eastern Conference’s playoff hunt, but the team is likely headed to this year’s draft lottery. Here is a list of the team’s pick swaps – current and future: