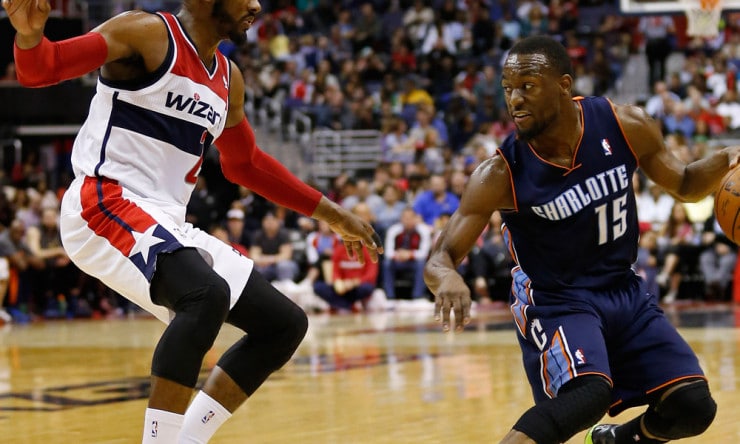 The deadline to sign members of the 2011 draft class to early contract extensions is October 31. The top overall pick of the draft, All-Star guard Kyrie Irving, has already received a five-year $90 million extension from the Cleveland Cavaliers this past summer.

One of the members of the class whose market value has likely increased is Charlotte Hornets point guard Kemba Walker who was selected with the ninth overall pick in 2011. Walker’s leverage will undoubtedly be helped by Charlotte’s recent ascent in the standings and the fact guard Eric Bledsoe was recently able to secure a five-year, $70 million deal from Phoenix.

But will the Charlotte Hornets decide to do with the emerging Walker?

The Hornets can choose to extend Walker now to stop the slew of questions from the media or prevent any type of chemistry issues unfolding throughout the season. The Hornets could also elect to let opposing teams set the guard’s value next summer in restricted free agency (a qualifying offer would need to extended, of course).

To be clear, there’s risk associated with letting top talent hit the open market. The very nature of restricted free agency means opposing teams understand and typically pay an extra premium while attempting to lure talent away from their existing franchise. One of the best recent examples of this is when the Portland Trail Blazers immediately (and unexpectedly) offered a maximum contract to center Roy Hibbert a few years ago. The Indiana Pacers ultimately matched the offer sheet but it came at a price point most believed was higher than if they handled business before the early deadline passed.

Hornets general manager Rich Cho addressed the Walker contract situation and acknowledged negotiations have begun but it’s too early in the process to deem anything imminent.

“We’ve had some initial talks,” Cho said according to Rick Bonnell of the Charlotte Observer. “I don’t want to get into the discussions because I don’t think that would be fair to Kemba or his agent. It’s just started.”

Cho did take the time to marvel at Walker’s growth and maturity while he takes on a more prominent leadership role with the Hornets’ locker room.

“Maybe it doesn’t come naturally to him (telling others what to do), but he does it by his actions – just little things like gathering guys to do a voluntary workout,” Cho said. “If you ask him, he’s definitely more comfortable now in his fourth year than in his second year. He’s comfortable with who he is in the league – the whole maturation process.”

The Hornets also have a decision to make with center Bismack Biyombo, the No. 7 overall pick of the 2011 draft, as well. Biyombo, however, seems more likely to take a trip through restricted free agency as opposed to Charlotte bidding against themselves early on.

End of the line for Jermaine O’Neal?

You hear this term consistently in this space. Father Time is undefeated with all wins by knockout. Sure there have been plenty of guys who have been able to stave off Father Time and add a few more productive years in their career (i.e. Tim Duncan). But for the most part, the end is never as graceful as those prime years.

Former All-Star Jermaine O’Neal may be at the end of his run, with the recent announcement by Golden State Warriors general manager Bob Myers that the team won’t be inviting the veteran to training camp next week.

“He’s not going to come to (training) camp,” Myers told Diamond Leung of the Contra Costa Times.  “We’re going to go with our guys, our three centers we have — (Andrew) Bogut, (Festus) Ezeli, (Ognjen) Kuzmic.

O’neal averaged 7.9 points and 5.5 rebounds with the Warriors last season in 44 contests. According to the report, O’Neal is contemplating retirement.

“I think he’s still processing what he wants to do, still in the process of figuring it out,” Myers said. “But for our purposes, he’s not going to be with us…He probably won’t be with us next year. The reason is nothing detrimental in regards to him, but we just have three guys that we have at the position, so he’d (have been) the fourth center, so that’s more why. Nothing negative. He was fantastic for us last year.”

If O’Neal does hang the laces up for god, he’d retire with six All-Star selections and the 2002 Most Improved Player awards on the mantle.