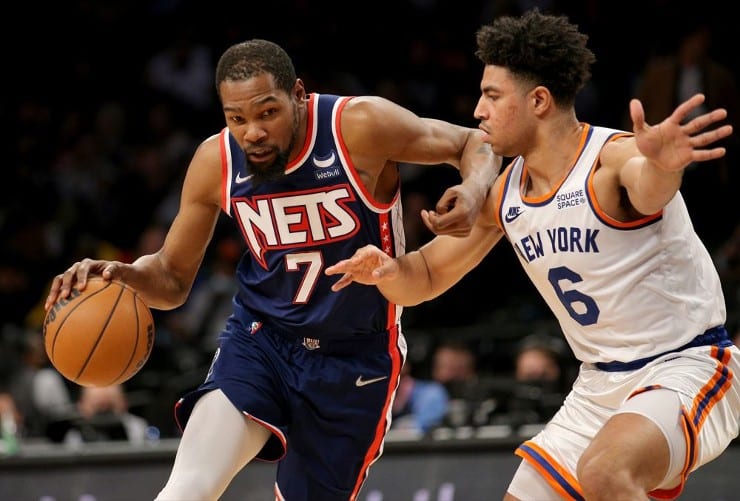 Our Tuesday night NBA slate is smaller today with just four games on for fans to enjoy throughout the evening. The 8-9 Brooklyn Nets will be on the road tonight to face the 8-8 Philadelphia 76ers. At 8:00pm, the 9-6 Sacramento Kings will be in Memphis tonight to face the 10-7 Grizzlies. Wrapping the night up are the 3-15 Detroit Pistons who will be facing the 10-6 Denver Nuggets.

Ben Simmons returns to Philly, the Kings seek 7 straight wins and more tonight on TNT and on the NBA App! 🔥https://t.co/HMzmcX9KHT pic.twitter.com/iqSLB6qJNp

The Brooklyn Nets are 4-2 in their last six games and will be on the road vs the 76ers tonight. Tonight, they’ll face a a Philadelphia team that is without their three biggest stars tonight. James Harden, Joel Embiid, and Tyrese Maxey are all out for the Sixers tonight.

Our pick for this game is Brooklyn Nets -7.5 @ -115 with BetOnline. The Nets are 7-9-1 against the spread as a team this season and have covered the spread in five of their last seven games. Brooklyn recently got back Nets SG Kyrie Irving after he was out eight games for a team issued suspension.

The Detroit Pistons have lost seven games in a row and are last in the Central Division. Denver is 10-6 and 2-3 in their last five games. Aaron Gordon and Jamal Murray are both questionable for the for tonight’s contest. Detroit has some injuries piling up on their side as well. Isiah Stewart, Cade Cunningham, and Saddiq Bey are all out for the Pistons tonight.

Our pick for this game is Denver Nuggets -5.5 @ -110 with BetOnline. The Nuggets are 7-9 against the spread this season and are still in good shape to beat up on a Detroit team that has been struggling all season. Nikola Jokic (covid protocols) is doubtful for tonight’s game.

Tonight’s contest between the Lakers and the Suns is an inner-division matchup where the two teams are having opposite outcomes. The Lakers are 5-10 this season and the Suns are 10-6. LA has won their last three games in a row behind some dominant Anthony Davis showings. Phoenix is 3-3 in their last six.

Our pick for this game is Phoenix Suns -10 @ -105 with BetOnline. The Suns are 10-6 against the spread this season and the Lakers are 5-10 against the spread, ironically the same as their records. LA will be without Lebron James for their game tonight.

Back Suns -10 @ -105 with BetOnline
Join our Telegram channel for our exclusive free betting tips, picks and offers.