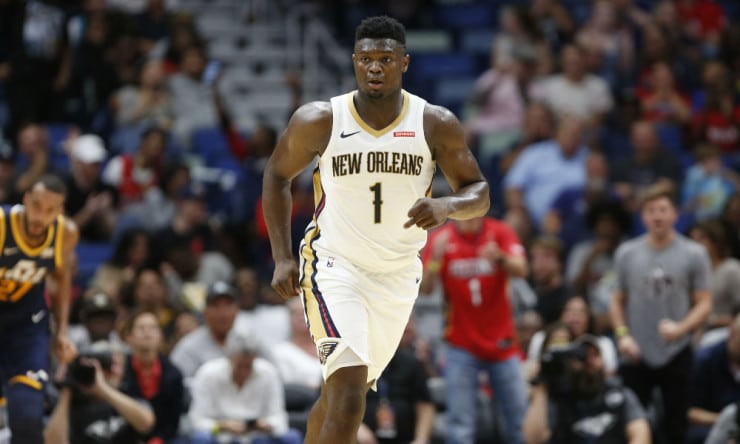 The start of the new NBA season is just around the corner but let’s look at some news from the last week of the NBA Preseason as NBA odds boards at different sportsbooks see adjustments to the win totals for the teams.

Per ESPN’s Adrian Wojnarowski, Williamson, the No. 1 pick in the NBA Draft, out of Duke, is expected to miss a “period of weeks” so we will have to wait for his NBA debut. The news obviously worries Pelicans fans because Williamson is expected to help turn the franchise around but he should not play unless he is 100 percent ready.

Williamson showed promise in his preseason debut, scoring 16 points with seven rebounds and three assists while entertaining the crowd with amazing dunks as the Pelicans beat the Hawks 133-109 on October 7 but we also witnessed potential issues in his game. Williamson took 13 shots (missed two 3-pointers) and eight of those were around the restricted area in the lane (he would make just three of them).

Jrue Holiday led the way against the Hawks with 21 points in 18 minutes, Brandon Ingram finished with 19 points and six rebounds, Lonzo Ball had nine points, seven assists and five rebounds and promising rookie Nickeil Alexander-Walker added 12 points, which tells us that this is a team with a deep roster that to me will be just fine in those few weeks without Williamson. New Orleans also signed free agents JJ Redick and Derrick Favors and they can make some noise in the West once Williamson comes back.

Star guard Bradley Beal agreed to a two-year contract extension with the Washington Wizards worth $72 million. The deal has a player option for the second year, which means that Beal can push his free agency from 2021 to 2022, seemingly keeping him off the trade market while giving the Wizards at least one more year to show him that they’re serious about their intentions to be a competitive team in the near future.

Beal averaged a career-high 25.6 points, 5.5 assists and 5.9 rebounds in 36.9 minutes over 82 games last season and he averages 19.8 points, 3.9 rebounds and 3.7 assists in 34.4 minutes over 488 career games (454 starts) in seven seasons with the Wizards. Beal clearly wants to play for a winner, so now is up to the Wizards to prove him that they can build a competitive roster, unless they want to risk losing him.

The Rockets ended their preseason slate with a 144-133 road win against the Heat last Friday but Russell Westbrook had to leave the game in the fourth quarter after re-aggravating finger injuries on his right hand.

Westbrook dislocated two fingers on the right hand in the game against the Spurs but he still played against the Heat. Backup guard Austin Rivers also left the game early. He played only seven minutes before experiencing neck soreness and sitting out.

“Both of them told me they were OK, so we’ll take that,” head coach Mike D’Antoni told ESPN. Westbrook had 16 points, four rebounds and four assists on 6 of 13 shooting in 26 minutes.

After Paul George demanded a trade to the Clippers, the Thunder worked together with Westbrook to send him to a team of his choice and James Harden wanted to play with him, so he convinced the Rockets to go after the 2017 NBA MVP.

Harden and Westbrook were teammates with the Thunder for three years and their Big Three with Kevin Durant made it to the 2012 NBA Finals where they would eventually lose to the Heat in five games. Adding Westbrook makes the Rockets serious contenders in the Western Conference as long as both players show a willingness to sacrifice.