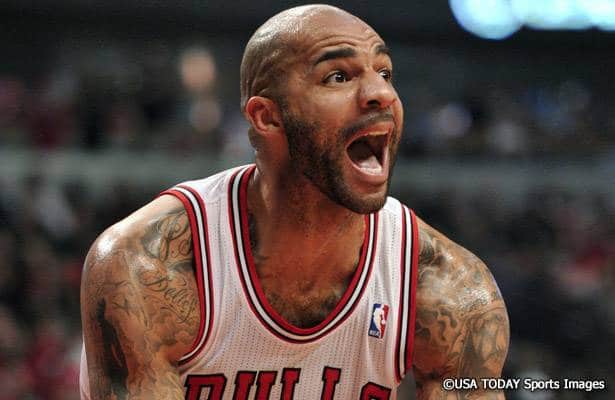 Death, taxes, and the Chicago Bulls using the amnesty provision to cut ties with Carlos Boozer this summer. All of them are about as certain as things come in life, though on the TNT broadcast of the Bulls/Nets game Thursday night, Craig Sager dropped a little bombshell that has since shaken Bulls fans to their cores:

Chicago might not amnesty Boozer this summer after all.

“After Luol Deng was traded to Cleveland earlier this year, Boozer began to wonder about his own future with the team,” Sager explained. “He told me tonight that he has been assured that he will not be traded by next week’s deadline, nor will the team buy out the final of his contract this summer unless they can land a superstar which is too good to pass up.”

It’s hard to know what exactly was said to Boozer and what, if anything, he embellished in his re-telling to Sager, who then retold it to the viewing public, but if “superstar” was the word that was used, one would be led to assume that Chicago would only eat the almost $17 million of Boozer’s contract via amnesty clause if Carmelo Anthony or LeBron James were to agree to sign with the Bulls.

If “superstar” really was the word used, the Bulls might actually be considering holding onto Boozer through the end of the 2014-2015 season.

That means Chicago could take a very different path than many expected over the course of the next 16 months.

With Boozer on the books, Chicago will have seven guys under contract next season making a shade over $63 million. Assuming the Bulls want to stay under the luxury tax, that would potentially take away their ability to bring over Spanish League star Nikola Mirotic, as well as their ability to go after a respectable free agent like Indiana’s Lance Stephenson. But by amnestying Boozer, the Bulls would be $20+ million under the luxury tax threshold, which gives them plenty of cash to use either on a max-level free agent or Mirotic and another middle-tier free agent like Stephenson.

Extending Taj Gibson for a little over $8 million per season was meant to serve as a bridge between Boozer and Mirtoic, but Gibson has already shown this year that he may already be the superior player, as he’s finishing a lot more fourth quarters than Boozer. By cutting loose Boozer, the Bulls could have Gibson and Mirtoic share duties at the four and make less money combined than Boozer currently does by himself. With Boozer on the roster, however, the Bulls will have almost $25 million worth of power forwards on the roster next season. That would be over a third of their payroll.

It probably amounts to whether or not the Bulls want to cut a check that large for Boozer when they could still conceivably get decent returns on the investment if they held onto him. They’ve paid guys before to just go away, but those players were nowhere near as productive as Boozer, nor were they as important as locker room leaders.

From Chicago’s perspective, there are reasons to keep Boozer next year and use the cap space for the summer of 2015 instead of paying all that money this summer for him to just go and play for someone else.

That just doesn’t fit the plan the Bulls seemed to have been formulating, especially in the wake of a Deng trade that was done to help create cap space for this offseason.

It has long seemed like the Bulls would use the amnesty clause on Boozer this summer, but maybe that’s not necessarily as chiseled into stone as many of us thought.

For a fair number of NBA fans, no part of All-Star weekend is more fun to watch than Saturday night’s dunk contest, and with good reason. A good many of All-Star weekend’s most iconic moments happened during that event: Dr. J and Jordan jumping from the free-throw line; Dominique Wilkins throwing down every conceivable form of windmill in his arsenal; Vince Carter defying the laws of physics in every way possible.

This is the stuff we remember, not only because those guys were the best dunkers, but because they were also huge stars when they put on those exhibitions. Terrence Ross did a nice job last year, but ten years from now it’s more likely we’ll file him in the same category as Desmond Mason and Fred Jones than Blake Griffin and Dwight Howard.

That’s why it’s so refreshing to see Paul George, John Wall, and Damian Lillard take part in the dunk contest this year after last year’s big excitement amounted to a severely disappointing dual between Gerald Green and James White. The influence of three All-Stars dunking this time around, however, extends beyond whatever dunks they may actually perform. This could be setting the stage for a rejuvenation of a competition that desperately needs it.

To the NBA’s credit, some rule changes this year should help making things more interesting. Teams, freestyle dunking sessions, a “knockout’ round, and fan votes would have spiced things up no matter who was dunking, but having George, Wall, and Lillard in the dunk contest has already gotten other stars talking about whether or not they’d ever do it.

LeBron James has been the only worthwhile dunker to really eliminate himself from this conversation. The way he talks, he’ll never do a dunk contest.

“I’m not against it. I just don’t want to do it,” James told Ethan Skolnick of Bleacher Report.

Beyond him, though, a lot of the league’s best dunkers have admitted that they’re not opposed to getting back into it.

Blake Griffin, for example, recently told ESPN.com’s Marc Stein, “I haven’t retired officially. It isn’t something I’ll never, ever do again. But for right now, I try to take my rest when I can. And this year I really wanted that Saturday night rest.”

Next year, though? It’s possible.

The same could be said for New Orleans Pelicans star Anthony Davis, whose viral video of a ridiculous dunk in practice earlier this week got fans excited about him as a future entrant, as well.

After the dunk, he excitedly grunted, “Put me in the dunk contest!” But who knows. That could’ve just been enthusiasm in the moment.

However we look at this, it’s important to notice a shift in the way the players are starting to view the dunk contest. Davis very likely made his video as a response to one of LeBron James doing similarly unbelievable things at a HEAT practice because Davis wanted to prove that he was better.

What better way to do that than to enter a dunk contest?

The time is coming where players will be tweeting videos of themselves doing crazy things around the rim a few weeks before the All-Star break, and some spirited trash-talking will get a whole bunch of these guys in the dunk contest together to prove who’s really the best. These are competitive dudes, but they’re also good friends from all their shared time in AAU and high school All-Star games.

It wouldn’t take much for a conglomerate of stars to decide they wanted to participate in the dunk contest. It’s really easy to see stars in the dunk contest as a more permanent thing, especially if this year goes well and one of the “big three” takes home the hardware.

Wall himself admitted on Friday, “If I wasn’t an All-Star, I wouldn’t be in [the dunk contest],” which means it might be easier for players to take part if they’re already there. But they’ve always been there and have chosen not to participate anyway. The culture had to change to get big names back in All-Star weekend’s most popular event, and it’s really starting to look like the culture has, in fact, changed.