Jimmer Fredette Running Out of Chances

It’s obviously very difficult to become an NBA player, but it’s even tougher to stick in the NBA or sign that lucrative contract every player covets. A long, successful career in the NBA is never guaranteed, no matter how successful a player was at another level or how high they were selected in the draft.

Jimmer Fredette is a perfect example of this. He was a household name during his collegiate career. As a senior at BYU, his games were must-watch television and he finished the season averaging 28.9 points, 4.3 assists, 3.4 rebounds and 1.3 steals. He carried the team, and there’s no question it was entertaining.

And, as I’ve mentioned in the past, his crazy numbers and seemingly unlimited three-point range even allowed him to briefly transcend the sports world and become part of pop culture. Lil Wayne dropped his name on the 2011 track Sure Thing (“I got a chopper and a trimmer shootin’ like Jimmer”). There were even entire songs about Fredette, with the most notable example being “Teach Me How to Jimmer” (which has millions of views on YouTube). 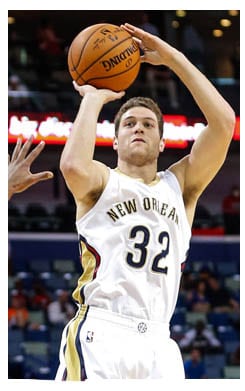 However, despite all of that early success and recognition, Fredette now find his NBA career in jeopardy. Through four years in the NBA, Fredette has averaged 3.6 points and 1.2 assists, while shooting 41.2 percent from the field and 38.1 percent from three-point range.

Since being selected by the Sacramento Kings as the 10th overall pick in the 2011 NBA Draft (a pick that many even questioned at the time), Fredette has bounced around the NBA quite a bit. This summer, he signed with the San Antonio Spurs, which will be his fourth team in five seasons. A number of players who were drafted after him back in 2011 have inked mega deals (such as Kawhi Leonard, Klay Thompson and Tobias Harris to name a few), but Fredette is on a one-year, minimum contract that is only partially guaranteed. That means if he doesn’t play well early in the season, San Antonio can waive him before his $947,276 salary becomes fully guaranteed on January 10, 2016 (and they’d only have to pay him $507,711).

This is the first year of Fredette’s career in which he’s made less than $2 million (since he was on his rookie-scale contract), but that kind of sums up how his career has gone to this point. While other players from his draft class are producing and earning more each season, his numbers and salary are decreasing.

In the NBA, Fredette just hasn’t been able to duplicate the success he had in college. As his averages show, he has struggled to score the ball. But it’s not just that, he hasn’t even been able to carve out a role as a three-point specialist in the league. He’s made just 192 threes total in his four-year career, which averages out to 48 per season (which would’ve ranked 168th in the NBA last year). Last season with the New Orleans Pelicans, he made just nine three-pointers in 50 games, shooting 18.8 percent from the field.

Not to mention, his biggest weakness is his defense. Last season, he ranked 391st of the NBA’s 474 players in Defensive Real Plus-Minus. He’s a liability on that end of the court, which is why it’s tough to keep him on the floor for long stretches; he has averaged 13.7 minutes per game over his four seasons, and the most minutes he’s averaged in a season was 18.6 as a rookie.

If Fredette were thriving as a scorer or even as just a three-point specialist, perhaps he’d earn more minutes (and have more teams interested and willing to overlook his defensive deficiencies). We see that happen in the NBA all the time. But when he’s barely contributing on offense and killing your team on defense, it’s hard to justify putting him on the court (or even signing him in the first place).

Fortunately for Fredette, Spurs head coach Gregg Popovich has a history of hiding poor defensive players. In fact, he has a name for this defensive scheme, which is named after his former player Vinny Del Negro.

“Some of the stuff we do on defense, we actually have one thing we call on the pin downs, we say we’re going to ‘Del Negro it’ and that’s in his honor and we’ve done that for 15 years,” Popovich said a few years ago. “We have a Del Negro defense out there because he couldn’t play a lick of D. At times we had to invent something just to hide him, so we call it ‘Del Negro’ and you do certain things on the court and everybody has to make up for that guy who’s the ‘Del Negro.’”

Signing with the Spurs was a very smart decision. In addition to Pop’s ability to compensate for struggling defenders, they have a history of turning scrap-heap players into key contributors and he’ll have plenty of weapons around him, which should give him open looks.

Fredette is dangerously close to being out of the NBA, so he really needs to emerge as a contributor with the Spurs this season – even if it’s just in a limited role – and carve out a niche for himself. His best bet is becoming a three-point specialist, since his shooting stroke has always been his best attribute.

He’s now 26 years old and if he has another failed stint or two, it’s possible that teams will stop offering those one-year deals and even the partially guaranteed money will dry up because teams will realize his failures haven’t been situational. A lot of executives and coaches like to believe that their franchise can be the one to turn a journeyman with some potential into a productive player, but that belief tends to diminish more and more with each failed stint a player has had with a new team.

It’s very possible that Fredette could thrive in San Antonio and this article looks silly one year from now (and, for Fredette’s sake, I hope that’s exactly what happens). The Spurs are excellent at turning another team’s trash into their treasure.

Bruce Bowen went undrafted and played for three French teams, two CBA teams and three other NBA teams (the Miami HEAT, Boston Celtics and Philadelphia 76ers) before he joined San Antonio, became a key piece on three champion squads and was named to the NBA’s All-Defensive team in each of his eight seasons with San Antonio.

For a more recent example, Danny Green believed his NBA career was over just before he signed with the Spurs in 2010. He was selected with the 46th overall pick in the 2009 NBA Draft by the Cleveland Cavaliers, but struggled with them and was waived just 20 games into his rookie season. After that, Green suited up for three different D-League teams and has said he believed he’d be forced to spend the rest of his career overseas if he wanted to make a living playing basketball. However, the Spurs signed him in November of 2010, he had a stint in Slovenia during the NBA lockout, returned to San Antonio right after and the rest is history. Now, he’s an NBA champion and one of the better two-way shooting guards in the game.

Fredette could end up being San Antonio’s latest reclamation project. Again, the fact that he’ll get open shots and be surrounded by quality defenders bodes well for him. He just needs to make the most of this opportunity playing for one of the NBA’s best teams in order to give him some security going forward.

If he does struggle once again this season, he may be relegated to either playing overseas or trying to make a team via a 10-day contract or training camp deal going forward. There are quite a few people in NBA circles who believe that Fredette simply isn’t an NBA-caliber player. His name and the hope that he still has some untapped potential has given him a number of opportunities, but he’s running out of opportunities to prove himself.

If you missed it last night, the latest episode of the Basketball Insiders Podcast dropped. In this installment, Steve Kyler and Eric Pincus discuss the trade rumors surrounding Jamal Crawford and what deals could make sense for the Los Angeles Clippers, Tristan Thompson’s negotiations with the Cleveland Cavaliers and much more. Listen here: