Jason Smith talks about the New York Knicks’ disappointing season, where the team goes from here and more in this exclusive interview with Basketball Insiders.

Leonard Becoming Face of the Spurs 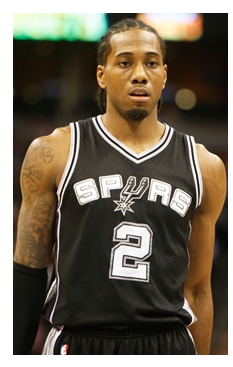 The same stoic face that he has on the court and in press conferences is exactly how he looked with family and friends at a New York hotel hours after being drafted by the San Antonio Spurs in 2011. On one of the most exciting nights of his life, he had the same blank stare on his face while others celebrated around him.

That’s just Kawhi. Don’t confuse that look with apathy when it comes to basketball. Just because he doesn’t jut out his jaw like Kobe Bryant or snarl like LeBron James doesn’t mean anything. He may be shy, but he’s an intense competitor with a relentless work ethic and a desire to be great.

Before the draft, he practically lived in the gym at Impact Basketball in Las Vegas. He rarely spoke, but he always showed up and worked hard. Leonard would go through drills, play in pick-up games and then spend the rest of the day working on his shot. His jumper was considered his weakness during the pre-draft process, and he was determined to turn it into a strength.

Leonard is one of the the most mature 23-year-olds you’ll meet, to the point that it’s easy to forget just how young he is. He is the perfect player for the Spurs organization because he is defensive-oriented, always puts the team first and hates talking about himself. Today’s NBA stars are international celebrities with huge endorsement deals, side projects in acting, fashion and music, and attention placed on their every move.

That is, except for San Antonio’s stars.

This isn’t a coincidence, as the organization specifically targets players who don’t care about all of that. They want players who fit their culture. Future Hall of Famer Tim Duncan could have all of the endorsements and fame in the world, but he doesn’t choose to pursue it. He wants one thing: championships. San Antonio looks for similar players when they’re considering draft prospects and free agents (with few exceptions). Players who care about their success and stats before winning don’t fit in San Antonio.

Gregg Popovich likes to keep players grounded, reminding them their profession “is just basketball” and adding that there are many other jobs actually worthy of praise – such as those who risk theirs lives defending others (remember, Popovich served five years in the Air Force). Many star players grew up with coaches, friends, agents, runners and other hanger-ons telling them that they’re great and building up their self esteem. Popovich wants to bring them back down to earth and make sure nobody on the Spurs takes themselves too seriously or buys into their own hype. In fact, throughout this season, Popovich has explained Leonard’s improvement and individual success by saying that “he’s gotten over himself.”

That’s an important step to becoming the (stoic) face of the Spurs and, make no mistake, that’s exactly what Leonard will be in the very near future. Soon, Duncan, Tony Parker and Manu Ginobili will be gone, and Leonard will be the franchise’s cornerstone.

One could argue that the passing of the torch has already begun, to some degree, with Leonard winning Finals MVP last season and at times putting the Spurs on his back throughout this campaign.

Last month is a great example of that, as Leonard averaged 19.3 points, 7.3 rebounds, 2.7 assists and 2.7 steals in March. Recently, the Spurs have been the league’s hottest team – winning 11 straight games with a double-digit average margin of victory – and Leonard has been a big reason why. During their 11-game winning streak he has put up similar numbers to the ones he posted in March, averaging 19.2 points, 6.1 rebounds, 2.5 assists and 2.6 steals while shooting 56 percent from the field and 45.1 percent from three.

The playoffs are approaching, and that seems to be the time when Leonard steps up and shines, as evidenced by his coming out party last May and June.

“He’s playing great right now, and I think his confidence is building,” Duncan told The New York Times when asked about Leonard. “He understands what his role is, and we’re riding him right now. He’s been playing unbelievably, and he’s been the driving force behind us these last 10 or 15 games. Hopefully he can do what he does over these last few games, and we’ll continue to support him.”

Popovich agrees that Leonard has been much more confident in his fourth professional season, which is normal for NBA players who get comfortable after several years of going through the NBA grind and expanding their individual skill set. Leonard admits that the game has slowed down for him every year he has been in the league. It certainly seems he’s making the leap from potential star to actual star.

“He’s just becoming more confident in what he does,” Popovich told The New York Times. “It’s just feeling a little bit more natural and not forced. He understands that I trust him. We go to him a little bit more.”

While Leonard has been dominant over the last month and has been a huge reason for the Spurs’ late transformation into a terrifying team that nobody wants to face in the postseason, he refuses to talk about his individual success.

The most Leonard will tell The New York Times when asked about his excellent play is, “Once you have a whole group on the same page, each individual tends to play better.”

The perfect answer for the perfect face of the Spurs.

This season hasn’t gone according to plan for anyone in the New York Knicks’ organization.

Entering the 2014-15 campaign, those around the franchise expected to be a playoff team. Phil Jackson and Derek Fisher brought optimism to Madison Square Garden and because the Eastern Conference was weak, some felt the Knicks could once again sneak into the postseason. After all, two years before they had won 54 games with largely the same roster. Why couldn’t New York be in the fight for the eighth seed? Veteran big man Jason Smith (in the video at the top of this article) said that he entered the year believing this was a playoff squad.

What nobody expected was for the Knicks to have the worst record in the NBA. New York is currently 16-64, which is tied with the Minnesota Timberwolves for the league’s worst mark. While this awful season will allow New York to land one of the top picks in the 2015 NBA Draft and add a potential star (such as Jahlil Okafor, Karl-Anthony Towns, Emmanuel Mudiay or D’Angelo Russell), it has been a headache for everyone involved – from players to coaches to fans to media.

Cleanthony Early, the team’s 34th overall pick in the 2014 NBA Draft, lost just 10 regular-season games during his collegiate career at Wichita State. He matched that total three weeks into his NBA career, as the Knicks started the season 3-10.

While this year has certainly been a struggle, Early says that it has been a learning experience for him on and off the court.

“I’ve grown a lot,” Early told Basketball Insiders. “I would say more mentally, but physically as well. It’s been a rough, up-and-down year, especially with injuries and us not doing too well, but it definitely gave me [an opportunity] to grow.”

Injuries have limited the rookie to just 37 games this season, but when he has been able to play, it’s clear that he has gotten better as the season has progressed.

He played his best basketball in March, when he averaged 8.2 points and 3.4 rebounds in 21.7 minutes per game. He had an 18-point, four-rebound performance against the Los Angeles Clippers last month, and a number of other games where he showed off his well-rounded game by contributing in a number of ways and filling the stat sheet.

“At first, you realize [the NBA competition is] a lot more athletic and faster,” Early said. “That was in the beginning. It definitely feels like the game is slowing down now.”

Just as the young players are learning and trying to adjust to the league, so is Coach Fisher. He entered this season with zero coaching experience on any level, and has taken his lumps in his first year as a head coach.

Early says that his relationship with Fisher has been “good,” and adds that the rookie forward and rookie coach have both tried to spend this season growing.

“He’s a new coach,” Early said of Fisher. “I’m learning and he’s learning, so we are just doing that together.”

This offseason, the 23-year-old Early is determined to expand his game and continue to grow as a player.

“I’m going to work on pretty much everything – becoming more consistent with my shot, playing lower, defending, handling the ball, making reads off of certain plays and things like that,” Early said.

Even though the Knicks have lost so many games this year, Early and his fellow young teammates have tried to stay optimistic about the future and look for positives throughout the season. The fact that young guys like Langston Galloway, Alexey Shved, Tim Hardaway Jr. and Early have shown glimpses of the talented contributors they can be down the road is one bright spot for New York.

“There is a lot of optimism, especially with the signs that we have shown, with our energy, playing hard and just being talented,” Early said of the team’s young players. “I think we have the right pieces and I think we will continue to gain more pieces. Our core guys will continue to develop and help this organization.”