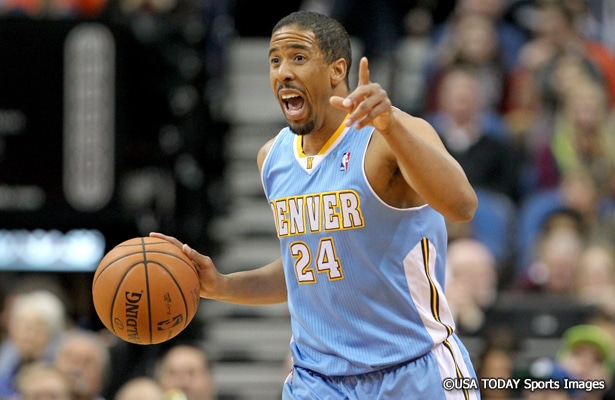 As expected, with just nine days remaining until the NBA’s trade deadline, activity around the league is starting to pick up. Here’s a look at the latest talks to come across the wire.

The Wizards went out and signed Eric Maynor this offseason in hopes that he could serve as a quality backup for John Wall and help them keep his minutes manageable. Maynor was regarded as one of the more reliable backup point guards in the league prior to his arrival, but he has not lived up to the billing with the Wizards. He’s only averaging nine minutes a contest and the backup point guard position remains a major area of concern for them.

According to Zach Lowe of Grantland, the Wizards would ideally like to take Andre Miller off of the Denver Nuggets’ hands. Miller clashed with first-year head coach Brian Shaw around the start of the New Year and has not been with the team since. However, the Wizards have not presented the Nuggets with an attractive enough offer yet. Miller has a favorable contract that only costs $5 million this season with only part of next year’s $4.6 million guaranteed.

The problem is a backup point guard is also a need of the Nuggets. Obviously, it’s not bad enough to sooth matters over with Miller, but they definitely need some help at the position with Ty Lawson ailing and Nate Robinson out for the year after suffering a torn ACL.

If the Wizards are going to get their guy in Miller, they’ll likely need to find a third team that can help answer the Nuggets’ needs more than they can. The Sacramento Kings are also in the market for a backup point guard, specifically being linked to Miller as well.

Miller isn’t the only Nugget coveted by another team. The Knicks have long had eyes for Nuggets forward Kenneth Faried and are trying to restart those talks, according to Marc Stein of ESPN, but up to this point he has been deemed unavailable by the Nuggets.

It’s hard to wonder whether that stance has lightened in recent weeks, though. While it does look like the Nuggets are going to be without JaVale McGee for the rest of the season, they still have somewhat of a logjam on the frontline with Darrell Arthur, Quincy Miller, J.J. Hickson and Anthony Randolph. Plus, Faried’s been somewhat underwhelming this season, producing at right around the same rate he was last season rather than taking a big step forward like the Nuggets had hoped and many projected.

The Knicks still appear to be willing to exchange Iman Shumpert for him. Almost like a shooting guard version of Faried, Shumpert brings a defensive mindset, a lot of athleticism and great energy. The Nuggets could use some help in the backcourt, even though Shumpert isn’t a point. Both are young with plenty of room to still improve, but a change in scenery may be a necessity in order for that to happen.

Brandon Bass Could be Moved

According to Sporting News, Boston Celtics forward Brandon Bass was nearly dealt earlier this season to the Houston Rockets in exchange for Omer Asik. The Rockets were at one point set on dealing Asik, but ultimately ended up bypassing their self-imposed deadline because they didn’t find a deal to their liking.

While the Rockets may not have been willing to settle for a deal centered around Bass then, there are a couple of other teams who are interested in trading for him. Bass has been linked to the Golden State Warriors, Charlotte Bobcats and Phoenix Suns.

Bass is making $6.4 million this season and $6.9 million next year before becoming an unrestricted free agent. He’s putting forth a strong campaign this season, putting up 10 points and six rebounds in 27 minutes a night.

The Celtics have additional assets that they can package with Bass, including the $12 million expiring contract of Kris Humphries in the case that they wanted to make a major move. The Celtics are also in the market to rid themselves of the long-term contracts of Gerald Wallace and Jeff Green, so expect to hear their names linked to a lot of talks until the deadline passes. Despite all the talk surrounding Rajon Rondo, his spot on the team past the deadline seems to be a near certainty right now.

Update on Derrick Rose: The Chicago Bulls are going to be without Derrick Rose for the rest of the season due to a torn meniscus in his right knee. Due to the fact that this is his second consecutive major knee injury, a lot of eyes are going to be on Rose as he once again looks to come back from a serious setback.

The Bulls came out and said Tuesday that they do not expect Rose to even practice with the team for the rest of this season, but there was some positives relayed.

“He’s running on a treadmill,” Bulls head coach Tom Thibodeau said to ESPN. “Making a shot here or there, he’s doing well. He’s doing fine. He’s still nowhere close to practicing or anything like that, but he’s doing well overall.”

“He’s doing a lot more than just shooting around,” Noah said. “He’s in the gym non-stop. Just working on his body, getting better, getting better, and that’s what it’s all about. He’s a big part of this team, and he has that mentality of just having no regrets. Just giving everything you got. If you can go, you can go, and if you can’t you did everything you could to make it. That’s what it’s all about.

“He’s working really hard,” Noah said. “He’s always around the team. Being a great leader, showing support to his teammates and just watching him work every day. I think it’s just extra motivation for us to go out there and go harder.”

The door may be shut for a potential Rose return right now, but the playoffs are still over two months away. Not even Rose knows how he is going to be feeling at that point and time, but one thing we do know for sure is that sitting out the playoffs for a second straight year will be as difficult as anything he’s ever had to endure in his career up to this point.