After emerging as the face of the Trail Blazers franchise and spending nine total seasons in Portland, LaMarcus Aldridge decided to join Kawhi Leonard in San Antonio to lead the Spurs into the post-Tim Duncan era.

For every action, though, there is a reaction. As quickly as a legitimate contender has been built in San Antonio, one has been dismantled in Portland. Of that, Blazers general manager Neil Olshey made no secret. 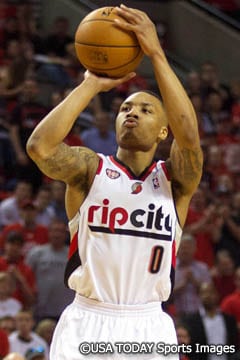 “We were preparing for it,” Olshey said in Las Vegas. The Blazers will now go young, featuring two-time All-Star Damian Lillard and new faces in Noah Vonleh, Mason Plumlee, Gerald Henderon, Ed Davis, Al-Farouq Aminu and Moe Harkless among others.

For a team that was considered a legitimate contender as recently as six months ago, the contrast is startling. Aldridge’s departure, though, represent a true divergence of the road. The Blazers could have re-signed the other members of their core—Arron Afflalo, Wesley Matthews and Robin Lopez—or commit to getting younger and fully building around the promise of Lillard.

The franchise opted for the latter.

“We had a lot of veteran free agents, but it was all based on LaMarcus’ decision,” Olshey said of the decision behind not matching the offers the other veterans received.  “We had brought some guys in prior to July 3 when LaMarcus informed us he wasn’t coming back that we felt like could play either way. They either could be really good additions to our current group or they could be guys we could move in another direction with based on LaMarcus’s decision.

“We were preparing for this opportunity… When LaMarcus warned us he wasn’t coming back, we went full board with guys on the same career arc as Damian Lillard. Damian is our best player right now. He’s a two-time All-Star and we are going to bring in players that complement [his] skill set.”

Now, the hope in Portland is that Harkless—a 22-year-old entering his fourth pro season—can be one such player. Olshey and his staff have been tracking Harkless dating back to the months preceding the 2012 NBA Draft. When the opportunity presented itself to add him (for a 2020 heavily protected second-round pick) to what is a suddenly young core in Portland, Olshey jumped at it.

“Moe was very high on our board a few years ago in the draft and we were excited about him,” Olshey said. “He fits our model right now. He’s an emerging young player and he’s got a lot of talent. We think his best days are ahead of him as a basketball player; we have a lot of faith in our player development staff and our coaches to make sure guys hit their ceilings.”

Traditionally, player development has been a strength of the basketball staff in Portland. Zach Randolph, Nicolas Batum, Alridge and Lillard are just a few of the young players who found consistent productivity in Portland, and now, the hope for the franchise is that Harkless can be another positive statistic in that regard.

“We know Moe is not even close to his ceiling at this point, so he’s going to get a great opportunity with us to be the player we all loved coming out of the draft,” Olshey said.

This summer, Lillard signed a five-year, $120 million extension to remain in Portland through at least the conclusion of the 2020 season. As one of the top young guards in the league, Lillard has emerged as the face of the Blazers. As Aldridge has committed to leading the Spurs past Duncan’s departure, by default, Lillard has been entrusted to do the same in Portland. It is, however, a challenge that he willingly accepted.

“Dame committed as long as he possibly could,” Olshey said.“He’s committed to our organization. He wants to be in Portland and I think Dame wants to be surrounded by guys that want the same thing as him.

“[He] wants to play with guys that want to be in Portland. I think we saw that when Damian signed a contract with no options. Right now, the glamor thing is try to get out as quick as possible and have flexibility,” clearly, though, as Olshey points out, that was the last thing on Lillard’s mind.

For the Blazers, it is time to move forward. With a roster that averages around 24 years of age per player, only the Milwaukee Bucks, Utah Jazz and Philadelphia 76ers are younger.

As the season progresses, Olshey will continue to look for opportunities to add talent, but for now, the franchise likes the young pieces it has assembled.

“We are going to be active,” Olshey admitted. “We are going to continue to try and build the roster and acquire assets. Absent LaMarcus Aldridge, that group was not going to be good enough, and we judge ourselves by high standards and if we can’t compete at the highest levels, then we need to go in another direction. That’s what you see us doing.”

Indeed, a new day has dawned in Portland. Without Aldridge, led by Lillard and some promising acquisitions, Olshey and his Blazers are in the midst of a youth movement. They will be aided by the fact that they have a dearth of long-money contracts on their books and will once again attempt to build a contending team—something that, historically, in Portland, has not been a problem.