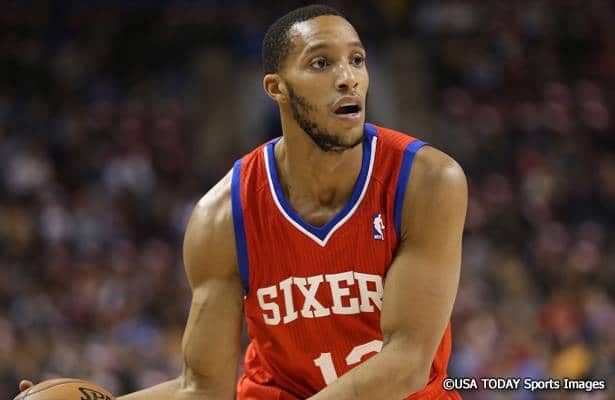 The Philadelphia 76ers are open to trading forward Evan Turner and the Charlotte Bobcats have looked into acquiring him, an NBA source confirmed to the Observer Monday.

Turner, a 6-foot-7 forward, averages 18.1 points and six rebounds this season for the 76ers. He could potentially add the scoring punch the Bobcats need to reach the playoffs for only the second time in their decade-long history.

The question becomes what the Bobcats would be willing to offer, considering Turner would become a restricted free agent this summer. The team with his rights would have to make Turner a qualifying offer of about $8.7 million to restrict him.

The Bobcats have assets they could throw into trades. They could have as many as three first-round picks in what should be a rich 2014 draft – their own and picks potentially owed them by the Portland Trail Blazers and Detroit Pistons.

via Rick Bonnell of the Charlotte Observer

In yesterday’s NBA PM, we covered that the 76ers are stepping up efforts to trade Evan Turner. The Oklahoma City Thunder and Phoenix Suns were mentioned as teams that had expressed interest in the 25-year-old, but the Bobcats make sense as well.

Throughout the season, rival executives have identified Charlotte as a buyer since the team is determined to end their playoff drought.

The Bobcats are certainly a team to watch as the Feb. 20 trade deadline approaches. Whether it’s Evan Turner or another significant contributor, they’re looking to make an addition to their roster and they have the assets to do it.

Turner knows that his days in Philadelphia may be numbered. On Monday evening, Sixers head coach Brett Brown told reporters that it was “an incredible surprise” to still have the “team intact this late in the year.” That tells you what things are like in Philly at the moment.

Could Exum Force His Way to Lakers?

via Jabari Davis of Basketball Insiders

While Dante Exum hasn’t given any indication that he’ll force his way to the Lakers, it’s certainly a possibility. He’s making it clear that he’d love to play in Los Angeles, and the fact that he wants to pick Kobe Bryant’s brain and has signed with Bryant’s agent, Rob Pelinka, is interesting.

If Exum does attempt to force his way to the Lakers, he has some leverage. Not only can he choose not to work out for other teams, he could threaten to sign overseas rather than coming to the NBA.

While another team could still pick him, it would be very risky since he could pull a Fran Vasquez and not sign. With a draft class this talented, it would make more sense for other teams picking early to draft another star prospect rather than drafting Exum, who may not come to the United States.

It will be interesting to see what Exum does during the pre-draft process.

via Mike Bresnahan of The Los Angeles Times on Twitter

Yesterday, in this space, we covered the trade talks between the Lakers and Suns. It seems that the deal makes sense for both sides, but today we got this update about why the talks have stalled.

The Lakers want a better first-round pick for Pau Gasol. The Suns could have as many as four first-round picks in the 2014 NBA Draft, as we showed in our latest mock draft. However, their highest pick is in the mid-teens and apparently that’s not good enough for the Lakers.

It’s possible that Phoenix’s pick could improve between now and the trade deadline. If not, this trade could be salvaged if the Suns throw in a second pick or a young asset, but they may not be willing to give up that much for a player who is turning 34 years old this summer and able to leave as an unrestricted free agent.

It’s possible that the Suns will decide to take Emeka Okafor’s expiring contract and one of their first-round picks and see what else is out there.

For what it’s worth, rival executives have complained for awhile about the Lakers overvaluing Gasol and asking for way too much in trade talks involving him. Now, with Gasol on an expiring deal, the Lakers have less leverage.