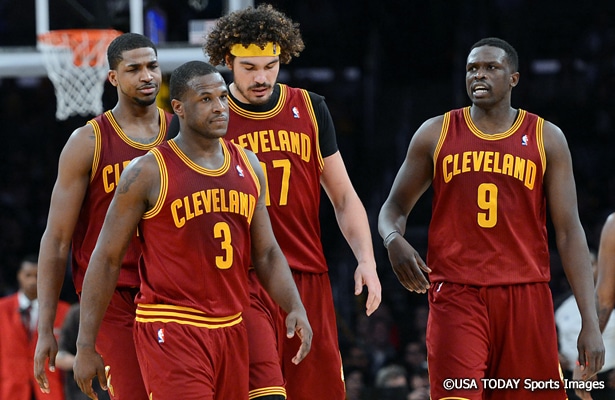 Via Bob Finnan of The New Herald & The Morning Journal

This may be the first time that Griffin is completely in charge of the team, but he’s working the media like a seasoned veteran in this case. This is part of the game all executives play because if it’s clear that you’re trying to get rid of assets, you’re never going to get good value for them.

He’s only in this position in the interim. There’s no guarantee that he’s going to be offered the full-time job; in order to make that happen, he has to prove his worth and make the necessary moves for this team to go on a strong second half run.

If owner Dan Gilbert wanted to see the status quo maintained, he never would have fired Chris Grant. Griffin is not there to conduct a fire sale, but if he doesn’t make some kind of move, his chances of having the interim tag removed can’t be high.

The Cavaliers have been playing better in limited action since Grant’s firing, picking up respectable wins against the Washington Wizards and Memphis Grizzlies, which could help his leverage a bit. The Cavaliers have four games left before the trade deadline, all of which are against non-playoff teams.

Coach Lionel Hollins tells @CSNNW “Of course I’m interested” in the Detroit head coach job. Though he has not communicated with them, yet.

Via Chris Haynes of CSNNW

Immediately after Cheeks’ dismissal, there was talk that Hollins’ interest in the job was so great that he would consider taking it even at this late junction of the season. The Pistons are only a half game out of the playoffs, though, and opted to just make Cheeks’ assistant John Loyer the interim head coach for the rest of the season.

The risk the Pistons take here is that there is likely going to be more openings at the end of the season and Hollins could also be at the top of their lists. He wasn’t going to come cheap either way, but he just jumps out as such a good fit for this roster that waiting until the offseason to do a full-fledge search seems unnecessary.

“I just took a knee to the spot I broke my leg,” Nash told reporters. “It just really flared up on me. I don’t think it’s going to be long-term thing.”

Nash speculated that he could even practice as soon as Monday, but until he’s out on the floor showing no signs of being hurt, there’s going to be a concern just because of how his tenure with the Lakers has gone. Nash has struggled mightily with injuries over the last season and a half, regularly missing original return dates.

Nash played in three of the last four games for the Lakers and played quite well for someone who just turned 40 years old and has been hurt for the majority of the season. He had 19 points, four rebounds and five assists in a win against the Philadelphia 76ers.

Even if he does make a quick return, they’re still quite limited due to injuries as Kobe Bryant, Jodie Meeks, Jordan Farmar, Nick Young and Pau Gasol are still out of the lineup.