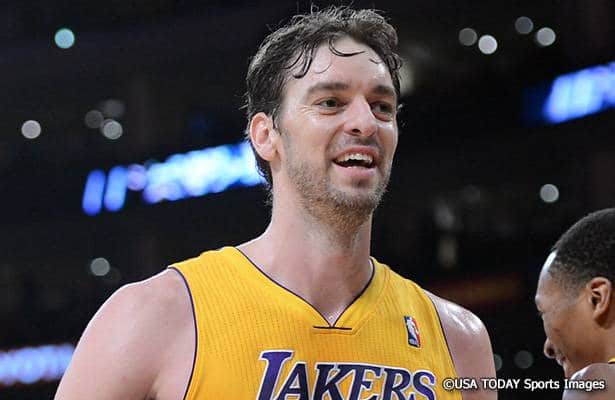 The Phoenix Suns have stopped talks to acquire Pau Gasol because they feel the Lakers want too much for the veteran post player, according to a person familiar with the situation. Phoenix could own four picks in the June draft, and the Lakers coveted one of the more valuable two — the pick the Suns could potentially get from Minnesota or the one they might receive from Washington.

Lakers do not believe talks with Phoenix for Gasol are over, I’m told. Expect talks with Suns and other teams to cont until 2/20 deadline

This is a classic case of public posturing. No trade talks are truly dead until the February 20 deadline passes, and the fact that news broke today that Gasol will be out for two weeks certainly didn’t motivate Phoenix to meet the Lakers’ asking price.

With four first-round picks in the upcoming draft, the Lakers are understandably trying to pry away at least one of them. Meanwhile, the Suns know that they’re helping them save money and that the market for Gasol is limited. No team has the potential to give the Lakers the combination of draft assets and cap relief like the Suns do.

One side is likely to blink before the deadline. It’s just a waiting game to find out who.

Pacers Happy With Hill, For Now

“We feel great about George Hill. … For us George Hill fits us perfectly because he’s a great catch-and-shoot player and he gets us in our offense, and Lance (Stephenson) and Paul (George) are such good playmakers.”

Via Candace Buckner of the Indianapolis Star

Hill is the kind of guy whose statistics (10 points, three rebounds, three assists) don’t tell the entire story of his impact. They don’t reflect how well he defends, or how great he is at keeping the offense flowing properly. Internally, though, as Pritchard’s comments reflect, they think very highly of him.

The Pacers are playing far too well this season to make a move that would impact Hill’s spot in the rotation, but this offseason they may not have a choice but to explore moving him. With Stephenson playing at a near All-Star level, keeping him has clearly become a priority. By letting Danny Granger walk, the Pacers will be able to offer Stephenson a contract similar to George’s in the $8 million annual range, which he’s almost sure to receive more than in the open market.

Stephenson was a second-round pick coming out of Cincinnati; now he’s one of the best shooting guards in the league, a near All-Star this season. This is his chance to really cash in on his hard work, and as much as he’s made it clear he wants to remain a Pacer, it would be a bad business decision to take too big of a discount to stay there.

By finding a way to trim George’s salary in a cost-cutting deal, the Pacers could free up the last bit of additional space they need to in order to come close enough to market value to keep him. They may experience a drop off at point guard, but it wouldn’t be anywhere near the same drop off as it would be if they had to replace Stephenson.

Kansas 7-footer Joel Embiid told ESPN that he is far from a lock to leave college after this season, and is “strongly considering” returning for his sophomore campaign.

The Cameroon native said prior to Tuesday’s win at Baylor that he didn’t feel as though he was ready to make the jump to the NBA, but added after the game that it will depend largely on his development over the remainder of the season.

via Jeff Goodman of ESPN

This is the second time that Embiid has publically stated he may pass on the NBA Draft for at least another year. The first time he cited the success of all-time great big men Tim Duncan, Hakeem Olajwuon and Shaquille O’Neal, all of which stayed in college for multiple years.

This is a different day and age though. Leaving early is the trend, staying while you’re a likely lottery pick is almost unheard of. When you’re projected to go number one like Embiid is, there’s not supposed to be any thought about it, you’re just supposed to go.

Leaving early just recently became a possibility, as he was originally viewed as a multi-year project. But, he’s improved at a rapid rate. If he stays, it’s because he truly feels he’s not ready. NBA teams have seen more than enough to believe otherwise, but they’ll be just as interested next June if he continues on his current development path.