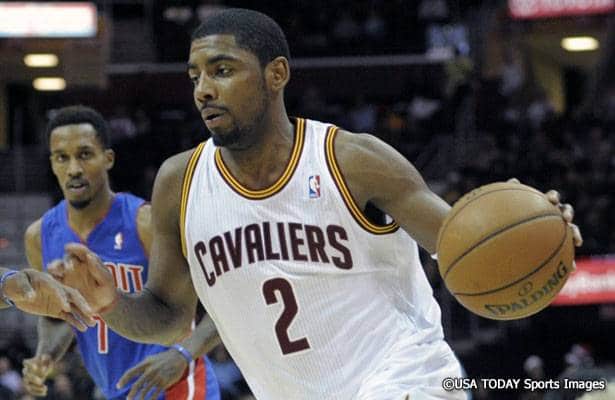 Throughout the course of the 2013-14 NBA season, Cleveland Cavaliers point guard Kyrie Irving has been criticized left and right, and deservedly so at times. Entering this season, Irving spoke about having a breakout campaign and taking his game to the next level. While he was voted an Eastern Conference All-Star starter by fans, he has left a lot to be desired on the court.

Irving’s numbers are down from last year, as he’s averaging less points, rebounds and steals while shooting career-lows from the field and three-point range. Not to mention, the point guard has struggled to slow down his opposition. Also, according to reports, his immaturity has been an issue and he doesn’t seem to take responsibility for his mistakes.

All of these concerns, combined with the Cavaliers’ worse-than-expected 16-30 record, have made Irving a target for criticism. When Chad Ford of ESPN recently wrote that Irving has been privately telling people that he wants to get out of Cleveland, many Cavs fast lost it. This was the final straw.

However, Irving denied the reports after Thursday’s game against the New York Knicks, saying that he’s happy to be in Cleveland and adding that he believes he’s going to be there for a long time. Irving also recently opened up to Jason Lloyd of the Akron Beacon Journal to candidly discuss this difficult season, the rumors and much more.

Irving believes that this recent wave of criticism and tough losses has been good for him.

“I needed this,” Irving told the Beacon Journal. “It was more or less a wake-up call. I got away with so much my first two years. It wasn’t a breeze, but everything came easy. This is the first year where every single night it’s going to be a challenge. That’s one of the things I’m getting used to and I’ve accepted.

“The numbers don’t suggest it, but for me, this is the first year I was really challenged the whole entire year. I spent the whole entire summer preparing as much as possible to be in this position. It was a lot harder than I expected. That’s part of life and part of this game. It’s growing up.”

Because the expectations are so high for Irving, the former No. 1 overall pick, it’s easy forget that he’s only 21 years old. With this in mind, it’s no surprise that he’s had some bumps in the road as he grows up. Irving wishes he could singlehandedly fix the Cavaliers’ issues, but he doesn’t have all the solutions.

“I just feel like what people fail to realize is I don’t have all the answers all the time,” Irving said. “I’m still the third-youngest on this team. I’m a 21-year-old kid trying to figure this whole thing out. It’s a daily job and that’s probably why it’s been one of the toughest years for me. I’m learning every single day.”

»In Related: Could a Carmelo Anthony Trade Benefit Bulls and Knicks?

When asked about his body language and pouting during losses, Irving defended himself.

“I’ve never been known for pouting,” Irving said. “Just because I don’t smile on the court when we’re losing, I don’t think I’m supposed to smile. You smile on the court, that’s a problem, especially when you’re losing like this. I think last year my morale definitely changed just from being frustrated and hurt all the time the second half of the season.”

Rumors – such as Ford’s report that Irving is planning to leave Cleveland – may be the toughest thing for a young player to deal with. Drama is never fun, and that’s exactly what these kinds of rumors create.

“Everybody has all these rumors and stories they’re coming out with and it’s all based on me,” Irving said. “It’s not really about me. It’s about the team and what we’re going through as a team together. Obviously, some things will be put on me and I take responsibility for that, but all that extra stuff that comes with it. … It’s the business. I understand that. But that’s one of the things I wish I could change. It’s definitely not about me, it’s about my teammates and what we can accomplish.”

Last night, Brian Windhorst of ESPN reported that the Indiana Pacers are expected to sign Andrew Bynum after meeting with him on Friday. The move will likely be official in the coming days, as long as there aren’t any medical hiccups.

Immediately after news of this transaction broke, people started wondering what this meant for Indiana. If Bynum is healthy and focused, he gives them a tremendous duo of seven-footers in Roy Hibbert and himself.

»In Related: Would Andrew Bynum Make the Pacers Favorites in East?

Remember, it wasn’t long ago that Bynum was considered one of the best centers in the league. During his final season with the Los Angeles Lakers, he averaged a career-high 18.7 points and 11.8 rebounds, and posted the best efficiency rating of his career (23.00), which ranked ninth among all NBA starters. Only LeBron James, Chris Paul, Dwyane Wade, Kevin Durant, Kevin Love, Dwight Howard, Blake Griffin and Derrick Rose finished with higher PERs. Also, Bynum is still just 26 years old and his resume is certainly impressive, with two championship rings, an All-Star appearance and All-NBA Second Team honors under his belt.

If Bynum is 100 percent and kept in check by the Pacers’ strong veterans, this could be a very good addition for Indiana. Even if Bynum doesn’t produce at a high level in Indiana, signing him just so he didn’t return to form with the Miami HEAT or Los Angeles Clippers was probably smart. This was a low-risk, high-reward move and only time will tell if it paid off.

On Friday evening, Basketball Insiders’ senior writer and editor Yannis Koutroupis released the latest 2014 NBA Mock Draft. Every other week, he puts out a new two-round mock draft to show how players are trending throughout the course of the season. Check out the latest version of Yannis’ mock at this link or by clicking the graphic below. 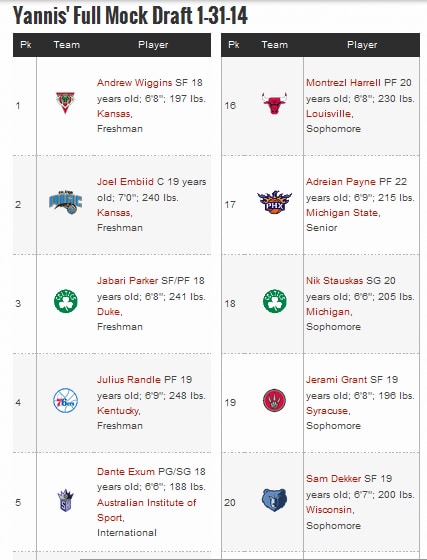