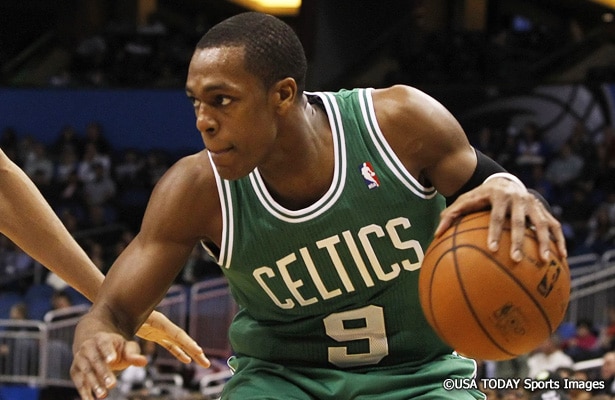 Now that Boston Celtics All-Star point guard Rajon Rondo is back on the NBA hardwoods following an ACL injury that kept him out of action for almost a year, trade rumors are again starting to swirl. Those rumors always seem to be coming from places other than Boston, where Celtics GM Danny Ainge has been consistent in saying he’s not looking to trade Rondo. The fact that he took the court for thee first time this season sporting a team captain’s “C” on his jersey would seem to add credence to the idea that Rondo is not quite finished as a Celtic.

Still, Rondo’s name does keep coming up, which means someone has discussed moving him on some level, even if that level is simply the Celtics organization gauging his value.

One team that consistently brought up in reference to a Rondo trade is the Houston Rockets, largely because the gaping hole in their lineup is at point guard. Jeremy Lin hasn’t been able to prove that he can run Houston’s offense at a championship level, and has lost his starting role to world traveler Patrick Beverley. Beverley is far from a household name outside of Clutch City, but he is a game-changer who has a clear positive impact on Houston’s attack. His first game back after an injury saw him lead the Rockets to an upset of the Portland Trail Blazers, a game in which he scored 17 points and the team was +26 with him on the court. Next time out he managed just six points against the Sacramento Kings, but the Rockets were an impressive +31 with him on the court.

That’s what Beverley does. He mixes things up on the offensive end, presses constantly on the defensive end and basically does all of the little things that make his team better. The question, however, is whether Beverley can do those things when it matters most – when it’s San Antonio’s Tony Parker or Oklahoma City’s Russell Westbrook coming at him in a seven-game series.

This is where Rockets fans start to get excited by Rondo trade rumors. Rondo is one of the best defenders in the NBA, when healthy, and he racks up assists at an impressive clip. He would unquestionably helps the Rockets’ biggest Achilles’ heel: their defense. He isn’t an ideal fit on the offensive end because he’s not a great shooter. His defender could easily sag off of him and make it harder to get Dwight Howard the ball, or cheat over to cut of James Harden’s lane to the basket. Still, Rondo’s contributions on the defensive end, where the Rockets need the most help (and especially in the backcourt) would be extremely valuable.

Assuming the Celtics are looking to move Rondo, however, it’s still difficult to see him landing in Houston. When the Rockets cleaned house to make room to sign Howard to a max contract, it meant that they gave up most of their trade assets. Only Howard, Harden, Lin and Omer Asik have significant enough contracts to get into a Rondo-like discussion, and it’s absolutely clear they will not move Howard or Harden. What’s left, then, are the two contracts that Rockets GM Daryl Morey structured in such a way that they would not be matched by the New York Knicks and Chicago Bulls, respectively. Unfortunately, that same structure is what now makes them difficult to trade, as there is a $15 million balloon payment due to each player next season. Asik is worth that price tag if he’s healthy, but Jeremy Lin clearly is not. Several league executives have confided to Basketball Insiders that Asik’s contract is not nearly as concerning as his trade demand and subsequent absence from the lineup.

For Houston to land Rondo, then, the Celtics would have to be interested in a package that centered around Asik, which is hardly a given. While a strong argument can be made that the Rockets could finally rise to contender status with Rondo sharing a backcourt with Harden, it’s not as easy to see why the Celtics would make such a deal. If Rondo shows he is back to All-Star form before the trade deadline and the Celtics put him on the market, they would almost certainly be offered a much sweeter deal.

Earlier this season it looked like the Toronto Raptors were prepared to liquidate their veteran backcourt and spend the season developing young talent while shooting for the top of what promises to be a deep 2014 NBA Draft. Rudy Gay was the first piece to go, but something happened in the wake of his departure that abruptly changed the whole tanking-for-draft-position plan.

The Raptors started to win — a lot!

When the Raptors pulled the trigger on the trade that sent Gay to Sacramento for a package including Patrick Patterson, Chuck Hayes and Greivis Vasquez, the Raptors were 7-13 on the season and going nowhere fast. The team was working the phones trying to move both Kyle Lowry and DeMar DeRozan in order to land future assets and, they hoped, a high pick in this summer’s draft. The asking price was high, too high for at least one of the teams poised to land a very high pick, but the plan was to blow it up and start over.

Since the trade, the Raptors have gone 14-5 and climbed out of the Eastern Conference basement and into the upper bracket of the playoff picture.

Despite the team’s success, head coach Dwane Casey insists his team is still a work in progress, just like he said at the start of the season.

“It hasn’t changed and I haven’t changed,” Casey told Toronto’s ProBballReport recently. “We won and moved up to whatever it is, but it hasn’t changed. Winning is gravy right now. We are ahead of schedule with that, but we are still not a finished product and we have a lot to do. Those 2 still have a lot of growing to do and I am excited about their future. I think they have a lot to work with. You saw (Jonas Valanciunas) with his length and size and his ability to make free throws at the end of games and you can’t teach that, but there are a lot of things he has to learn – a lot of things Terrence (Ross) has to learn in this league.”

After a two-game skid derailed the Raptors’ hot streak earlier in the week, Casey cautioned against getting to far ahead of where the team really is at this point.

“In this league and for where we are – a slide – what’s a slide?” Casey said. “We lose two games and everybody gets all up in it. We are not going to go 42-0 and I have said it all along, we are still growing. We are building and for everybody to expect we are going to run this table the rest of the way, they are kidding themselves. I have said that, I mean that, we are still growing.

“We have got to continue to grow and learn. The way we played the first quarter was not growing and learning and we have to learn from that. Young players have to learn. You know young guys are struggling right now. So we have to keep them going, so I don’t see it as a slide. We kicked a couple of games. I didn’t like the way we played the Charlotte game. The Lakers game, we didn’t get defense in the game. So, I don’t call it a slide.”

It’s easy to get caught up in the highs and lows of an NBA season, such as the lows that brought about rumors of Casey’s firing and the highs that made him the Eastern Conference Coach of the Month for December. The real take-away message when looking at the Raptors over the first half of the 2013-14 NBA season is that they are definitely moving in the right direction.

Small wonder that Lowry and DeRozan are now said to be off the market altogether.

In case you missed my last NBA chat, which took place on Tuesday, January 21 find it by linking here! You can also go ahead and submit a question for this week’s chat, which you can find here! I make an effort to answer every non-repeat question, and early questions are virtually guaranteed to be answered, so drop yours in now!