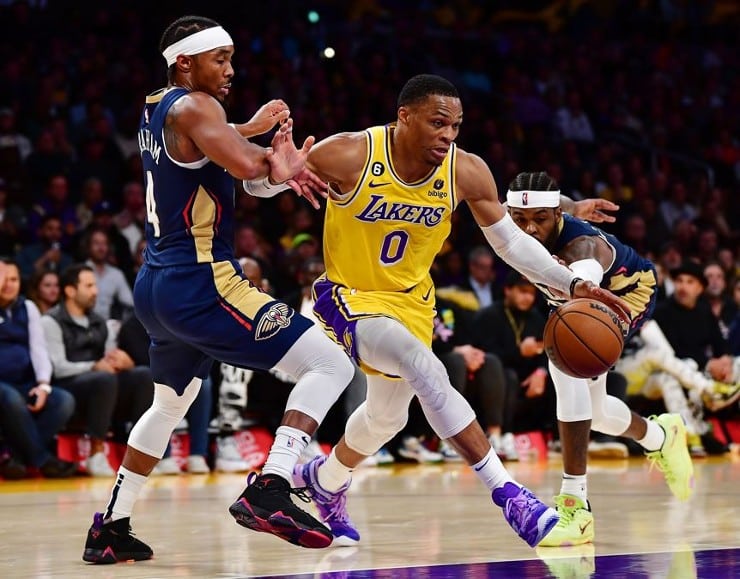 Los Angeles Lakers guard Russell Westbrook had a disappointing start offensively to the 2022-23 season, shooting 28.9% from the field and 8.3% from beyond the arc. The guard also suffered a hamstring injury, which led to him missing a game.

Though, since returning from his injury, Westbrook has come off the bench for the Lakers. So far, the change has been beneficial. While his stats have slightly improved, the more important thing is that L.A. is now winning.

Some NBA betting sites show the Lakers with the 16th-highest odds to win the championship in 2023. Until L.A. starts winning more games, a few sportsbooks will continue to drop their odds of qualifying for the playoffs.

Russell Westbrook’s stats off the bench so far

Through seven games this season, based on playing at least 70 minutes, Russell Westbrook is the only Lakers player with a positive point differential of +6.

Over the last 3 games, the guard’s point differential is +22. Fellow teammate Anthony Davis is the only player with a higher figure, at +24. Westbrook’s 2.6 net rating leads the team for players playing a minimum of 20 minutes per game.

Lonnie Walker IV led the Lakers in scoring against New Orleans with 28 points in 40 minutes. LeBron James and Davis also ended their performances with 20 points. Matt Ryan finished his night with 11 points off 7-of-20 shooting.

Russell Westbrook is 6th among Guards in DEF WS right behind Defensive Specialist Jrue Holiday. He is 11th in Defensive WS among all players. Per https://t.co/iucF1eKCc5 stats. Just adding to the graphic by @TheMambaBrodie about DEFRTG also in the 3rd graphic. Good lookin fam✊🏿 pic.twitter.com/EJWBxWsxhJ

After Austin Reaves made a crosscourt pass to Ryan at the end of the fourth quarter, the 2020 undrafted forward sank a 3-pointer in front of the Lakers’ bench to force overtime.

More importantly, with Russell Westbrook now coming off the bench, the Lakers are starting to play more like a team. While they’re still below .500 with a 2-5 record, back-to-back wins is a step in the right direction.

On Friday, the Lakers play at home against the Utah Jazz at 10:30 p.m. ET. This will be another test for Los Angeles, considering the Jazz are currently 6-2.