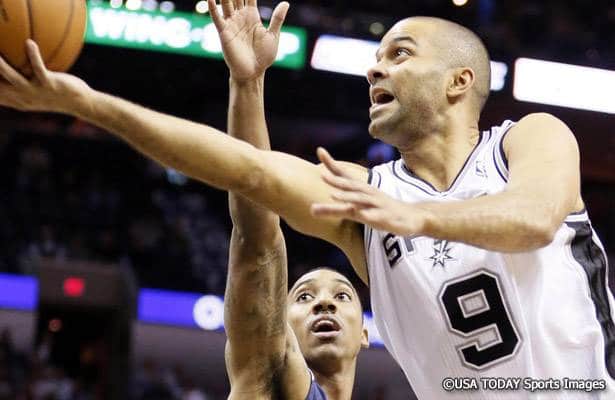 Ask the average NBA fan what they think about the San Antonio Spurs and you are far too likely to hear that person talk about the age of the team and how boring they are to watch. After all, those have been the talking points regarding the Spurs for the past four or five seasons despite the fact that San Antonio has consistently been at or near the top of the Western Conference, age and all. This season has been no different, and for those who don’t watch the Spurs on a regular basis, there are some reasons to start preparing yourselves for another title shot by Tim Duncan, Tony Parker and the boys in black.

First of all, the Spurs currently hold the West’s top record despite the fact that those “older” players are hardly breaking a sweat. Better than anyone in the league, Spurs head coach Gregg Popovich knows how to pace his players and spare their aging bodies by giving them plenty of rest. If resting someone means the team is more likely to lose a game, so be it. The Spurs are not concerned about regular season records, division titles or individual awards. The only thing that matters is being healthy come playoff time and competing for another championship.

The only Spur averaging more than 30 minutes per game is franchise player Tony Parker, and even he is only playing 31.2 minutes per game. By comparison, Los Angeles Clippers starting point guard Chris Paul is averaging 34.6 minutes per game, Cleveland Cavaliers floor leader Kyrie Irving plays 35 minutes per game, Portland Trail Blazers second-year man Damian Lillard goes 36.2 minutes per game and Golden State Warriors’ sharpshooter Steph Curry logs 37.7 minutes a night. That’s a great example of why the Spurs have been able to keep their core group together and relatively healthy for a nearly a decade and a half.

Tim Duncan will turn 38 in April, and this season he is logging just 29.1 minutes per game, close to a career-low for the All-Star power forward who has spent most of his career playing between 34 and 40 minutes per game. Likewise, perennial sixth-man candidate Manu Ginobili is playing more of a cameo role some nights and logging just 24.1 minutes per game, enabling him to be in when the team needs him the most and not wear out his knees early in games or early in the season.

No one manages minutes as well as Popovich.

The next major factor for the Spurs is, of course, management. Without the personnel to step in and play significant minutes the older players on the team would have no choice but to shoulder more of the burden. Marco Belinelli, the team’s big offseason addition, has been great this season and is shooting better than 50 percent from the field as well as from outside the three-point arch while averaging 10.8 points per game.

Finally, internal development continues to be a huge key for the Spurs. As one of the league’s smallest markets, the Spurs are not a team that can afford to just go out and spend big money in free agency to keep the team winning. Their sustained success as a small market team that stays in the championship chase every year has become a model for teams across the NBA as salary cap rules tighten under the new collective bargaining agreement. Drafting and developing players like Kawhi Leonard and Tiago Splitter in recent years has enabled Duncan and Ginobili, in particular, to play fewer minutes without sacrificing team success. Danny Green has certainly played the best ball of his career since joining the Spurs and there are some interesting young players doing their time with the D-League’s Austin Toros just waiting for a shot at a role in San Antonio.

There’s a very good reason why NBA teams across the country are pilfering talent from San Antonio, both to fill their front office and to run their teams on the sidelines. The Spurs have a track record of excellence, one that comes without a ridiculous price tag and is based on good old fashioned talent evaluation and development. They have a system that works, and they run it relentlessly, stifling the more expensive and flashier teams in the process.

Go ahead and call the Spurs old and boring, but don’t be surprised if come June you are also calling them champions.