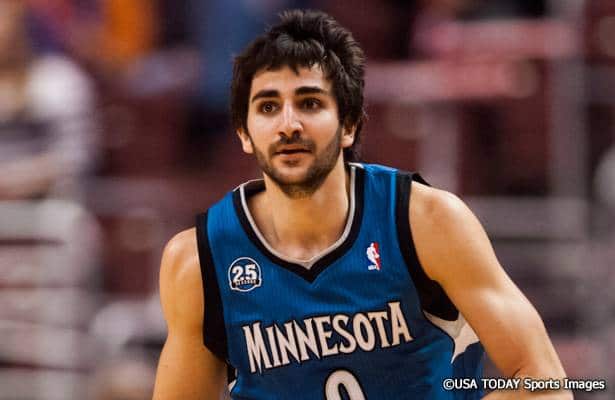 The Minnesota Timberwolves are a curious team. With a solid roster and proven head coach, the Wolves on paper look like a team that should be competing for a playoff seed, but instead are currently ranked 11th in the competitive Western Conference. Here are six things you need to know about this team.

#1 – Ricky Rubio is not having fun, and it is affecting his play.

Ricky Rubio played his first game for the Timberwolves on December 26, 2011 in front of the first sellout crowd at the Target Center since the 2007-08 season. Rubio’s ability to make pinpoint passes made him a crowd favorite, but that spark has diminished with his overall confidence.

Recently Rubio has watched the end of close games on the bench in favor of J.J. Barea. This does nothing to improve Rubio’s confidence, but head coach Rick Adelman knows his team needs wins now. Unfortunately, this team is unlikely to win consistently if its young point guard is not playing well enough to get off the bench in the fourth quarter. Rubio doesn’t need to be a No. 1 scoring option, but he does need to be a threat to keep defenses honest. The first step to achieving this is becoming a consistent shooter.

#2 – Kevin Love and Nikola Pekovic are not rim protectors.

Kevin Love and Nikola Pekovic have no trouble scoring the ball. Love can stretch the ball well past the three point line, and Pekovic has an arsenal of moves with which he can score. The problem with this frontcourt tandem is that it fails to prevent opponents from scoring at the rim. To date, Minnesota allows opponents to shoot 65.2 percent within five feet of the rim, ranking last in the league, barely edging out the Sacramento Kings for that distinction. Additionally, the Timberwolves block the fewest shots per game in the league at 3.3. While rim protection is only one aspect of team defense, it is a significant one. Teams like the Houston Rockets, headed by stats guru Daryl Morey, are increasingly using advanced statistics to identify high percentage shots for its players. Thus, teams like Houston are taking more shots from three point range and at the rim, as they are statistically two of the most efficient shots available. This problem is not going away any time soon either, as the Wolves don’t have any other bigs that can offer significant rim protection.

Former Minnesota GM David Kahn refused to give Kevin Love a five-year extension in early 2012, which Love was reportedly unhappy about. The plan was to lock up Rubio using the one time franchise designation on him down the road.

Rubio has failed to set the NBA on fire as Minnesota had predicted, while Love has become one of the best big men in the league and now he has a player option to hit free agency in July of 2015. Love has not said publicly that he wants to leave Minnesota, but the team is facing missing the playoffs for the 10th season in a row. Love will consider joining another team if the Wolves cannot break this drought and compete at a high level. Fortunately for the Wolves, Flip Saunders is not David Kahn, and the word from the team is that Love and Saunders have a good relationship.

With this in mind, Minnesota needs to gauge what sort of offers they can get for Love now. Turning a blind eye and daring superstar free agents to take less money with another team is no longer a safe bet. For example, look at Dwight Howard’s decision last summer to turn down significant money, leaving the Lakers to play with James Harden and the Rockets. The Lakers were left with nothing to show for their gamble on Howard, and are now rebuilding. Minnesota can still turn its fortunes around, as winning cures all, but it cannot bury its head in the sand if the losing continues and it becomes clear that Love’s days in Minnesota are numbered.

»In Related: Is It Time for Minnesota to Trade Kevin Love?

#4– They can still make the playoffs.

For all the talk about Minnesota’s failure to meet expectations, there is still roughly half a season left to play, and Minnesota is only three games back from the eighth seed. The teams currently ahead of the Wolves are all dealing with their own issues, and a hot streak could land Minnesota right back into the playoff discussion. Denver has been inconsistent while adjusting to first-year head coach Brian Shaw, Memphis has struggled to lock down opponents with its “grit and grind” defense after removing Lionel Hollins, and the Mavericks have struggled to rebound the ball all season. However, reigning defensive player of the year Marc Gasol recently returned from injury, and Memphis has won eight of its last 10 game. Also, Denver has shifted back to an up-tempo style of play, which could certainly lead to improved play, though the recent report that Danilo Gallinari will miss the rest of the season to an unexpected ACL surgery is a significant blow to the Nuggets.

If the Wolves can shore up a few fundamental problems quickly, they should find themselves in the playoff hunt sooner rather than later.

#5 – Winning close games has been problematic.

After losing to the Raptors on January 17th, the Wolves were 0-12 this season in games decided by five points or less. The Wolves finally broke through last week against the Warriors, however, winning a tight game against Golden State. Minnesota outscored the Warriors by eight in the fourthquarter and won 121-120. Though the win is encouraging, it only places Minnesota at 1-12 in games decided by five points or less. Consider this, had Minnesota won just six of these 13 games (which would still not be a great record in close game situations), the team would be 29-17, and the sixth seed in the West. Part of the problem revolves around Rubio and his shaky shooting.

In Minnesota’s loss to the Suns on January 8th, Rubio had the ball with roughly 30 seconds left in the game leading by one, and turned the ball over. On tape you can see that Goran Dragic goes under a screen set by Pekovic, knowing that Rubio is no threat to use the screen to hit a long jumper the way that a Chris Paul or Damian Lillard could. This allows Dragic to play Rubio tight as he drives the lane, and forces the turnover, which sets up Gerald Green’s game-winning shot.

This is not to say that Rubio is the only problem in late-game situations. Sometimes a team is just unlucky, as the Wolves were when the referees failed to call a foul on Shawn Marion as he clearly hit Love on a jumpshot that would have tied the game against the Mavericks.

The Wolves need to build off of their win against Golden State and find a way to consistently execute late in games, otherwise there is little hope of making the playoffs.

For all the negative attention Rubio is receiving, fans and the media seem to forget that the pass-first point guard is only 23 years old. It doesn’t help Rubio that the NBA is littered with young point guards that are extremely productive after only a few years in the league, such as Damian Lillard, Eric Bledsoe and John Wall. There is still time for Rubio to develop from a solid defender, and make the leap from dynamic passer to all-around star. The problem for Rubio is that this team is designed to compete in the playoffs now and with Love’s player option just a year away, the pressure is on Rubio to ramp up his production and get Minnesota back on track.

Kevin Love is undoubtedly Minnesota’s best player, but there is not much else he can do on his own to lift this team up. In a league saturated with talented point guards, the Wolves aren’t going to win at a high level until Rubio becomes a more complete player.