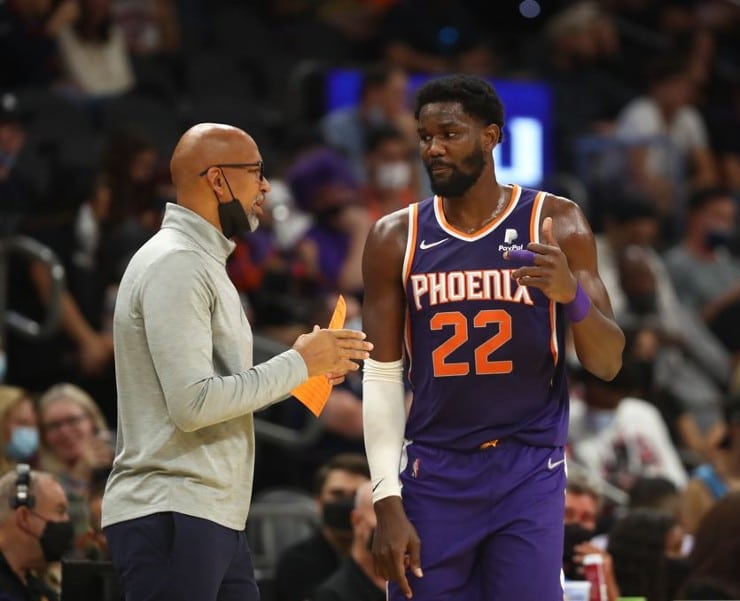 Phoenix Suns G.M. James Jones was interviewed by the Arizona Republic on Saturday. The NBA executive was asked questions related to 6’11” center Deandre Ayton and his offseason.

When asked if relations are now positive between the front office and Ayton, Jones replied, “Yeah, we’re good.” In mid-July, the Suns matched the Pacers’ offer sheet on a four-year, $133 million deal for the fourth-year player.

CHANGE IS INEVITABLE.. GROWTH IS OPTIONAL.!! I BELIEVE ITS TIME FOR A CHANGE… I WANNA CONTINUE GROWING.!

Of course, Jones isn’t bothered by the tweet. “It’s noise, it’s noise,” replied the Suns G.M. “It’s noise, I don’t read into people’s actions. I don’t read to their actions, their words. Like there’s so much noise. So much lack of context that goes with conversations.”

Suns G.M. James Jones on Deandre Ayton: “The contract stuff is behind us”

Moreover, Jones is glad the drama is over between Ayton and the front office. The Suns have to focus on the upcoming season. In the second round of the 2022 NBA Playoffs, the Dallas Mavericks defeated the Suns in seven games. They blew another two-game series lead in the postseason.

“You get into this rabbit hole of trying to decipher and filter out the noise and figure out what’s real and what’s true and what context and what setting,” continued Jones. “It’s just a fruitless exercise. To me, it’s all noise.”

“And when you can eliminate the noise, you get back down to what we’re doing. Playing basketball. Competing. Most of that stuff becomes irrelevant. I don’t pay attention to it, to be honest with you.”

Additionally, the interviewer then asked Jones if peace will exist for other players within the organization now that Ayton’s contract situation is over. “Yeah, that part is behind us,” the Suns G.M. responded. “The contract stuff is behind us, and our focus now is how do we help him improve and continue to improve.”

“We have ideas and plans to do that. It’s on me and the staff to figure out how to help him in conjunction with our other guys. Continue to realize their capacity. Their potential. He’s good, and he’s in great shape.”

“He’s really been in the gym working on what I’d say are ‘second-level things’ and I know he’s excited to prove that he’s better than he was last year.”