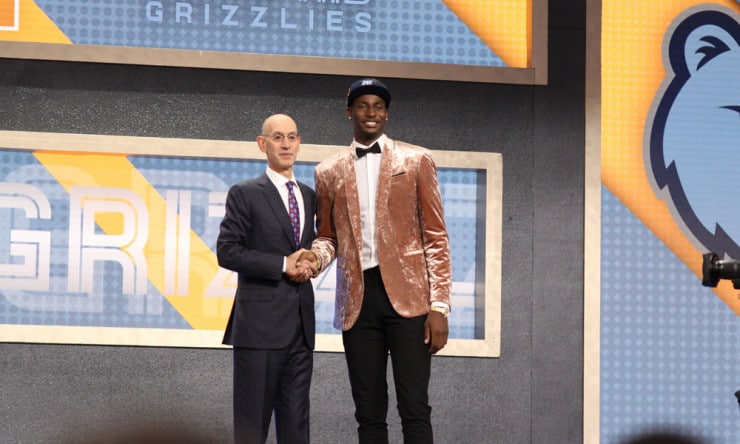 With the No. 4 pick in the draft, the Memphis Grizzlies select Power Forward/Center Jaren Jackson Jr. out of Michigan State.

Jackson measures in at 6-foot-11, 236 pounds. In a league that values three-point shooting and versatility now more than ever, players like Jackson are very rare to come by. The Michigan State alum was widely regarded as one of the safer picks in this year’s draft given that his skill set fits the modern NBA like a glove. Jackson proved to have a reliable three-point shot in the collegiate level, as he shot 39.6 percent from three, while also proving to be a defensive presence in the post, as he averaged 3.0 blocks a game.

What makes Jackson all the more appealing as a young prospect is his all-around IQ as a player. Jacksons’ ambidextrous abilities should serve him very well in the NBA. Jackson can finish with both of his hands in the post and he can block shots with both hands, which should make him an all-around menace on both ends of the floor. Jackson has also shown his feel for the game, as he’s shown to be a good cutter and can run the floor well for a big. The all-around skills that he brings to the table have drawn comparisons to premier bigs in the league such as Al Horford and Myles Turner.

Jackson should also have a high learning curve once he enters the NBA. Jackson will come into the league as one of its youngest players. He does need to add some mass, and his release isn’t very pretty, but luckily he’s going to a team that should provide a good mentor for him with all-star center Marc Gasol.

Rumors were swirling before the draft that Memphis was dangling the fourth overall pick along with Chandler Parsons, but ultimately stayed put. They had good reason to keep the pick since that they now have a prospect like Jackson on the team. No matter where the Grizzlies go from here, their future is in good hands with Jackson onboard.