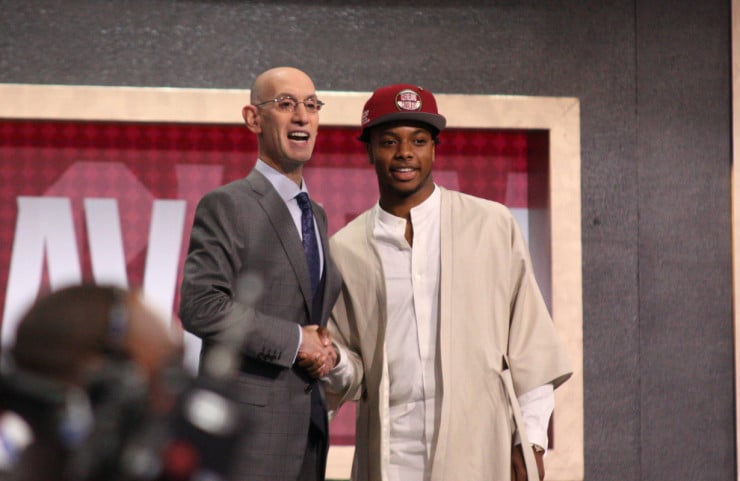 With the fifth pick in the NBA Draft, the Cleveland Cavaliers selected Darius Garland, a freshman guard out of Vanderbilt.

Due to an unfortunate knee injury suffered on Nov. 27 vs. Kent State, the upstart Garland played just five games in college with the Commodores. However, there are some people that believe, had he completed a full season, he might’ve been right up there with Ja Morant in terms of the best point guard in the 2019 draft class.

Make no mistake about it: Garland’s talent speaks for itself. He loves to play off the bounce and pull up from deep, a distance from which where he is a dangerous threat (47.8 percent in those five contests).

Playmaking for others is an area where Garland can use work though. Plus, being 6-foot-2 won’t make it easier on him when it comes to defending bigger guards — but he certainly has game. There wouldn’t have been offers from Duke, Kentucky, Indiana and Kansas if that wasn’t true. Garland just wanted to stay close to home as he went to Brentwood High School in Nashville, Tennessee.

As far as NBA comparisons go, there are some who see him as a Damian Lillard-style combo guard. Jeff Teague is another name that is popular when contrasting games. All in all, somewhere in the middle of those two might be the sweet spot in evaluating Garland.

If the Cavaliers plan on keeping Garland, he and Collin Sexton could mirror what the Portland Trail Blazers have with Lillard and CJ McCollum — a backcourt that plays off each other and can score the ball. While the defensive side of it could certainly be a difficult weakness to overcome, this team wanted to take the best player available.

Cleveland got its wish.