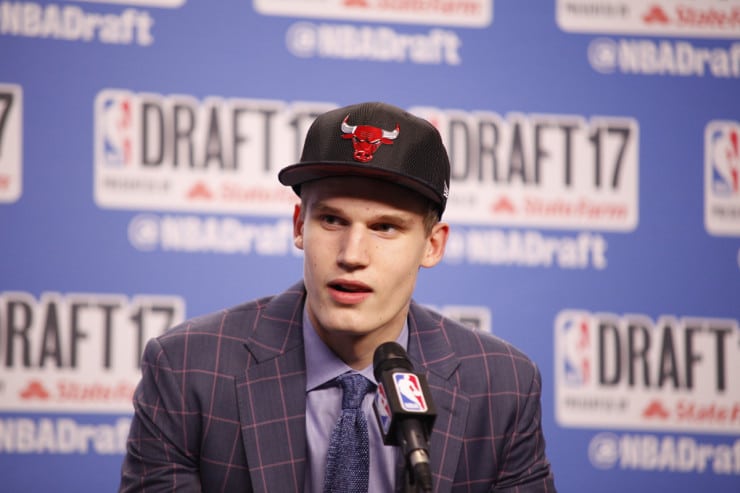 As part of the Jimmy Butler trade to the Minnesota Timberwolves, the Chicago Bulls drafted Arizona forward Lauri Markkanen, a three-point shooting big man that has been compared to similar stretch bigs in the NBA like Channing Frye and Ryan Anderson.

In this draft, the Bulls really needed to do two things: get younger, and get more athletic. They did that through their trade with the Timberwolves, adding the league’s best dunker in Zach LaVine as well as Kris Dunn, both of whom are in their early 20s. Adding Markkanen, a freshman, will lower the average age of the team even further.

He is not particularly athletic, but that doesn’t mean he fails to fit a need for Chicago. The Bulls were one of the league’s worst three-point shooting teams last year. They were 24th in three-point percentage and 28th in three-pointers made, so adding a player that hit 42.3 percent of his threes at Arizona can do nothing but help.

The thing about Markkanen, the top-rated international player in this draft out of Finland, is that he’s a legitimate 7’0, and as such he did average 7.0 rebounds a game at Arizona last year. In that regard, he does help diversify his new team’s frontcourt rotation. He’s a pick-and-roll pro, which should be a huge asset for the Bulls, who finally seem to be amassing the types of players that made Chicago head coach Fred Hoiberg successful at Iowa State.

It’s not all good, though. Markkanen is not destined for superstardom anymore than Frye or Anderson have been. Defensively, he’s a liability and is going to get killed by the quick, strong scorers in the NBA. He also doesn’t really create his own offense, which could limit him to that pick-and-pop game and hoping that LaVine, Rajon Rondo, or Dwyane Wade can break down offenses enough to get him some open looks.

The pick is a logical, if uninspired one, by the Bulls. As part of the Butler trade, one would assume this pick would be more of a home run swing. Markkanen isn’t that, but he seems like a safe enough base-hit single.