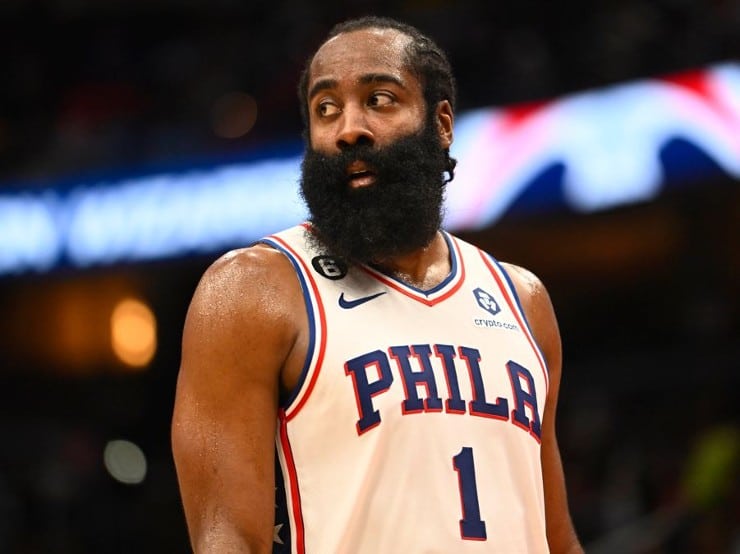 Philadelphia 76ers guard James Harden is expected to return in a couple of weeks, according to the team’s medical staff. In the Sixers’ 121-111 loss to the Washington Wizards on Nov. 2, the 10-time All-Star sustained a tendon strain in his right foot.

Of course, the guard is no longer wearing the boot. In addition to participating in shooting drills with the team, Harden has trained on the anti-gravity treadmill every other workout as well.

According to notable NBA betting sites, the 76ers have the 11th-best odds to win the championship in 2023. Some sportsbooks show higher odds for the Brooklyn Nets and Cleveland Cavaliers.

The 33-year-old feels his injury is progressing day by day. That’s most important. “I feel good. I’m on pace, starting to slowly ramp it up a little bit,” said the 76ers guard after Thursday’s practice.

“We’ve got a plan, a script that we’re trying to stick to. All in all, I feel good.”

76ers guard James Harden will likely return in a couple of weeks, right foot is healing within scheduled timetable

Philadelphia is currently on a three-game skid. But fans are wondering if the team’s passing game is improved. Is the 76ers’ ball movement better without Harden on the court?

“I don’t know if it is or isn’t,” replied coach Doc Rivers when asked on Wednesday. “When you watch it, the other night it wasn’t great either way. We miss his passing.”

Well, one thing is for certain: the 76ers’ offense is much worse without Harden. Fourteen games into the 2022-23 season, the 76ers rank 29th in scoring, averaging 108.5 points per game. Their offensive efficiency rating also ranks 18th overall (1.085).

How much better is the 76ers’ ball movement without James Harden?

“I don’t know if it is or isn’t,” said coach Doc Rivers said Wednesday. “When you watch it, the other night it wasn’t great either way. We miss his passing."https://t.co/tQBWmEpcf5

Nonetheless, while Harden was averaging 1.1 steals prior to his injury, perhaps the Sixers are better off without the 14-year veteran defensively. The evidence speaks for itself.

Philadelphia ranks third in the NBA in opponent points, allowing 106.5 points per game. The Sixers trail only the Dallas Mavericks (106.3) and Milwaukee Bucks (106.4) in this metric.

Not to mention, the 76ers’ defensive efficiency rating is the fourth-best in the league (1.065). If James Harden can play as great on defense as he has for mid-range jumpers, Philadelphia will become the top threat to the Boston Celtics in the conference.

If all goes right, the guard should return soon.