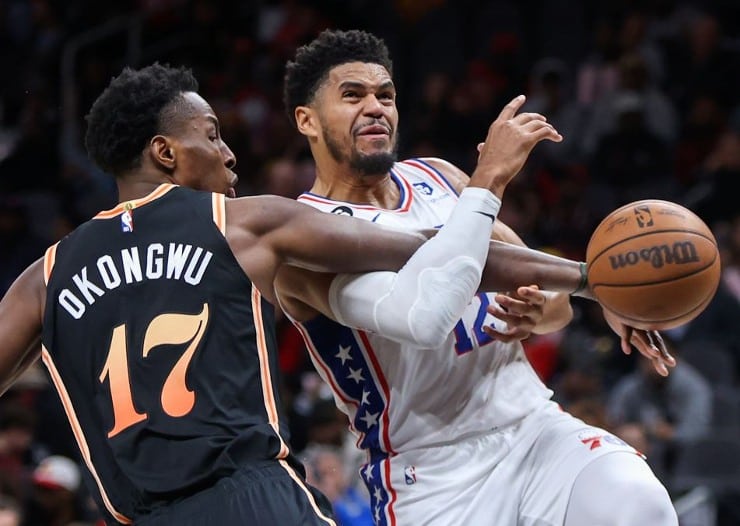 Philadelphia 76ers forward Tobias Harris is once again at the forefront of interesting NBA trade rumors, but the 12-year veteran is relaxed, considering the wing knows he can play at a high level on any team.

“The trade rumors, I’ve been in trade rumors, to be honest, ever since I’ve came into the NBA so it’s nothing new to me and it’s something that, honestly, doesn’t affect me because I know I’ll be fine wherever I am,” said Harris.

According to some NBA betting sites, the 76ers possess the ninth-best odds to win the championship in 2023. Check out which sportsbooks are giving the Boston Celtics and Milwaukee Bucks higher odds in the Eastern Conference.

BREAKING: the Los Angeles Lakers and New York Knicks have reached out to the Philadelphia 76ers regarding a Tobias Harris trade

Lakers and Knicks both desperately looking for shooting pic.twitter.com/JlWJOoNhsM

“I don’t really stress on that,” added Harris. The Sixers forward at one point served as the team’s No. 2 option. Now, he helps contribute less offensively as Philadelphia’s fourth option.

While he’s averaging a career-high 1.6 steals, coach Doc Rivers is using Harris in fewer plays at the moment. Indeed, the wing’s usage percentage is a career-low 18.7%.

“It don’t frustrate me,” Harris said on trade rumors. “I understand the business. And I understand the game and I’m a person that lets things happen the way they’re gonna happen.

I know I’ll be fine either way, and all I do is go out and just handle what I can control every day. All the other stuff is out of my control.”

Here are 3 reasons why trading Tobias Harris would be a foolish move for the Philadelphia 76ers. https://t.co/wxDWRZQlLP

The 76ers forward has not yet recorded a double-double this season. Last season, Harris logged nine double-doubles and one triple-double in 73 starts. The Tennessee product averaged 17.2 points, 6.8 boards, and 3.5 assists.

In his first 15 appearances of the 2021-22 season, the veteran posted four double-doubles.

Harris’ 14.7-point average is his lowest since the 2015-16 season. Since the wing has been traded four times in his NBA playing career, quite a few 76ers fans are wondering if this will be his last season with Philly.

For a No. 4 option, his value is slipping. If 76ers G.M. Elton Brand can acquire a pick or two for a Harris trade, the front office will approve a move. When healthy, Joel Embiid, James Harden, and Tyrese Maxey are all more reliable players.