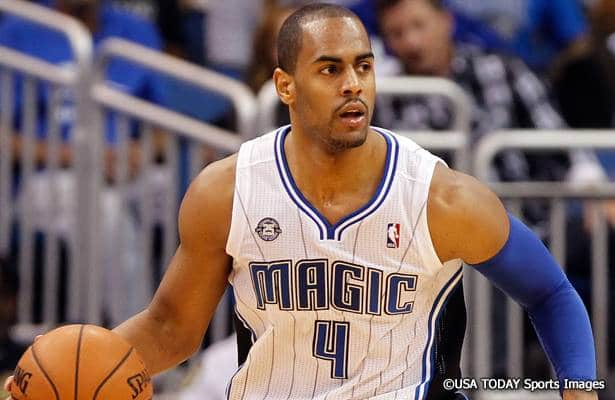 It’s no surprise to Arron Afflalo’s Orlando Magic teammates that he’s having the best season of his seven-year NBA career at 28 years old. Over the offseason, Magic players were predicting that Afflalo would have a breakout season.

Over the summer, these predictions were written off as teammates overreacting to workouts and overrating their peer. After all, Afflalo had struggled in the 2012-13 season when thrust into the role of go-to scorer and number one option. Before last season, he talked about becoming one of the top shooting guards in the league, but he quickly realized that being an elite player and top option is harder than it looks. He averaged a career-high 16.5 points, 3.7 rebounds and 3.2 assists, but it wasn’t the huge leap that everyone expected from him. He shot just 43.9 percent from the field and 30 percent from three-point range. At times, his shot selection and decision-making left a lot to be desired.

Now, looking back, Afflalo is the first to admit that he wasn’t ready for that kind of increased role. However, this season, he has been spectacular. He’s averaging 20.8 points, 4.4 rebounds and 3.9 assists. His efficiency rating is a career-high 18.48 and he’s clearly the best player on the court for Orlando.

“I learned patience,” Afflalo told Basketball Insiders. “I really learned patience. Sometimes when you’re given the ball, you start [forcing it]. And you want to succeed so bad, especially since that was my first opportunity – at the NBA level – being asked to [be the go-to guy]. So over the summertime, I just learned to read the game a little bit better and pick my spots a little bit better. The key word for me is efficiency. It’s not just about having the ball and getting a lot of shots, it’s about taking and making the right shots, making the right plays. That’s why I’ve been given that responsibility. If I have to take 10 or 11 shots, I’m going to make sure that they’re great shots for me. If there are games where I’m going to get 19 or 20 shots and have an explosive game, I’ll take that too, but for me the big keys have been patience and efficiency.”

This is the player that Magic general manager Rob Hennigan hoped he was getting when he orchestrated the four-team trade that brought Afflalo, Nikola Vucevic, Maurice Harkless and picks to Orlando in exchange for Dwight Howard and fillers.

Jason Maxiell, who played with Afflalo on the Detroit Pistons and now with the Magic, is thrilled to see his longtime friend succeed. For years, he has called Afflalo “Baby Kobe” since the shooting guard grew up a huge Kobe Bryant fan in Los Angeles and tried to add Bryant’s moves to his own repertoire. Now, Afflalo is finally taking over games and dominating like his L.A. idol, and the nickname makes more sense.

“I’ve known Arron since he was drafted in Detroit, we played together for a few years there, and he’s been the same guy ever since,” Maxiell said. “His work ethic is intense – he comes in early and he leaves late. He’s not very verbal, but you can see on the court how hard he plays. That and his mentality influences the younger guys and will help them grow over the years. His game has evolved tremendously. I’ve watched him go from a young player to the player he is now. I’ve always called him ‘Baby Kobe’ because his role model is Kobe. Every time he’s on the court, every move and every little thing he does is all about Kobe. It’s great to be able to watch him [succeed] and see him grow.”

Growing up, when Afflalo watched Bryant or Michael Jordan put up huge numbers and annihilate their opponent, they made it look so easy. Being a superstar and a number one option didn’t seem difficult at all for those guys. Now that he understands what it takes to be in that position, Afflalo has a great deal of respect for those legends and their consistency.

“I do [have more respect for those players now],” Afflalo said of the superstars who consistently put up big numbers. “More so for what they do in the offseason, because I know all of the work that I had to do on my body so that I could get to the point where I could handle that, where I was strong enough and in shape enough to be able to handle that. I’m more impressed with how long they were able to physically stay in shape and the fact that they could come out every single night and perform at that high level. People pay to come see them play at that level; they don’t just want to watch the Lakers win, they want to see Kobe Bryant play well or they want to see Michael Jordan play well. It’s impressive that those guys were able to come out every night and perform at that level. That’s what I’m shooting for.”

»In Related: Six Things to Know About the Orlando Magic

So far, Afflalo is delivering. He’s even getting some All-Star buzz. While it’s clear that Kyrie Irving and Dwyane Wade will start in the Eastern Conference’s backcourt due to fan voting, it’s possible that Afflalo is selected as a reserve by the NBA’s coaches. He’s competing with players like John Wall (who seems like a lock) and DeMar DeRozan among others. With stars like Derrick Rose and Rajon Rondo injured, Afflalo certainly has a shot at making the East All-Star team.

“When I get asked that question, I do respect the fact that when you play well individually, it has to be a reflection of your team and if we continue to win and continue to get better, then I would appreciate it,” Afflalo said of being an All-Star. “I know I’m not going to get the fan vote, but from the coach’s perspective it’s definitely something that I would appreciate.”

It’s common to hear Afflalo talk up his teammates and he’d much rather discuss the Magic’s success than his own. The veteran is proud of the progress that Orlando’s young players have made this season.

“We’re trusting each other and the game is being played the right way,” Afflalo said of the Magic this season. “Everybody is being aggressive, but being aggressive with the right intent. When we all do that and play for each other, we can compete with any team on a nightly basis.”

Afflalo has shown tremendous growth this season, but he believes this wouldn’t have been possible without the previous six years. He learned so much during his time with the Detroit Pistons and Denver Nuggets, as he was asked to do more and more with those teams.

“Every year has been different,” Afflalo said. “It’s been different. I’ve never been one to stay the same. When I came in as a rookie, that Pistons team that I came in to was a veteran team that had been to a lot of Conference Finals. When you’re a rookie, you do whatever you can to get on the court and for me, that was playing defense. Then, when I got to Denver, that was kind of my first opportunity to be a two-way player. But even my first years in Denver, they had Carmelo [Anthony], Chauncey [Billups], Nene, Kenyon [Martin], J.R. [Smith], all of these guys who could score the ball so I still played that defensive role. Then, I just continued to evolve. I had some growing pains last year trying to be that [go-to] guy and I learned a lot. That experience was very, very valuable. I took all that I learned and got my body into shape and got my mind geared for this year, just to make sure that I was well prepared.”

One thing that Afflalo is still getting used to is double-teams. He rarely experienced that earlier in his career and now teams are throwing the kitchen sink at him as they try to slow him down.

“I’ve been seeing those the past few weeks now,” Afflalo said with a smile when asked about double teams. “But my teammates have been great, they’ve been hitting shots and they’ve still set screens for me and things of that nature. For me, if that’s going to be the case, I’ve just got to pass the ball and hope it comes back around.”

When asked if Afflalo saw this breakout campaign coming, he pauses and then grins.

“If you ask any guy who evolves and gets into the elite status, they’ve had a belief from day one,” Afflalo said with a smirk. “It’s not like they didn’t believe in themselves and then suddenly [they started believing]. I’ve always believed in myself, even when I was first coming into the NBA and for the five or six years when it was unclear to so many. And it may still be unclear to some people now. I mean, I’m only 30 games into this season and some guys have done this year after year after year. But that’s where I want to be. I want to continue to get better and do this year after year.”