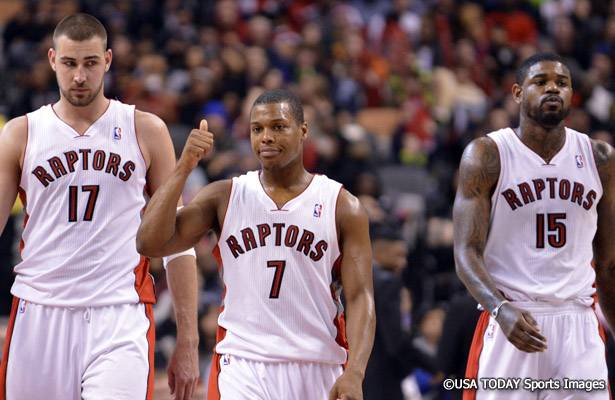 Quiet as kept, the Toronto Raptors (19-18) are one of the hottest teams in the league posting a 10-4 record since December 20.

Toronto currently sits atop the Atlantic Division standings and if the playoffs were to begin today, the team would be the fourth seed in the Eastern Conference – marking their first postseason appearance since 2008. But despite the team’s recent success, the franchise remains at a pivotal crossroads as we peek into the future direction of the organization.

The fate of the franchise is now in the hands of newly crowned president and general manager Masai Ujiri.

The veteran executive is no stranger to success as the leading man in the front office, winning the 2012-13 Executive of the Year award while with the Denver Nuggets. The Raptors are banking on his pedigree to return the franchise back into the playoff conversation and eventually the title discussion.

Ujiri, like many executives in a new situation, has been extremely busy since coming to Toronto. Ujiri’s first roster related move involved shipping former No. 1 overall pick Andrea Bargnani to the New York Knicks for forward Steve Novak and a plethora of future second-round draft picks (Marcus Camby and Quentin Richardson were released shortly after the deal).

The next major move involved trading high scoring forward Rudy Gay, who was headed to unrestricted free agency next summer, to the Sacramento Kings on December 9. The deal netted Toronto productive role players in Greivis Vasquez, John Salmons, Chuck Hayes and Patrick Patterson. While not likely to win many popularity contests, the group has been a strong contributing factor in the team’s recent rise in the standings.

But here is the fork in the road for Ujiri to tackle with just over 30 days remaining until the trade deadline.

Will the team stay the course and ride the wave of this recent success or will Ujiri decide to put his own stamp on the roster and continue to seek additional deals?

The first option is extremely tempting to see how well the team can play in the second half of the season as the chemistry improves. But it is also a very risky road.

For starters, head coach Dwane Casey is in the final year of his contract and there is uncertainty on whether he is truly the guy the franchise is willing to entrust long-term. Also note, new general managers typically love bringing in their own coaches to extend their vision. Secondly, starting point guard Kyle Lowry will be an unrestricted free agent next summer and could potentially leave without netting an asset in return this summer. Lastly, the 2014 draft class is expected to be one of the best in years and if Toronto keeps up the winning ways, they could easily find themselves on the outside looking in at the coveted crop of newcomers.

The latter option, blowing things up further in order to rebuild, comes with its own set of risks too.

The Raptors have numerous pieces to dangle on the trade market that could generate solid returns for the future. Lowry’s name has been in trade rumors for the majority of the season, for instance. Shooting guard DeMar DeRozan, who is having a career year averaging over 21 points per game, would undoubtedly generate plenty of interest (and an assortment of assets) should Ujiri be willing to deal in order to create more financial flexibility.

As it stands currently, the Raptors have just $39 million in salary commitments next season.  Amir Johnson ($7 million), John Salmons ($7 million) and Tyler Hansbrough ($3 million) all have non-guaranteed deals for the 2014-15 campaign. The team must also decide the long-term role of Patterson and Vasquez, who are both likely headed to restricted free agency this summer.

The Raptors’ recent run has been impressive, but the true question is whether Ujiri will stay the course to see how this unit plays out the second half of the season or will he continue scouring the market looking to make deals in order to shape the team in his own vision.

It’s a tough decision and one we should have even more clarity on as we get closer to the Feb. 20 trade deadline.