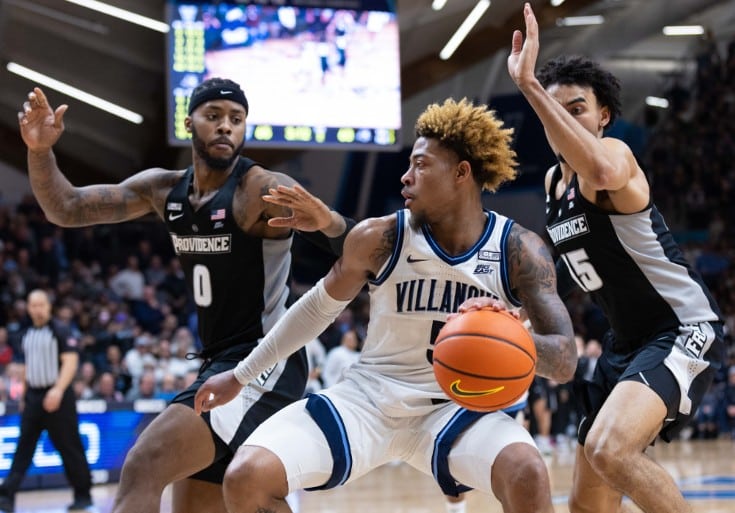 Sportsbooks have released their betting odds for the 2022 Big East Conference Tournament of the 2021-22 NCAA men’s basketball season. The top contenders include the No. 1 Providence Friars, No. 2 Villanova Wildcats, No. 3 UConn Huskies and No. 4 Creighton Bluejays. Madison Square Garden is hosting the entire tournament.

The Best NCAAB Bets for the 2022 Big East Conference Tournament

Before we break down the best bets for the Big East Conference Tournament, check out some of the best free bets and sports betting bonuses available for March Madness games.

Based on the available odds provided by BetOnline oddsmakers, the No. 8 Villanova Wildcats are the number one favorite to win the Big East Conference Championship. The ranking above is based on the AP Poll. Anyways, they concluded their regular season with a record of 23-7 (16-4 Big East).

Since their 71-69 loss versus the No. 21 Connecticut Huskies, they have not lost a game. The team is entering the conference tournament on a two-game winning streak. Last season, during the quarterfinals, the Wildcats lost 72-71 to the Georgetown Hoyas.

The No. 20 UConn Huskies finished their schedule with the third-best record in the Big East standings, trailing the No. 11 Providence Friars and No. 8 Villanova Wildcats. Their overall record is 22-8 (13-6 Big East). This fact alone explains why they are the biggest threat to the Wildcats.

Guard R.J. Cole led UConn on the stat sheet, averaging 15.8 points and 4.1 assists per game. Not to mention, forward Adama Sanogo averaged 8.6 rebounds and 2.1 blocks per game during the regular season. Nonetheless, in the 2021 Big East Conference Tournament, UConn lost to Creighton in the semifinals.

Moreover, the No. 11 Providence Friars have the best record against their conference opponents. They closed out their regular season 24-4 (14-3 Big East). Despite displaying top-notch basketball versus their rivals, expectations are low for the Friars.

Even when Providence possessed the No. 6 seed in last season’s Big East Tournament, the team was upsetted by DePaul. Not to mention, No. 11 Villanova defeated them 76-74 on Mar. 1. More than a few bettors would refer to the Friars as paper tigers. Now is the time for Providence to prove doubters wrong.

They have improved on their 13-14 (8-11 Big East) record from the previous season. During last season’s Big East Tournament, the Golden Eagles lost to the Hoyas in the first round. Then, head coach Steve Wojciechowski was fired on Mar. 19, 2021. Current head coach Shaka Smart was hired soon after, and Coach Smart knows his team is in better shape right now.

Next, the unranked Xavier Musketeers are what many gamblers would call a battle-hardened contender. They have plenty of playoff experience, so that’s not the problem. With a record of 18-12 (8-11 Big East), oddsmakers are expecting this team get knocked out in the first round. Xavier lost five of its last six games to close out the regular season.

The Musketeers’ five-game losing streak came to an end on Mar. 5, when they beat the Georgetown Hoyas 97-75. Look at the teams they lost to in the final weeks: St. John’s, No. 24 UConn, No. 11 Providence and Seton Hall. Can they turn over a new leaf in a short amount of time? You decide.

Lastly, the unranked Creighton Bluejays are more than capable of making noise in the Big East Tournament. They are arguably the best unranked team in the conference. Also, the Bluejays ended their regular season 20-10 (12-7 Big East). Forward Ryan Hawkins leads Creighton in points and rebounds, averaging 14.3 points and 7.7 rebounds per game.

Was last season a fluke? Creighton went all the way to the Sweet Sixteen of the 2021 NCAA Tournament. It was the first time they advanced to the Sweet Sixteen round since 1974. Their record in the 2020-21 NCAA men’s basketball season was 22-9 (14-6 Big East). They are not much weaker this time around.

Furthermore, the unranked St. John’s Red Storm are being overlooked for a variety of reasons. First off, no one knows which team is going to show up on any given day. For the past three months, St. John’s won back-to-back games only then to lose consecutive contests. The team’s inconsistencies are quite nerve-racking for gamblers.

They closed out their regular season 16-14 (8-11 Big East). One can’t help but wonder what happened, though. When playing non-conference teams, the Red Storm are 8-3. While Big East competitors have their number, they still defeated Xavier and Butler twice.

Taking everything into account, the Villanova Wildcats are a terrific pick to win the Big East Tournament. If not the UConn Huskies, the Wildcats have what it takes to survive during March Madness. Villanova has a 12-1 record at home and 9-5 record away. More importantly, their record at a neutral site is 1-1, and the team is 6-1 in its previous seven matchups versus Big East opponents.

On the other side, the UConn Huskies are 13-2 at home, 5-5 away and 3-1 at a neutral site. However, the Huskies are 0-4 as an underdog. Considering they are 2-8-1 against the spread in their past 11 matchups versus Big East teams, the advantage here goes to the Wildcats. Although many would disagree, the Wildcats are the best pick to win the 2022 Big East Tournament.