The Warriors were given little chance in their series against the Clippers after the loss of defensive anchor Andrew Bogut. But that loss has been more than offset by the hamstring injury suffered by Chris Paul, a player I ranked as the NBA’s third-best player in February. Unfortunately, Paul has been very ordinary in this series. In fact, he has never been any better than the third-best player on the floor in any game.

While history has examples of players gutting out other injuries, hamstrings don’t really work that way. Unlike injuries that supposedly “can’t get any worse,” a hamstring injury can always get worse if you push it. A player nursing such an injury is always playing at three quarters speed, unable to truly explode at the critical moment. From Magic Johnson in the 1989 Finals through Paul today, there really are no examples of players performing at a really high level through hamstring injuries.

An injured Paul has been a perfect matchup for the Warriors’ Klay Thompson. The 6’7 Thompson has defended point guards all season, but Paul has a quickness advantage on him as he showcased in a 42-point performance in the second game of the season. Now that advantage is gone. The clip below shows how bothered Paul is, as the ordinarily slower Thompson prevents him from even getting into the play. 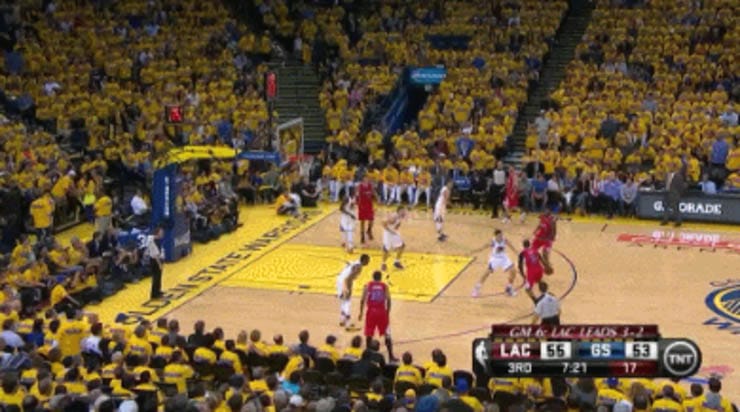 Thompson has used his length to smother Paul and prevent him from getting to his favored right hand.* Without the ability to go right for jumpers or go by Thompson to his left, Paul has been stymied.

*In isolations, Paul goes right 76.6 percent of the time. While this does not include pick and roll situations, it is a good proxy for what he feels most comfortable doing.

And on the rare occasions he has gotten to the basket, Paul hasn’t quite had the juice to finish. 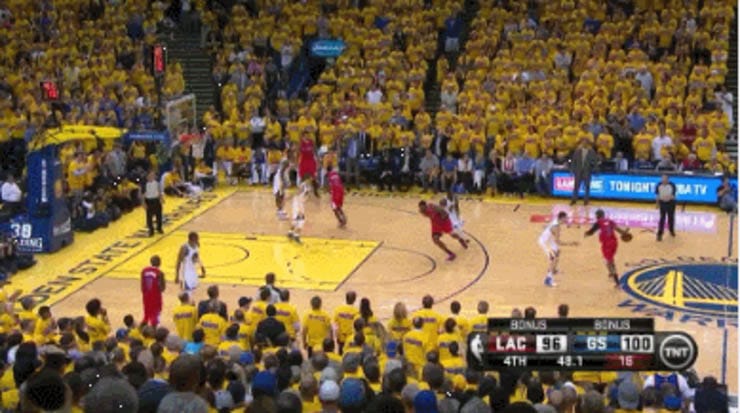 His only facet of good (by his standards) offensive play has been on his set shot three pointers, on which he has shot 16 of 34 in the series. Paul has still had some success scoring off a short pick and roll originating in the elbow area, a trend that has been very effective throughout the league. But the Clippers have run them sparingly, and when they have the Warriors have at times known they are coming and succeeded in denying him the ball at the elbow.

Defensively Paul has still been fantastic, helping hold Curry to only one dominant game in the series. Hamstring injuries are a little easier to manage on defense, where the need to explode straight forward or jump as high as one can (the two most common ways to hurt a hammy) is lessened. Paul has proved impossible for Curry to separate from in isolation (see his game-ending stop on Curry in Game 3), and has often stymied the pick and roll and pin down games with his ability to get over screens. And his quick hands have harried Curry into a gaggle of turnovers. He has even succeeded in getting to Curry’s signature one-handed hook passes on multiple occasions. 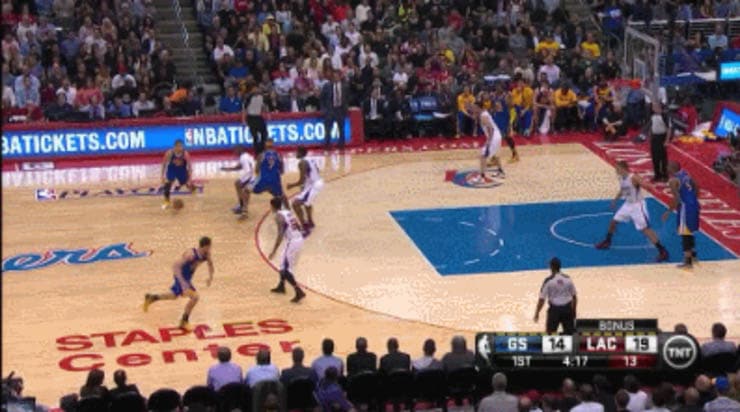 While the hamstring has not seemed to hurt Paul on defense, it has limited his minutes. Stephen Curry has played at least 42 minutes in every competitive game of the series and 45 minutes in Game 6, but Paul was only able to manage 34 minutes on Thursday. Paul was nevertheless +8 in the Clippers’ one-point loss, while his backup Darren Collison was -12 in his 20 minutes. Curry has feasted on Collison, as the thin UCLA product is one of the worst point guards in the league at getting over screens. As a result, Collison has by far the worst defensive rating of any Clippers player during the series. Paul’s injury has not only limited his impact when he is on the floor, but increased his time off of it.

The injury to Paul has taken backseat to all of the drama surrounding the series. But it is a shame neither is playing, especially considering this is now the third straight injury-marred post-season for one of the Clippers’ two superstars.  Few remember now that Blake Griffin (sprained knee) and Paul (strained hip flexor) were hobbled in their 4-0 loss to San Antonio in 2012.  And the Clippers’ loss to the Grizzlies last year was marred by the high ankle sprain Griffin suffered in practice prior to Game 5.

With Paul at 100 percent, it is likely this series would have been over long ago. Unless he can summon a vintage effort in Game 7, the Warriors should have a much better chance to win than the typical ultimate game road team.