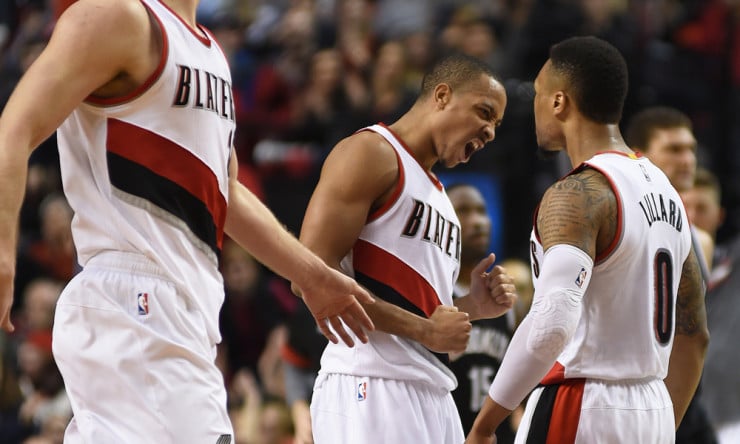 You have to give the Los Angeles Clippers credit – they played a tough game on Wednesday night against a more talented Portland Trail Blazers team. In their first game since losing Chris Paul and Blake Griffin to season-ending injuries, the Clippers rolled out a starting lineup of Austin Rivers, Jamal Crawford, J.J. Redick, Paul Pierce and DeAndre Jordan. That’s a severely flawed lineup and is one that highlights how much of a swing in talent there was in this series when Paul and Griffin went down.

But the Clippers didn’t give in. They were aggressive and opportunistic on offense and held Damian Lillard to six points through the first three quarters of the game. Lillard missed some shots he normally makes, but the Clippers did a good job of sticking on him as much as possible, forcing him into some tough looks. But it was only a matter of time until Lillard settled in and that happened in the fourth quarter, where Lillard scored 16 of his 22 points. He got a lot of the same tough shots, but he simply started making them. The Clippers could have played better overall defense in the fourth quarter, but more so than anything else, Lillard was simply hitting the type of shots where you simply shrug your shoulders and move on to the next play.

The Clippers got a nice performance out of Jeff Green, who contributed 17 points, six rebounds and two assists. The same cannot be said for Rivers, who did score 13 points, played active defense and had an impressive dunk over Ed Davis. However, Rivers logged just three assists and the team was outscored by 23 points over the roughly 37 minutes he was on the court. With Paul out, the starting point guard’s main job should be to setup teammates for easy looks, which is what Paul does better than most. Of course, Rivers isn’t Paul and shouldn’t be compared to him, but logging just three assists in nearly 40 minutes of action isn’t good enough – even noting that he is missing some of his biggest weapons on offense.

On the other hand, Pablo Prigioni was a +9 in the roughly 15 minutes he played. Prigioni certainly isn’t the solution to replacing Paul (few are), but he is a true point guard that looks to setup his teammates first and foremost. He and Cole Aldrich have a nice chemistry in the pick-and-roll, a set that usually generates spacing and decent scoring opportunities for their teammates. Playing Prigioni more frequently may not lead the Clippers to a victory in Game 6, his performance in Game 5 warrants a bump in playing time.

The Clippers are obviously outmatched in talent without Paul and Griffin and are severely vulnerable going into Game 6 in Portland. We’ll have to wait and see if they have the same level of energy and resilience on Friday night as they did in Game 5.

Prediction: The Clippers keep things close over the first two quarters, but the Blazers breakaway in the second half to close out the series.