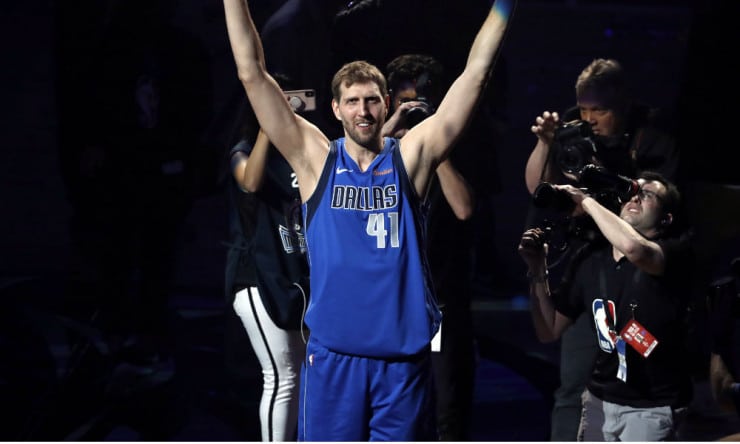 Dirk Nowitzki had a legendary career in the NBA with the Dallas Mavericks. He was a 14-time all-star, 12-time All-NBA, 2006-07 league MVP, and a 2011 NBA champion. Nowitzki revolutionized the game of basketball for the modern big man. There were not many seven-footers in his day that could shoot like he could, sporting a 38 career three-point percentage. The Mavericks retired Dirk’s number 41 back in January and now they’ll have another special occasion for him.

He is without a doubt the greatest player in Maverick’s history and even has a street named after him. At sometime today Dirk is also expected to announced as a nominee for the 2023 enshrinement class of Naismith Memorial Basketball Hall of Fame. To make it even sweeter, the Mavericks will be unveiling a state of Dirk inside the American Airlines Arena. A true honor for him and his family after all the sacrifices he gave to that franchise over the years.

We got to see the statue of Dirk Nowitzki being installed early this morning as we got to our studios at the American Airlines Center before it was covered completely @HawkeyeOnAir pic.twitter.com/TwJjpYIF8q

Dirk Nowitzki to be honored with statue on Christmas Day

“It’s been super surreal,”… “and a little embarrassing for me.” – Dirk Nowitzki

He was a true pioneer for international players today. Dirk proved to all those overseas who wanted to be a pro that it could be done. That inspired this next great generation of international talent like Nikola Jokic, Joel Embiid, Giannis Antetokounmpo, and Luka Donic who Dirk played with in his final season. Nowitzki had this to say about how exciting it’s been to watch this new crop of international talent take over the league.

“It’s been super fun to watch,”… “And along the way, if I inspired somebody to pick up a basketball or if I motivated a guy to work harder or dream of the NBA, of course, that’s humbling to me … super humbling. That makes me proud, for sure.” – Dirk Nowitzki