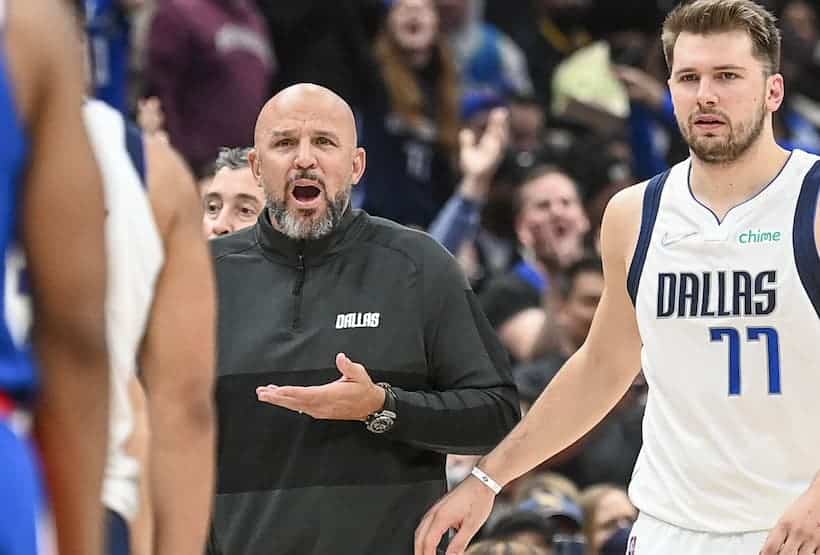 There’s no denying how impressive Luka Doncic is. His game is so polished for how young he is and he’s a serious MVP candidate this season. However, the Mavericks have struggled to find consistent wins all season and have a 15-16 record which is tenth in the Western Conference. In their 116-106 loss to the Timberwolves last night, both head coach Jason Kidd and superstar Luka Doncic were ejected from the game. Dallas were letting the officials hear it for most of the game and it all eventually piled up.

Doncic and his head coach were both ejected from the game with about two minutes left in the third quarter. Luka couldn’t believe he was ejected from the game and his head coach tried standing up for him and that got Kidd tossed soon after. Dallas were fighting from behind all game after a 14-point second quarter. The Mavs did score 32 points in the fourth, but it wasn’t enough to stop Anthony Edwards 29 points, 13 rebounds, and 9 assists in their win vs Dallas.

NBA betting sites have the Mavericks at (+3500) to win the Finals this season.

Luka Doncic and Jason Kidd have been ejected from tonight's game. #MFFL | @dallasmavs on @BallySportsSW 📺 pic.twitter.com/XMC1EEaHp9

Doncic and Kidd both ejected from Mavs vs T-wolves game

Luka Doncic has been known to lose his cool in games sometimes and it’s lead to ongoing technical foul issues. It happened again last night vs the Timberwolves. He knew he was already playing with one tech and must have said something to a ref to get his second technical of the game. Jason Kidd followed soon after and he was ejected after he was almost chasing the referee to try and get an explanation. He had this to say after the game about the whole incident.

“I’m here because I have to be. I already gave up money, so I don’t want to give up any more, so no questions. We’ll go back and look at the tape and see how we can get better. They were the better team tonight and we’ll go from there. Thanks for showing up. ” – Jason Kidd

Kidd was very blunt with his comments after the game and clearly had more to say, but was holding it back as he didn’t want to lose more money for dumb comments.  Injuries are starting to pile-up for the Mavs and they seriously need to think about making a trade to get Luka Doncic some much needed help this season.