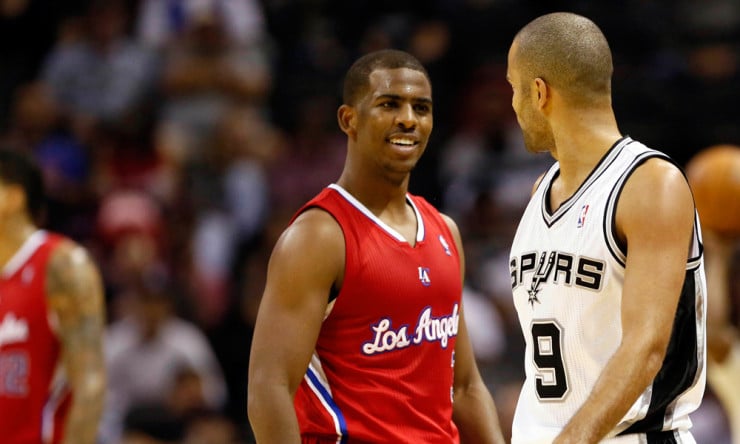 At times, the proverbial basketball gods can have a peculiar sense of humor, as the Los Angeles Clippers had to endure a series of injuries to key players as well as roster issues throughout the year. They found a way to finish the season on a 14-1 stretch while securing home court advantage for the first round even while navigating a ridiculously tough Western Conference playoff race, and still find themselves in what is certain to be an all-out dogfight with a strategically-rested San Antonio Spurs team that also happens to be playing its best basketball of the season.

To be successful in Sunday’s Game 1 match-up against the Spurs at Staples Center, let alone in what should be an entertaining series, the Clippers are going to have to capitalize on the significant advantage they have in terms of frontcourt athleticism. DeAndre Jordan’s rebounding and patrolling of the paint (in particular) were difference-makers in the two games the Clippers won against the Spurs this season. The soon-to-be free agent averaged 18.5 rebounds and 2.5 blocks in the victories compared to just 12 rebounds in the two losses to the Spurs.

Coach Doc Rivers cannot afford to have Blake Griffin and Jordan be outplayed and outworked by the likes of an aged Tim Duncan (eventual lock for the Hall of Fame or not), Aron Baynes or Matt Bonner. However, it will be interesting to see how Rivers responds to Boris Diaw and/or Bonner playing with the starting unit in the event that Tiago Splitter is unavailable for the series due to a right calf injury.

As has seemingly become the norm, people have been attempting to write the San Antonio Spurs off for the better part of the season. The “Father Time is undefeated” stories ran rampant just following this year’s annual Rodeo Trip (4-5), but the Spurs simply went about their business as usual – acknowledging the benefits of a slow, but steady pace over the course of what has become a grind of an 82-game NBA regular season. While you generally know what to expect from veterans like Tim Duncan and Tony Parker, the true x-factor for this current Spurs team continues to be last season’s Finals MVP in Kawhi Leonard. Leonard spent the better part of March and April reminding all of us just how effective he can be on both sides of the court (averaging 19.7 points, 5.3 rebounds, 3.1 steals in April) and appears to be even more comfortable pacing the team’s offense when necessary than in years past.

Coach Gregg Popovich’s ability to use Leonard’s athleticism and length to make Chris Paul’s life more difficult could ultimately be the greatest determining factor in this series. Leonard probably won’t draw that assignment for the entire game, but look for Popovich to utilize him on Paul for stretches and for late-clock/quarter situations throughout the series.

The battle of supporting casts could also play a huge determining factor in this series, as (not surprisingly) the Spurs tend to rely upon a more balanced attack while presenting scoring and contributing opportunities to just about everyone that steps onto the court, while the Clippers still lean quite heavily upon the exploits of Jamal Crawford (15.8 PPG) on most nights. The match-up between Crawford and Manu Ginobili could be worthy of the price of admission (alone) for certain stretches of this series as well.

If there’s a team you better take care of business against in Game 1 at home, it is absolutely the Spurs. The Clippers have to view this as a “statement game” and must set the tone for this series in a win.