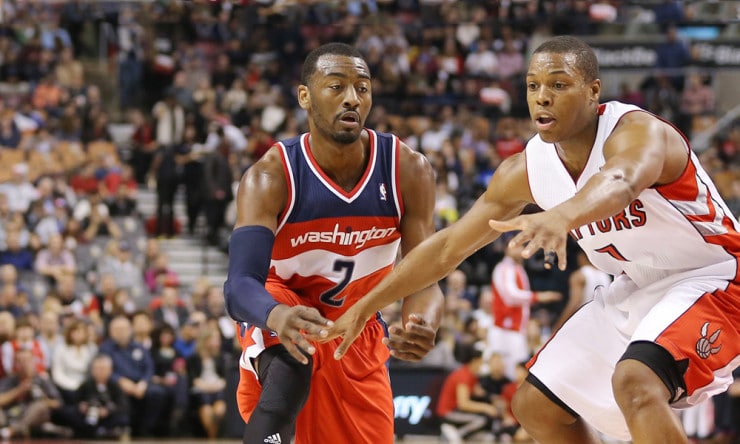 In what can only be considered a worst-case scenario for the Toronto Raptors, they will head to Washington, D.C. having lost both Game 1 and Game 2 in Toronto. Unfortunately for them, things will not get any easier, as the Washington Wizards have suddenly reverted to the team that we saw earlier this season. After winning the first two in Toronto, the Wizards team that finished the season 15-21 now seems like a distant memory.

In Game 2, the Wizards dominated, taking the lead with 4:19 remaining in the second quarter and never looking back. Bradley Beal bounced back from his poor shooting performance in Game 1, converting on 12 of his 21 shots attempts in Game 2 en route to scoring 28 points.

John Wall added 28 points and a Wizards playoff record 17 assists. The Wizards led by as many as 23 points and, as the series shifts to Toronto, have seemingly seized the momentum.

For the Raptors, the alpha and omega of their aspirations is squarely on the shoulders of Kyle Lowry. Lowry has battled a sore back over the course of the past few weeks and left Game 2 early with a bruised left shin. He was plagued by foul trouble in Game 2 and, to this point, has been a non-factor in the series, combining to shoot just 5-for-20 from the field and scoring 13 points.

Fortunately, for the Raptors, their reserves have done an admirable job picking up the slack. After getting 48 points off the bench in Game 1, in Game 2, the reserve unit scored 56 points, including 20 points from the winner of the 2015 NBA Sixth Man of the Year Award, Lou Williams.

DeMar DeRozan and Jonas Valanciunas pulled their weight in Game 2, but without Lowry performing at his usually high level, the Raptors are in a tough predicament, especially if they cannot find an answer for Wall’s speed. The number one priority for the Raptors in Game 2 should have been slowing Wall down and forcing the Wizards to beat them in a half court game, but they ultimately failed.

What makes the Wizards dangerous is the fact that they have multiple weapons that can hurt the Raptors on the offensive end, and through Game 1 and Game 2, we have seen that. Predictably, Paul Pierce was unable to follow up on his strong effort in Game 1, but in Game 2, Bradley Beal bounced back in a serious way. En route to his 17 assists, John Wall’s teammates converted a great many of the shots they botched in Game 1 and in the end, it showed in the box score.

If Otto Porter is able to produce off of the bench for the Wizards, his production will go a long way toward helping the Wizards outlast a Raptors team that is playing without its starting point guard being at full strength.

If the Raptors are to have a chance in this series, they are going to have to beat the Wizards with effort, and thus far, they have failed miserably in that area. In Game 2, the Wizards won the rebounding battle, 45-28. They blocked more shots, shot more free throws and scored more fast break points.

The most appropriate word to describe the Wizards’ Game 2 performance would be “dominant,” and heading to Washington, D.C., there is little reason to believe the trend will not continue.

Knowing that they are fighting for their playoff lives in Game 3, one should certainly expect the Raptors to give it everything they’ve got; the only question is whether they have enough to give. Without Lowry operating at near 100 percent, the Raptors are in danger of getting swept. As it stands, the Raptors do not seem to have any discernible advantage over the Wizards. The hope entering the series was that Lowry and DeRozan could cancel out the productivity of Wall and Beal, but thus far that certainly has not been the case.

For the Wizards, though their bench may lack the scoring punch of the Raptors’, role players and reserves tend to perform better at home than on the road, meaning that the odds of the Raptors reserves scoring in the neighborhood of 50 points diminishes. That also means that Otto Porter, Drew Gooden and Ramon Sessions may see an increase in their productivity, as well.

Game 3 will boil down to what Lowry is able to contribute, whether Wall can continue to control the pace, hustle plays and bench productivity.

A series that was originally thought to be long and drawn out now looks to be over in short order, that is, unless Lowry is suddenly able to make an astonishing turnaround.

At this point, though, that is not something we are betting on, just like we are not betting on the Raptors to win Game 3, or this series.