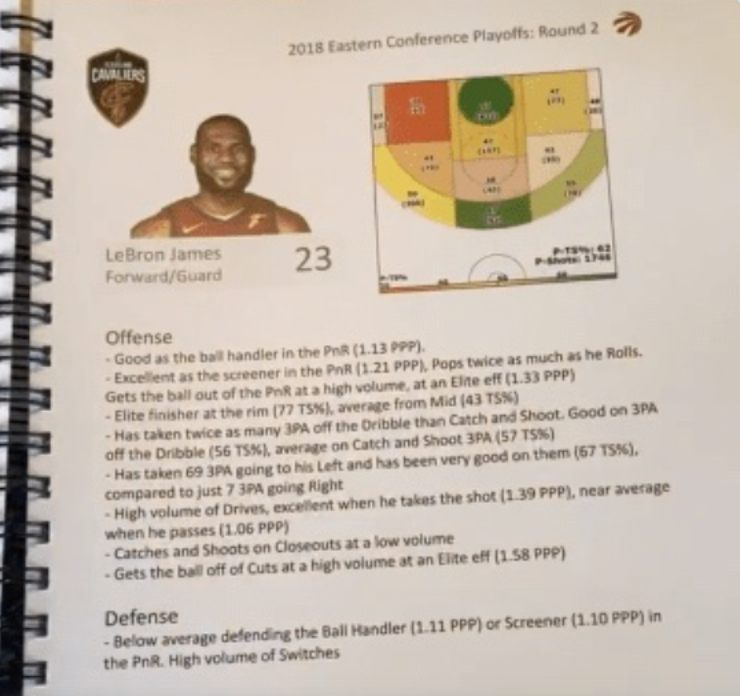 Former Raptors center Lucas Nogueira leaked the team’s 2018 playoff scouting report on LeBron James, John Wall and Bradley Beal. What did the NBA contender think of these players? Find out below.

According to the leaked scouting report, the four-time NBA champion was considered a “good” ball handler for pick-and-roll plays and “excellent” as the screener. While James was an “average” mid-range shooter, he was also “elite” at finishing near the rim.

The report noted that James took twice as many 3-point attempts off-the-dribble than on catch-and-shoot plays. And he is a great player at creating high volume of drives.

"Catch and shoots on closeouts at a low volume."
"Below average defending the ball handlers or screener in PnR."

Plus, he was marked down as “good” as a 3-point shooter off-the-dribble. Furthermore, LeBron was an “average” passer while driving, but he worked as an “excellent” shooter on the drive.

For his defensive assessment, James was thought of as “below average” on defending the ball handler or screener in pick-and-roll plays. The report also concluded with “High volume of switches.”

Next, Wizards guard John Wall’s 2018 playoff scouting report was also leaked. The best tactic the Raptors recommended on Wall was dropping him into pick-and-roll coverage to prevent him from driving to the rim.

The report also labeled the five-time All-Star as an “above-average” finisher at the rim. Wall was seen as a terrible high-volume shooter from mid-range and a below-average 3-point shooter off the dribble.

The guard is “good” when he takes the shot or passes.

Former Toronto Raptors center Lucas Nogueira released these team scouting reports on John Wall and Bradley Beal from round one of the 2018 NBA Playoffs.

Why? I don't know. But cool. pic.twitter.com/qGUWz2FbwA

Lastly, Wizards guard Bradley Beal was viewed as an “average” high-volume isolation player. Along with serving as an “average” pick-and-roll option, he was listed as “good” for finishing at the rim. Also, Wall was “above average” on off-the-dribble 3-pointers and on mid-range shots.

He was “good” on catch-and-shoot looks as well. In addition to being described as “above average” when he dribbles, Beal was viewed as “elite” on shooting when he gets the shot off against closeouts.

On defense, the guard was analyzed as an “average” pick-and-roll defender.

The 2017-18 Raptors ranked at the top of the Eastern Conference. They finished 59-23 (.720) in the regular season. During the second round of the 2018 NBA Playoffs, the Raptors were swept by LeBron and the Cavaliers. More news stories concerning the 2018 playoff scouting report are on the main page.