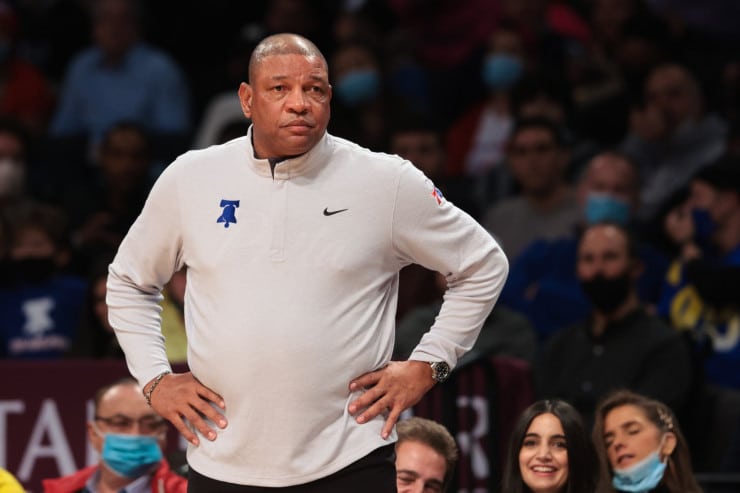 The NBA trade deadline has come and gone, with the blockbuster deal sending Ben Simmons to Brooklyn, while the Philadelphia 76ers make a win-now move by acquiring James Harden. Both sides got what they wanted in this deal, but all of the expectations and pressure are squarely on the shoulders of Sixers head coach Doc Rivers.

One of the advantages of having a veteran coach like Rivers is that he has seen and dealt with a lot of things in this league. Known for his incredible championship season in Boston with four Hall-of-Famers, he has also had his share of failures along the way. He has often been labeled as “overrated” by some, but this could be his greatest chance to squash those pundits.

This situation in Philly is a tricky one for the 60-year old coach. He now has two dominant star players that both need the ball to be effective. The challenge will be for him to figure out how to best pair these two on the court, in order to play to their strengths. These two don’t exactly go together like peanut butter and jelly, but there will be time for them to work on that before the postseason arrives.

The #sixers have 28 regular season games remaining. Enough time for Embiid and Harden to gain some familiarity together before the playoffs start.

No matter which team he forces himself to, Harden has always played the same style of basketball. He will slowly bring the ball up the court, do some isolation moves, and make a decision to drive, shoot, or pass at the end of the shot clock. That is a stark contrast to how the 76ers have played so far this season.

Philadelphia has made it a point of emphasis to run their offense through Embiid. Whether he starts on the block or brings the ball up the floor to initiate the offense, the ball is in his hands. The big man leads the league in touches and is second in the NBA in touches per minute, and the team has been much better for it.

At the time of Thursday’s trade, Embiid was the odds-on favorite to win the MVP award this season. His numbers have been great all year, but the stat lines he was putting up in January were absurd. If ever a player was carrying a team on his back, it was this man. To that tune, the rest of the team has played well and the team was battling for the top spot in the loaded Eastern Conference.

That all could very well change with the integration of Harden. Just as he did in Houston with Chris Paul and Russell Westbrook, he doesn’t seem to fit well with his playing style next to another star player. His time in Brooklyn was another example of this, never seeming to gel with either Kevin Durant or Kyrie Irving when they shared the court together. The last time he played with a great center (Dwight Howard) things didn’t turn out so well.

James Harden has 0 margin for error in Philadelphia. He has not been able to make it work with Kevin Durant, Kyrie Irving, Chris Paul, Russell Westbrook, Carmelo Anthony & Dwight Howard.

The 76ers are Joel Embiid's team.

One thing that Philly has going for them is the fact that these two superstars know how to get to the free-throw line. They rank 2nd and 3rd behind Giannis Antetokounmpo in terms of free throw attempts per game this season. If their half-court or transition offense is struggling to put points on the board, they know how to make up for it.

A major concern for this team is their depth, which took a hit with the departures of Seth Curry and Andre Drummond. While they were able to retain key young players like Tyrese Maxey and Matisse Thybulle, they lost arguably the best shooter and one of the best backup big men in the league. They may feel the effects of both as the season progresses.

The 76ers rank 11th in terms of three-point percentage this year, and they could very well be middle-of-the-pack by the end of the season. Drummond leads the league in per-minute rebounding average and gave them an excellent insurance option in the unfortunate event that Embiid went down. Health is a major factor for this team, and there are some legitimate concerns with their two stars.

Embiid’s injury history is well-documented, but so far this season that has not been an issue. Being able to finish the rest of the regular season and make it through the playoffs is a big concern. Harden has also had nagging injuries slow him down the past couple of years. If he doesn’t get in shape and focus on his body, it could be a rough road ahead.

As part of this trade, Harden opted into his player option for next season, which is over $47 million. This allows him to sign a maximum contract of five years, $270 million after that. For a 33-year old with an injury history, that is a scary situation for any team. With his salary structure for that, he would be making more than $60 million when he is 38 years old. There is a real chance it could become the worst contract in the history of the league.

"In three years … we're going to be talking about James Harden like we're talking about Russell Westbrook and John Wall from a contract standpoint. That contract will be the worst contract in NBA history."

The two draft picks that were sent to Brooklyn in this deal should also be mentioned, but it will obviously have no effect on how this season plays out. It will be up to Rivers and his staff though, to manage the minutes of these two going forward. Finding gaps for them to rest while the other is on the court will be key.

Both Rivers and Harden have had their fair share of playoff collapses over the years. Rivers blew a 3-2 lead in the 2010 Finals and has lost three series when his team had a 3-1 lead. Four of those were game 7 losses at home. Outside of that title run in 2008 with Boston’s big four, Rivers doesn’t have much else to hang his hat on.

For all of his regular-season accolades, Harden has failed to show up in the big games. His disappearing act in the 2012 Finals pales in comparison to his time in Houston when he repeatedly came up empty against the Warriors. When the team needed him most, he simply choked. Now, both have a chance to eradicate those notions with a playoff run this year.

Philadelphia is all-in on this season, which is what they should have done. Daryl Morey made the right move, even though it could cost them in the long run. This team led by Rivers is set up nicely for a playoff run, but Milwaukee, Brooklyn, Chicago, Miami, and Cleveland will all have something to say about that. Welcome to the wild, wild, East.