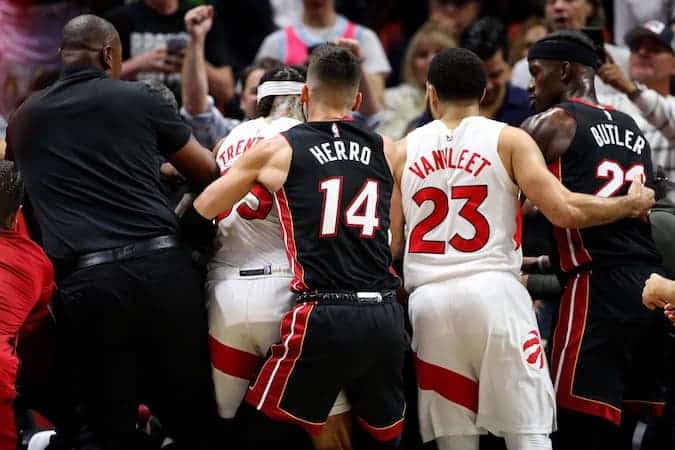 Miami Heat and Toronto Raptors will clash once again Monday night, just two nights after they previously played, where tensions flared up in the third quarter. Heat will be down two players after the events.

There is two suspensions following the brawl, and they’re both for Miami, so will be without two players for the rematch tonight.

Firstly, Heat’s Caleb Martin has been suspended for one game without pay by the NBA, after it was determined that he was the instigator in the scuffle with Christian Koloko, who’s punishment was a $15,000 fine.

Also, Heat rookie Nikola Jovic has also been suspended for one game without pay by the NBA, after he left the bench area and entered the altercation.

The following was just announced: pic.twitter.com/BhnSzARgF3

Tempers flared after Martin fouled Koloko, which Koloko bounced up quickly to, and then Martin tackled Koloko into the crowd, however luckily, there was no fans occupying those seats at the time, however nearby spectators did have some contact with those involved in the brawl.