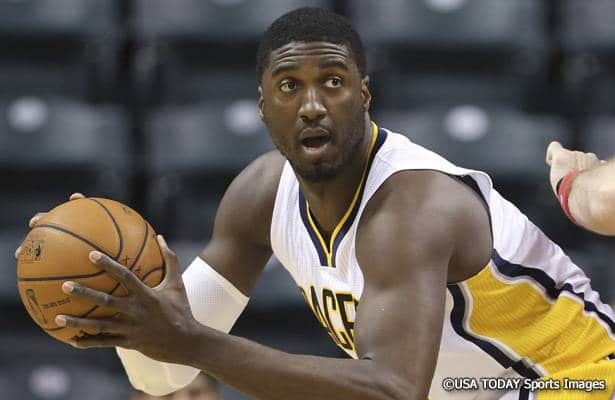 If average-sized people sleep in king beds for extra space, what is a 7-2, 290-pound man supposed to do?

Indiana Pacers center Roy Hibbert solved that problem by ordering a custom-made eight-foot by nine-foot bed. He posted a photo on Instagram with the caption, “Got my new bed yesterday. 8 x 9 feet #JustRight #Goldilocks. What y’all think?”

On Saturday, just after a few nights of slumber, Hibbert was already raving about it.

“When I was in college I used to sleep on a twin but then I put two twins together and the bed was always hard,” Hibbert told Basketball Insiders after the Pacers defeated the Boston Celtics. “So when I got into the league, I bought a California king and found the softest one. That was probably the biggest mistake I ever made because it hurts your back when you wake up. So my fiancée found a company that makes large beds like that and I just said, ‘Make the biggest one you can get.’ It’s a firm bed, more than she would like. We bought custom sheets and everything.”

Beds aren’t the only super-sized aspects of Hibbert’s home, which was previously owned by an NFL player. He has an extra-large shower and tall sinks in the bathroom. The ceilings and doorways are also high as well.

“Seriously, in my house I would never hit my head on the doors,” he said.

Hibbert also purchased a custom-made couch to make sure his back and legs are available to rest comfortably.

“A lot goes into it, how you sit, how you lay down, if it’s too low,” he said. “You have to make sure there is a back, not just pillows, because that’ll mess up your back. It’s a lot of small things.”

When it comes to cars he sticks with just one, an Escalade he bought his rookie year. He had the seats adjusted (four inches back, three inches down) so his knees don’t cramp up on long drives. Hibbert admits he’d like to be able to fit into a sports car, but he doesn’t know how to drive stick.

With all these built-to-fit items, Hibbert has few wants these days — “I’m pretty content with everything I have,” he said. There is one thing, though, still on his wish list.

The life size replica iron throne from the television series “Game of Thrones.”

“I want it for the head of my dinner table,” Hibbert said, excitedly showing a picture of it. “My fiancée doesn’t think it’ll look good in the living room.”