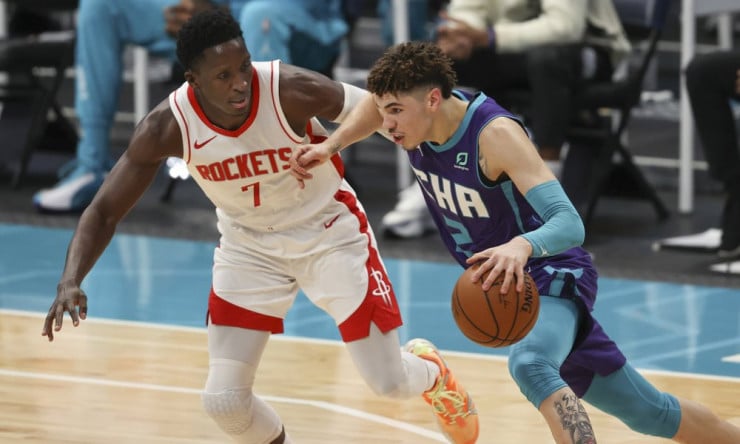 The Charlotte Hornets (5-7 SU, 5-7 ATS) will travel to Memphis to battle the Grizzlies (6-4 SU, 7-3 ATS) on Wednesday night. After starting the season 5-2, the Hornets have dropped five straight games. They’ve also failed to cover the spread in all five of those losses. The Grizzlies have won 3 of their last 5, including a dramatic comeback win on Monday, a game in which they trailed by 11 points to the Minnesotta Timberwolves with 4:30 left.

So, will the Hornets snap their losing streak or will the Grizzlies build on their emotional early week comeback to help them win back-to-back games?

The below lines are taken from BetUS.

For the Grizzlies, Ziaire Williams and Dillon Brooks are listed as questionable. This is the first time all season that Brooks has been upgraded to questionable. If Brooks plays, it would be his season debut.

Ja Morant & LaMelo Ball make tonight worth the price of watching Grizzlies-Hornets. But there’s a good chance Dillon Brooks makes his season debut after being upgraded to questionable.

On the potential return of Memphis' favorite stylish Villainhttps://t.co/GBNVsm6U2i

As for the Hornets, PJ Washington is out through November 15th with an elbow injury. Additionally, Mason Plumlee is questionable with a rib injury.

The Hornets are limping into this game, having lost five straight games while failing to cover the spread in each. To the defense of Charlotte, though, they’ve lost their last four on a west coast trip against the Warriors, Kings, Clippers and Lakers. After a day off Tuesday, this bout with the Grizzlies will cap off the five-game road trip.

The Hornets’ biggest weakness as a unit is on the defensive side. According to Cleaning the Glass, they are 28th in points per 100 possessions, 29th in eFG%, 24th in offensive rebound %, and 28th in free throw rate. Overall, they are dead last in defensive rating, according to NBA Advanced Stats.

The good news for the Hornets is that they are one of the better offensive teams in the NBA. According to Cleaning the Glass, they are 7th in points per 100 possessions, 2nd best at not turning the ball over, and the tenth best team at grabbing offensive rebounds. Overall, they are 6th in offensive rating and 4th in pace, according to NBA Advanced Stats.

As for the Grizzlies, paced by Jaren Jackson and Ja Morant, they are 10th in offensive rating according to NBA Advanced Stats. They don’t play fast, per se, ranking 18th in pace. But they are 9th in points per 100 possessions and 4th in offensive rebound % thus far. In other categories, like effective field goal %, they are middle of the pack.

Much like the Hornets, the Grizzlies leave much to be desired defensively. They are 28th in defensive rating, according to NBA Advanced Stats. They are also dead last in points allowed per 100 possessions and effective field goal % against.

The Grizzlies are also fresh off the heels of a miraculous comeback against the Minnesotta Timberwolves at home. Trailing by 11 points with 4:30 left, the Grizzlies stormed back to send the game to overtime and eventually get the win. If it weren’t for a Karl Anthony-Towns half-court buzzer beater, the Grizzlies would have won in regulation.

Trailing by 11 points in the fourth quarter, the Grizzlies had a win probability of only 2.2%. A wild finish for OT but the Memphis complete a great comeback win👏#GrindCity | #NBA pic.twitter.com/ivzEjYuk9l

On the surface, this is a battle between two teams headed in opposite directions. After starting out hot, the Hornets have lost five straight and would appear to be spiraling a bit. On the flip side, the Grizzlies have something special in Ja Morant and are looking to continue stacking wins.

But it is important to keep in mind that a double-digit comeback in the 4th quarter is fluky. In that game, the Timberwolves were 4.5 point underdogs like the Hornets are tonight and should have won outright easily. In many ways, too, the Timberwolves are a worse team than the Hornets. I think we will see the Hornets flex their pre west coast trip muscle tonight.

So while the Hornets are struggling mightily, this is a solid spot for them to grab a win to end an otherwise ugly road trip. In fact, I have the Hornets as the slightly better team in this matchup.

With this game pitting two bad defenses against each other, I lean over. But, my main play will be on the Hornets +4.5. There’s also a betting trend in this game that, at the time of writing, is active. The Hornets are receiving 42% of the tickets for this matchup, but also 63% of the money. Despite more of the action on the Grizzlies in this one, the line has moved from Hornets +5 to Hornets +4.5 a couple of times as well. The public perception of the Grizzlies may be too positive coming off a wild come-from-behind win on Monday, so consider a play on the Hornets to snap their losing streak, or at least to come close by covering.