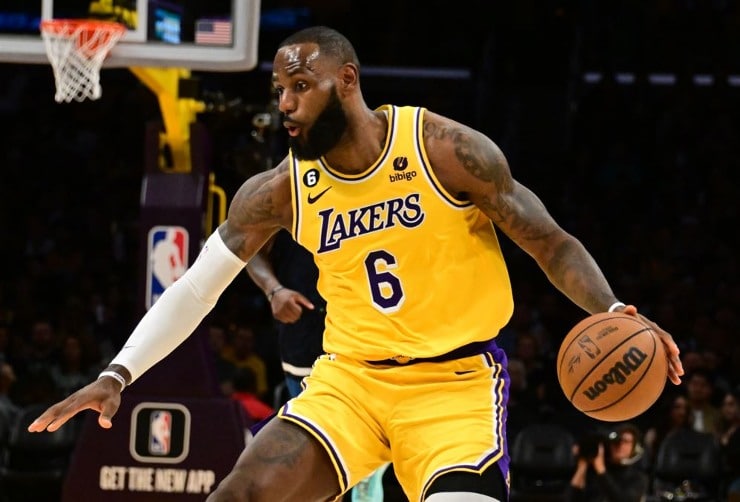 The Los Angeles Lakers are 2-9 and rank 14th overall in the Western Conference, so is LeBron James pushing for more firepower by advocating a trade for Kyrie Irving?

On Thursday, LeBron came to Irving’s defense on Twitter after the Brooklyn Nets suspended the guard for promoting anti-Semitism on social media.

According to some NBA betting sites, the Lakers have the 20th-best odds to win the championship in 2023. Following every other loss, a few sportsbooks drop their title odds.

the floor I think is excessive IMO. He’s not the person that’s being portrayed of him. Anyways back to my rehab session.

Per ESPN’s Zach Lowe, since the Lakers are wanting to go all in for the four-time MVP, a trade for Irving is not out of the question. “Look, I don’t know why LeBron James said what he said about Kyrie yesterday,” Lowe said.

“About how it’s time to bring him back in the league. Maybe he just said it because he believes, and there’s nothing else to it.

I can tell you around the league and even within the Lakers, some corners of it, those comments were read as LeBron opening the door to — at least opening the door to — ‘Hey, if you all are comfortable with it and all the blowback it would be, and the Nets are willing to just get out of the business now of Kyrie Irving so we can get him for much cheaper, not both picks, maybe one pick.'”

Is LeBron James convincing the Lakers to trade for Kyrie Irving behind closed doors?

Furthemore, the Lakers have their 2027 and 2029 first-round draft picks. Realistically, G.M. Rob Pelinka is not confident in trading away the team’s only first-round picks for the remainder of the decade for an undependable player.

Therefore, if the front office is unwilling to trade at least one first-round pick, perhaps the Lakers could negotiate a trade by surrendering superstar(s) rather than draft picks. Fans wonder if Irving is a better fit for L.A. at the moment than Davis.

Would the Lakers trade for Irving if LeBron James asked?

Off the bench, Russell Westbrook has improved. Even then, a trade package consisting of an injury-prone superstar and multiple second-round picks might not entice a team. But whatever the Lakers are doing right now is clearly not working.

Monologue at the end on the Lakers options, whatever pressure they might feel to move picks and players, and how the Nets/Kyrie fit into that (if they do at all):

Earlier this week, the Lakers reiterated that they have no plans to trade Davis this season. But even die-hard fans would admit that not one player is off limits for a trade, especially if the price is right for a superstar. LeBron James needs help.

However, Irving has proven himself unreliable these last several years. The 12-year NBA veteran has appeared in 111 games for the Nets, but he has also missed a total of 128 games. And that does not include his suspension.

This is an ugly situation for L.A.

If the Lakers traded for Irving, how many games would he play? The seven-time All-Star has not appeared in at least 70 games since his 2016-17 season with the Cleveland Cavaliers. He’s not worth his contract, let alone trading away Russell Westbrook or Davis for him.

If Irving is not the solution for the Lakers, he will quickly become their new problem. LeBron James is serious about winning another championship. At this point of his career, he cannot afford to fail.

For one interesting comparison, Kyrie Irving is the Antonio Brown of the NBA right now. But just like Brown, he’s a great player when making an appearance in any given game. It’s a matter of whether or not the risk outweighs the reward.