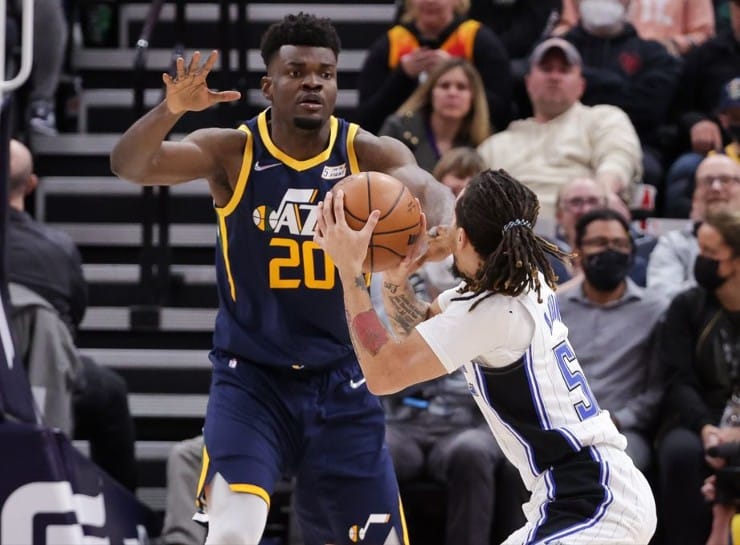 On Thursday, Utah Jazz center Udoka Azubuike practiced with his team for the first time in seven months. He finally received clearance to play.

“I was excited about it,” Azubuike told reporters after the scrimmage. “We did some exercises in the morning before practice, and that felt good. Then, me going out there, getting a rep and you know, I’m just excited. It really felt good.”

According to multiple NBA betting sites, the Jazz possess the third-lowest odds to win the championship in 2023. Following the Rudy Gobert and Donovan Mitchell trades, their low chance of winning a title should come as no surprise.

Open scrimmage was fun for everyone and we've got @udoka35 mic'd up to prove it 👉🎙#TakeNote pic.twitter.com/QZgHDVDK3L

In March, the 6’10” big man underwent right foot surgery, ruling him out for the remainder of the 2021-22 season. The 23-year-old has also recovered from an ankle injury he sustained while with the Salt Lake City Stars, the team’s NBA G League affiliate.

“It’s just really tough because I want to be able to be out there with my teammates,” continued Azubuike. “I want to compete, I want to play. But, I’m just approaching it with a different mentality, just doing what I can do and control.”

After recovering from an injury, one of the first things on an NBA player’s mind after stepping back onto the court is staying healthy. Even a minor injury can destroy a player’s confidence and impact the baller psychologically.

All-Stars in the past have suffered multiple injuries in a short period of time, e.g., Klay Thompson, Anthony Davis, Derrick Rose, and Blake Griffin.

Moreover, the Jazz selected Azubuike 27th overall out of Kansas in the 2020 NBA Draft. During his rookie season, he averaged 1.1 points and 44.4% shooting from the field in 15 games played off the bench.

Udoka Azubuike says he doesn't think he'll play much, if at all, vs. Dallas for Jazz's last preseason game tomorrow.

In six games played with the Salt Lake City Stars during the 2021-22 season, the Kansas product averaged 7.7 points, 11 rebounds, and 1 assist. And he shot 60% from the field while playing 28.8 minutes per game.

Jazz executive Danny Ainge has until Oct. 31st to pick up his $3,923,484 club option for the 2023-24 season. Otherwise, the center will become a restricted free agent in the future.