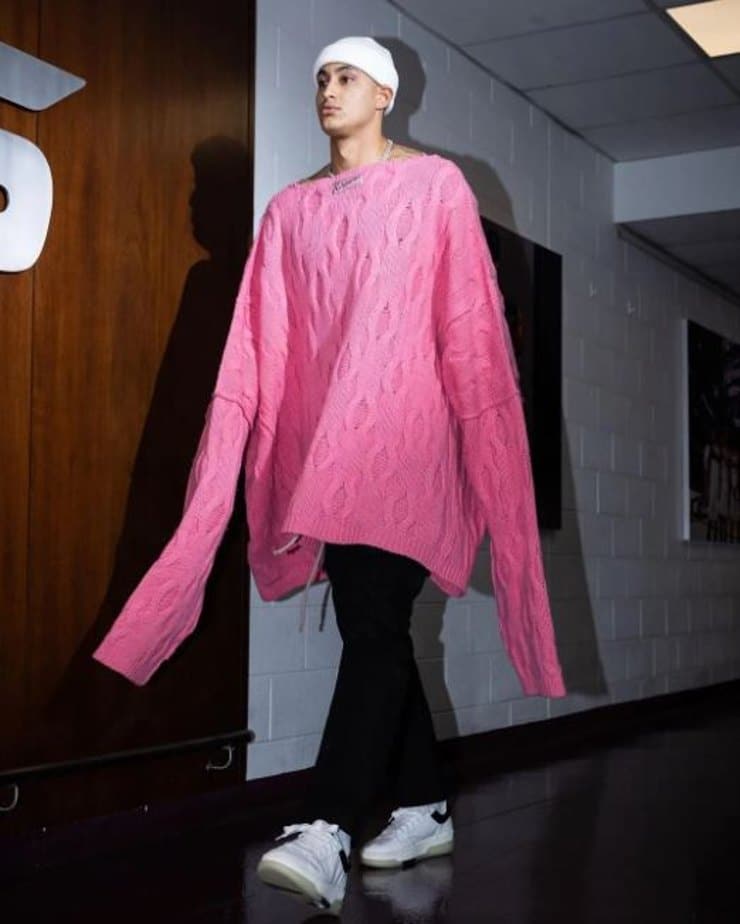 Washington Wizards forward Kyle Kuzma received tons of criticism last year when he posted an image of him wearing an enormous Raf Simons pink sweater on Instagram. However, he loves his wardrobe. The 2020 NBA champion also believes his casual attire belongs in a museum.

When asked about his Internet haters by People, he told one journalist, “I think people look at me and they see blond hair and they see the person that I date or the clothes that I wear, they have this image of me.”

“But not many people know that I’m just a regular humble dude and I just have fun.”

On Christmas Day in 2019, Lakers teammate Quinn Cook even posted a video on Twitter of the entire team mocking Kuzma for his outfit in the locker room. He was wearing a mesh tank top and a mint-green suit.

The Lakers went in on Kuz's fit 😂

Then, on the topic of his bleached blond hair, he mentioned, “It comes off as not serious, but you look at every soccer player in the world, they have crazy hair, but it’s just a stigma around American sports fans view what an athlete should be and what they should look like.”

Additionally, in November 2021, Kuzma received a lot of attention for wearing a pink 7XL Raf Simons sweater. The sleeves went down past his knees. It was a sweater you’d expect to see a WNBA player wear.

After Twitter and Instagram users ridiculed the fifth-year player’s sweater, he responded. “The pink sweater was an art piece,” explains Kuzma. “It was iconic, and the entire world was talking about it.”

According to the Raf Simons website, the oversized-sleeve virgin wool jumper costs $1,659. And the available colors include yellow, black or pink. 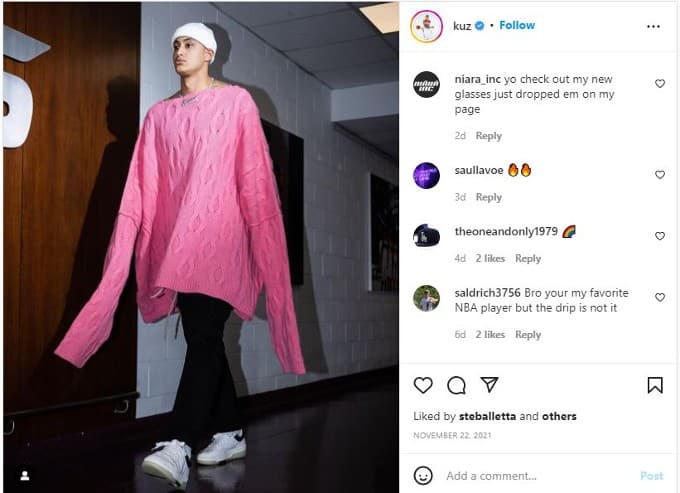 Kuzma continued, “It remains one of my favorite things I’ve ever worn because of the messaging behind it.”

Maybe his choice in clothes has something to do with who he’s dating. Kuzma is currently in a relationship with Winnie Harlow, a 28-year-old Canadian fashion model. She loves the Raf Simons pink sweater.

“We always bounce ideas off each other,” says Kuzma. “[Winnie] has a lot of style, too, and that’s one of the things that’s connecting me to her, and you know we love fashion, we love art, we love clothing.”

Kyle Kuzma is the blow up air dancer at sales pic.twitter.com/o8HNHNXcAY

“For me to wear a big-ass sweater, that’s not a piece you’d wear to the mall or anything. That’s something that’s going to go in my house hung up on the wall.”

Nowadays, the 27th overall pick of the 2017 NBA Draft couldn’t care less what people think. Kuzma’s fashion reflects his personality. It’s part of who he is. The Wizards forward made his point clear at the end of the interview.

“People are always going to have opinions and reference points on how they view life and how they think life should be,” explained Kuzma.

“So it’s all about just being yourself and doing what you want, because all the people that say things about you, they’re not going to be in the grave with you, so it doesn’t really matter too much.”

That’s kind of harsh, but it makes perfect sense. During each postgame press conference, millions of NFL fans made fun of Cam Newton because of his outfits in the past. Athletes have to protect their image whenever they can — even if the majority of fans disagree with their physical appearances.

More news stories concerning Kyle Kuzma and the Wizards are on the main page.