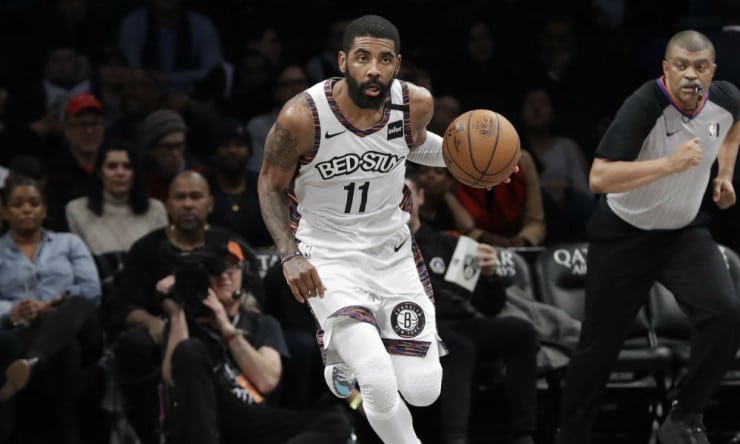 Last month, Kyrie Irving was suspended by the Brooklyn Nets for some controversial posts on his social media accounts regarding some anti-Semetic tropes. He’s been back with the team for a while now, but today, more repercussions of his actions are still taking place. Nike announced last month that they had suspended their relationship with Irving. Now, the two sides have parted ways and Kyrie is officially a sneaker free agent.

Irving had one of the most popular shoe brands on the market, not just for Nike. He finds himself at a crossroads now. The reputation he’s built for himself may not be the type of player another brand is looking to sign. It will be interesting to see how this all plays out in the future for him.

Kyrie Irving is no longer a Nike athlete, Nike spokesperson says. The sides have parted ways one month after Nike suspended its relationship with the Nets star. Irving has one of most popular signatures shoes in the NBA and is now a sneaker free agent.

In an interview last month with CNBC, Nike co-founder Phil Knight made strong comments regarding Kyrie’s posts at the time.

“Kyrie stepped over the line. It’s kind of that simple,”… “So he made some statements that we just can’t abide by, and that’s why we ended the relationship. And yeah, I was fine with that.” – Phil Knight

This was not the first time we’ve seen the relationship get a little bumpy. In 2021, Nike was in preparation to release the “Kyrie 8”, the latest edition of his signature shoe. However, Irving criticized the product, calling the design “trash” and said that he had “nothing to do with the design or marketing” of the shoe. He eventually took back those comments, calling them “unfair”. The “Kyrie 8” was never officially released. It was reported in May of 2021 that Nike were unlikely to sign a contract extension with Kyrie after his contract expired following the 2022-23 season.

Ties have been cut before that date and he’s a free agent on the sneaker market for the first time in over a decade. A 2021 report said that Irving was earning $11 million annually from Nike, which was the seventh most lucrative shoe deal amongst active players. Those ahead of him were Lebron James, Kevin Durant, Steph Curry, James Harden, Zion Williamson, and Giannis Antetkounmpo. No details are out yet on who Kyrie will sign a shoe deal with next.