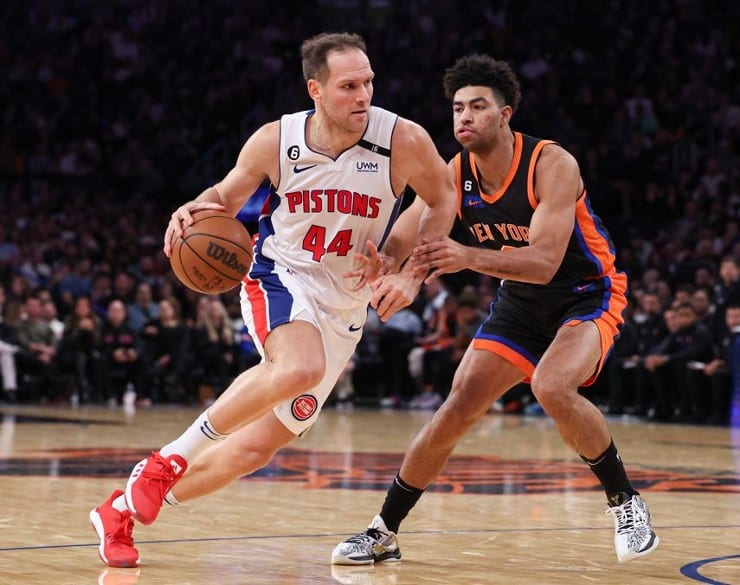 The Los Angeles Lakers are among the teams interested in trading for Detroit Pistons forward Bojan Bogdanovic. Through 14 games this season, the 33-year-old is averaging 20.3 points, 3.4 rebounds, and 1.9 assists.

According to Jake Fischer of Yahoo Sports, the Lakers are intrigued by Bogdanovic’s perimeter play so far this season. He’s shooting 43% from 3-point range. The Phoenix Suns were the other team mentioned.

A few NBA betting sites are giving the Lakers the 19th-best odds to win the championship in 2023. However, after every other loss, some sportsbooks continue to drop their playoff chances.

Full episode of ‘Please Don’t Aggregate This’ with @MikeACurtis2 is up now on @getcallin, Apple and Spotify: https://t.co/yGIsgabJCq

“He’s a player that I think a lot of winning teams — a team looking to get to the second round that’s never gotten there or a team that wants to push their way to really be a title threat — would want,” Fischer said on his “Please Don’t Aggregate This” podcast.

In September, the Utah Jazz traded Bogdanovic to the Pistons for cash, Saben Lee, and Kelly Olynyk. The Pistons are his fifth NBA team. Of course, the Jazz also received a trade exception.

“Phoenix was at the top of everyone’s list in terms of suitors that have capital to pay in addition to talent and the salaries that made sense,” continued Fischer.

However, the Lakers possess only two first-round draft picks: one in 2027 and another in 2029. While Bogdanovic alone might not be worth a first-round pick, maybe Lakers G.M. Rob Pelinka could also attempt to trade for Pistons guard Cory Joseph as well.

If a blockbuster trade for outside shooters leads to another championship, LeBron James and the Lakers should be all for it. On Saturday, NBA rumors surfaced that James was pushing L.A.’s front office to trade for Brooklyn Nets guard Kyrie Irving.

Though, there have not been any new developments on that interesting rumor.

Young teams need veterans that lead by example, make tough plays & stay even keel. @44Bojan didn't get the foul call on this play, but his effort to play through adversity & finish with a game-high 28 points, 6 RBS # 4 AST earned him tonight’s @ally #RelentlessPlayerOfTheGame. pic.twitter.com/TX5WeC24lB

“The Lakers were obviously involved. I got a list of other teams that I think have called and contacted, but nothing too crazy at this point in terms of actual conversations that are still ongoing,” added Fischer.

“I do know Detroit is getting calls on him just like any team [when] we’re getting close to the Dec. 15 area where a lot of players who signed [in free agency last summer] are going to be eligible [to be traded]. That’s kind of the unofficial start of the trade window. But also, he’s playing really well for this team right now.”

With a 3-10 record, the Lakers are expected to make a trade soon. They now appear to be in the desperation stage. LeBron is aiming to avoid missing the playoffs for the fifth time of his 20-year career.