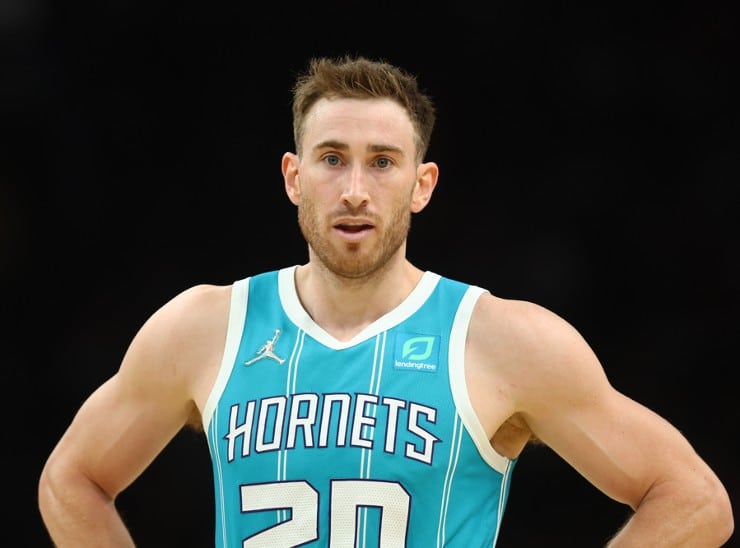 The guard started in 30 of those games. Considering the ninth-year veteran is on the downside of his professional playing career, Harris is definitely overpaid. Shooting-wise, he played phenomenal last season. He shot at least 43% from the field and 38% from 3-point range for the first time since the 2017-18 season.

Although Love was the runner-up for the Sixth Man of the Year Award, the 15-year veteran is still overpaid. He turns 34 in September. On Jul. 24, 2018, Love signed a four-year, $120 million contract. He is entering the final season of this said contract.

Furthermore, Hayward has never played a full season of his entire NBA career. Although he appeared in 80 games of the 2015-16 season with the Jazz, he has struggled to remain on the court each season since then. The forward is just not dependable. When he does play, more often than not, Hayward doesn’t make his presence known on the court. This is why he’s overpaid.

During the 2022 NBA Playoffs, Russell could have played better against the Grizzlies. In Game 6 of that first-round series, the guard finished with 7.0 points, 1.0 rebound and 4.0 assists in 27 minutes played. He scored only 10 points in Game 4 as well. Russell signed a four-year, $117.32 million contract in 2019. Other articles related to “Most Overpaid NBA Players in 2022” are on the main page.

Blake Griffin made $29,764,126 from the Pistons last season and signed a one-year minimum deal with the Nets worth $2,641,691. As always, these amounts do not include incentives. Griffin has yet to sign a new contract with the Nets for the 2022-23 season. In a total of 56 games played with Brooklyn last season, Griffin averaged 6.4 points, 4.1 rebounds and 1.9 assists per game.

He is a serviceable forward off the bench. Nonetheless, the 33-year-old scammed his former team. He is not worth his asking price. After 17 games into the regular season, Nets coach Steve Nash decided to swap Blake Griffin for LaMarcus Aldridge at starting center.

When Simmons had the chance to help his new team against the Celtics in the first round of the 2022 NBA Playoffs, the guard remained out. Much like Kyrie Irving, he doesn’t strike anyone as being a team player. If the front office and fellow teammates have to question a player’s willingness to work hard and succeed at the NBA level, it’s an issue. Team chemistry is important. On Jul. 16, 2019, the guard signed a five-year, $169.65 million contract.

Equally important, Kemba Walker is projected to make $36,596,549 for the 2022-23 season. Similar to other players listed above, Walker has dealt with injuries the last couple of seasons. In January, he was forced to sit out due to a left knee injury. For this logical reason, he’s overpaid.

In the 2021-22 season, he only played 37 games with the Knicks. The guard averaged 11.6 points, 3.0 rebounds and 3.5 assists per game. Ever since getting traded by the Hornets for Terry Rozier in 2021, the four-time All-Star has not been the same player. Last Thursday, the Knicks traded Walker to the Pistons. The Knicks are aiming to sign Jalen Brunson from the Mavericks. Other articles related to “Most Overpaid NBA Players” are on the main page.

Next, Kyrie Irving is projected to make $36,934,550 next season. Statistically, Irving is one of the best players in the league. So, why is he on this list? Well, the guard only appeared in 29 games in the 2021-22 season. Quite a few NBA analysts are under the impression that Irving is not a team player. This is a problem.

He was healthy throughout most of the season, but the guard was not allowed to participate in home games at Barclays Center due to his decision to not get vaccinated against COVID-19. His choice was understandable.

Though, one can’t help but wonder how many more home games the Nets could have won had Irving played. He averaged 27.4 points, 4.4 rebounds and 5.8 assists last season. In the first round of the NBA playoffs against the Celtics, Irving averaged 21.3 points, 5.3 rebounds and 5.3 assists per game. Offensively, this series was not his best performance.

Additionally, Russell Westbrook is set to make $47,0063,478 for the 2022-23 season. In a total of 78 games played last season, he averaged 18.5 points, 7.4 rebounds and 7.1 assists per game. While still a great player, in what way is Westbrook worth this salary? If a team’s general manager is seeking a player who can record a triple-double, this two-time scoring champion will fit the bill.

However, Westbrook averaged just 18.5 points per game in the 2021-22 season. The last time the guard failed to average at least 20 points per game was back in the 2009-10 season. Plus, now Lakers G.M. Rob Pelinka is deciding on whether or not he’s going to trade the nine-time All-Star this offseason. On Sept. 29, 2017, Westbrook signed a five-year, $205 million contract. The 2022-23 season is his player option.

Not to mention, Wall can now be considered an injury-prone player. He missed the entire 2019-20 season after tearing his ACL and dealing with an infection. Leading into the 2022-23 season, there is little evidence to suggest that Wall will play at a high level. Even then, the guard ranked 38th in the league in points in the 2020-21 regular season. Just keep that in mind. Other articles related to “Most Overpaid NBA Players in 2022” are on the main page.