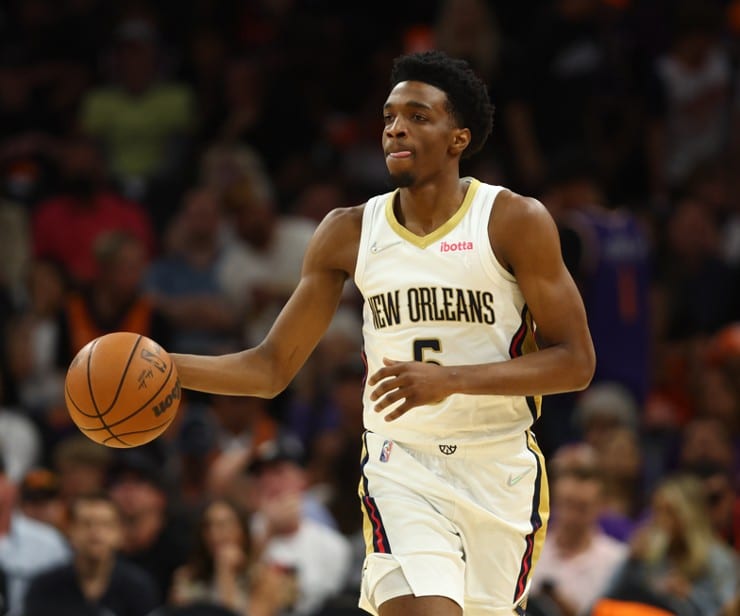 To begin, some fans would say that Tyler Herro is paid fairly. However, his box-score game statistics prove otherwise. In the 2021-22 regular season, Herro led the Heat in scoring, averaging 20.7 points per game in 66 games played. This metric is based on total games played as well. While Jimmy Butler averaged 21.4 points per game, he appeared in only 57 games. Herro is set to earn $5,722,116 for the 2022-23 season.

Furthermore, Immanuel Quickley has a team option worth $2,316,240 for next season. In a total of 78 games played in the 2021-22 season, the guard averaged 11.3 points, 3.2 rebounds and 3.5 assists per game. Both Herb Jones and Immanuel Quickley are on bad teams. So, these two players oftentimes fall under the radar. In the Knicks’ 116-113 loss to the Trail Blazers, the guard scored a career-high 31 points.

On Apr. 3, in the Knicks’ 118-88 win over the Magic, the guard ended his outing with his first career triple-double. Quickley finished with 20 points, 10 rebounds and 10 assists. He was selected 25th overall by the Thunder in the 2020 NBA Draft, but his draft rights were traded to the Knicks.

Next, Desmond Bane will earn $2,130,240 next season. In the 2021-22 season, he averaged a career-high 18.2 points per game in just his second season in the league. Bane was selected 30th overall by the Celtics in the 2020 NBA Draft. Nonetheless, his draft rights were immediately traded to the Grizzlies.

On Dec. 5, 2021, Bane scored a career-high 29 points in his team’s 97-90 win over the Mavericks. As if the information above wasn’t convincing enough, the forward set the Grizzlies’ franchise record for 3-pointers made in a season (228). Bane also dominated from beyond the arc in the postseason. He definitely deserves to get paid.

Moreover, Jalen Brunson is another underpaid guard in this league. He played a crucial role in helping the Mavericks reach the Western Conference Finals. Last season, Brunson earned $1,802,057. In a total of 79 games played in the 2021-22 season, the fifth-year guard averaged 16.3 points, 3.9 rebounds and 4.8 assists per game. In Game 2 of his team’s first-round playoff series against the Jazz, Brunson scored a career-high 41 points.

He is entering this offseason as an unrestricted free agent. The guard can either re-sign with the Mavericks or explore other options. One report suggested that Brunson would sign with the Knicks, considering coach Tom Thibodeau added Rick Brunson, Jalen’s father, to his coaching staff. Other articles related to “Most Underpaid NBA Players in 2022” are on the main page.

Besides Jones and Quickley, another underpaid player on an underachieving team is Mitchell Robinson. As a teammate of Quickley, Robinson averaged 8.5 points, 8.6 rebounds and almost 1.0 assist per game in 72 games played last season. Also, he ranked second in the NBA for block percentage (7.1) and offensive rebounds (295).

On Dec. 28, 2021, in the Pelicans’ 108-104 win over the Cavaliers, Jones finished with a career-high 26 points. Not to mention, he closed out his outing against the Lakers with a career-high six steals in his team’s 116-108 win on Mar. 27. The rookie’s standout performances led to him being named to the NBA All-Rookie Second Team.

Gary Payton II is another underpaid talent. He is set to earn $1,669,178 for the 2022-23 season. In a total of 71 game played last season, Payton II averaged 7.1 points, 3.5 rebounds and nearly 1.0 assist per game with the Warriors. Plus, his field goal percentage was 61.6%. Of course, his points per game average last season was also a career high. Even though he averaged just 17.6 minutes played per game, Payton II still generated career-high numbers.

This all started when the guard signed a 10-day contract with the Warriors on Apr. 8, 2021. Months later, he was waived by the organization in October. Then, he was brought back on a one-year deal. Last season, he ranked 18th in the league in steals, averaging 1.4 per game. In the 2022 NBA Finals, Payton II averaged 7.0 points, 3.2 rebounds and 1.4 assists per game versus the Celtics.

Additionally, Caleb Martin converted his standard contract to a regular contract on Feb. 15. Before his new contract, he earned $527,614 with the Heat last season. Then, it changed to $1,576,305. Is Martin still underpaid? Our experts think so. In a total of 60 games played, Martin averaged a career-high 9.2 points per game with Miami. Keep in mind, he also started in 12 games.

And Martin shot 50.7% from the field. The forward has yet to win an NBA award, but he serves as a key piece for the Heat’s bench. Needless to say, Martin went undrafted in 2019. If he has another career performance next season, it will only add to this argument. Consistency is most important.

For a second-round pick in the 2021 NBA Draft, expectations were lower for Ayo Dosunmu throughout last season. Though, the rookie went on to average 8.8 points, 2.8 rebounds and 3.3 assists per game in 77 games played. The Bulls shooting guard also shot 52% from the field. Considering his salary for the 2022-23 season is not guaranteed money, he is underpaid right now.

On Aug. 12, 2021, Dosunmu signed a two-year, $2.5 million contract with the Bulls. On Jan. 25, in his team’s 110-109 win over the Thunder, the 22-year-old started his performance with nine consecutive made field goals. This broke Orlando Wooldridge’s rookie record of eight straight made field goals. Since the guard was selected to the NBA All-Rookie Second Team, he deserves more money.

While the guard has not yet won any NBA awards, he went undrafted in 2019. In the Lakers’ season finale, Reaves recorded his first career triple-double in his team’s 146-141 overtime win against the Nuggets. He ended his outing with a career-high 31 points, 16 rebounds and 10 assists. More articles related to “Most Underpaid NBA Players in 2022” are on the main page.