New York Knicks rookie Kristaps Porzingis talks about the team’s recent play, what he’s learned in his first month in the NBA, how he’s handling the ups and downs of the season, head coach Derek Fisher’s trust in him and more.

What’s Wrong With the Wizards?

One of the biggest surprises early in the 2015-16 NBA season has been the poor play of the Washington Wizards. Entering the campaign, Washington was expected to be one of the top teams in the Eastern Conference and a legitimate threat to the star-studded Cleveland Cavaliers. The Wizards have the talent and nearly advanced to the Eastern Conference Finals last year before John Wall sustained five non-displaced fractures in his left hand and wrist. Even with Wall banged up, the Wizards put up an impressive fight against the Atlanta Hawks, but ultimately lost the Conference Semifinals series in six games. 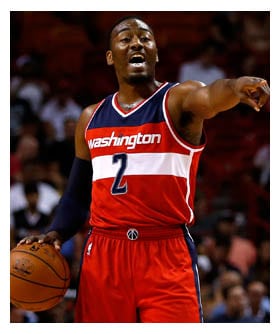 Instead of picking up where they left off, Washington has gotten off to a very slow start this season and is struggling on on offense and defense. Last year, the Wizards had the NBA’s fifth-ranked defense and 19th-ranked offense. This season, they’ve regressed significantly on both ends of the court, ranking 18th in defense (allowing 102 points per 100 possessions) and 25th in offense (scoring 97.9 points per 100 possessions).

The team seems to be lacking an identity, as they’re no longer a top defensive unit and the offense isn’t producing. Entering this season, head coach Randy Wittman tried to instill a new offense that would increase the team’s pace and emphasize spacing. However, the changes haven’t resulted in wins and the numbers show that Washington now has one of the league’s worst offenses. The team is struggling to score the ball and this, coupled with their surprisingly poor defense, has led to plenty of losses.

The Wizards are now 7-9 on the season, which puts them in 12th place in the Eastern Conference. They have dropped five of their last six games, including an embarrassing loss to the woeful Los Angeles Lakers on Wednesday night.

Washington clearly isn’t living up to expectations, as this was supposed to be the season that they emerged as one of the East’s elite teams. Rather than looking like a legitimate contender, they currently find themselves outside of the East’s playoff picture, sitting below teams like the New York Knicks, Detroit Pistons, Charlotte Hornets and Orlando Magic – all of whom missed the postseason last year.

Two months ago, I asked Wall what the Wizards needed to do this season in order for this campaign to be considered a success. His response indicated that it was time for Washington to contend for a title.

“A good year is 50-plus wins, getting home-court advantage in the playoffs and definitely making the Eastern Conference Finals to give ourselves a shot at the Finals,” Wall told Basketball Insiders in October. “Anything goes from there – it’s just a matter of whoever can win four games first.”

During that same interview, Wall said that the Wizards’ “main focus is still on being a defensive-minded team and rebounding the ball because that’s what we pride ourselves on; that’s our team’s identity.” Given that Washington is ranked 18th in the NBA in defense and 26th in the NBA in rebounding (averaging 42 boards per game), it’s clear that this season hasn’t gone as Wall and company planned.

Now, it’s obviously still early. No team should be written off after one month of play, especially one as talented as Washington. Remember, they’ve only played 16 games. The NBA season is a grind and teams often turn things around and climb up the standings. With that said, it’s clear that Washington needs to make some big changes and start playing to their full potential if they want to meet their lofty goals.

One change that Wittman recently made was simplifying the team’s defense. After the Wizards were blown out three games in a row by the Boston Celtics, Atlanta Hawks and Oklahoma City Thunder in mid-November, Wittman made the defensive adjustment. Washington responded by winning three straight games. While it obviously hasn’t solved all of the team’s problems, the players seem to prefer the simplified defense.

“I think just because we changed our defense, it simplified everything for everybody. We don’t have to worry about if we are going to ice, black, switch. We just simplified everything and if you miss the call, you know whether it was either the big’s fault or the guard’s fault. I think it’s easier for our team and gets us back to defending the right way.”

Washington still has a lot of problems that need to be solved. Wittman isn’t satisfied with how his team has played at the start of games, calling his team’s early play “lackadaisical.”

“It doesn’t matter who you are playing in this league, if you get down 20 [points], it is very seldom that you come back and win,” Wittman said. “The percentage of that happening is not very high.”

Starting strong and playing with a sense of urgency in the first quarter is important for the Wizards going forward.

“I just think – I don’t know – maybe he’s thinking too much; he’s got to pull the trigger, be more aggressive,” Wittman said of Beal. “I think there are opportunities there. I tell the guys, a lot of our turnovers [come when] we turn down opportunities to shoot. We’ve worked it around and then turn [a shot] down and force a drive or something and turn the ball over. You know, I’ve been in the league 32, 33, 34 years – it’s been so long, I don’t know. But usually, you’ve got to tell a guy to stop shooting rather than shoot [more]. He’s got to just not think. He’s thinking probably a little too much right now.”

Wall and Beal have shown that they can be one of the toughest backcourts to match up against when they’re being aggressive and playing well on both ends. The Wizards will only go as far as their star guards take them, so both players need to carry the team.

Wittman thinks that Washington’s offensive numbers will improve once the team starts shooting the ball better. He believes the team is in a slump that will eventually com to an end, and he’s encouraging his players to just keep shooting with confidence. He’s repeatedly telling his team not to turn down shots, and he feels it’s only a matter of time until the squad’s shots start falling. On the season, the Wizards are shooting 43.2 percent from the field (21st in the NBA) and 34.2 percent from three (17th in the NBA).

After Wednesday’s loss to the Lakers, who entered the game 2-15 and on a seven-game losing streak, the Wizards’ players were understandably frustrated.

“There is no way that we should be down 18, 20 points to a team that has 15 losses,” Garrett Temple said after the loss.

“We have to be more focused,” Marcin Gortat added. “We have to continue to play hard and learn from our mistakes. We need 48 minutes of effort.”

It’ll be tough to right the ship with so many contests against playoff teams coming up. But Washington is a very talented team, so it’s possible they can fix some of their issues and get back to playing at a high level. We’ve seen that this team can compete with just about any team in the NBA when they’re playing to their full potential, they just need to get out of this rut.

However, they need to turn things around relatively quickly because they don’t want to dig themselves a hole that they can’t climb out of, especially in the much improved Eastern Conference. There are currently 10 teams with a winning record in the East, so the conference isn’t nearly as wide open as it had been in recent years.

It remains to be seen if the Wizards can right the ship (or if Wittman will keep his job if the group continues to struggle), but this is certainly a team to keep an eye on as they try to salvage their season.