Can’t Get To Zero

With the NBA Finals now set and other NBA teams turning their attention to the draft and offseason moves, there is a concept worth bringing up, especially as it pertains to free agent dreams and offseason wishes.

Why is this important? In July, the NBA is going to see an unprecedented amount of cap space. The rough math today estimates that there may be as much as $1.09 billion available under the salary cap, meaning NBA teams will enter the market with more than  a billion dollars to spend on what amounts to 270 free agents.

Cap space will be plentiful, but accounting for it won’t be as easy as subtracting what a team has on the books in guaranteed money from the final salary cap figure, which gets locked in July after both the NBA and the Players Union finalize their end of season audits.

One thing that is never possible is for a NBA team to get to zero dollars owed. As a cost control mechanism, every team has to account for at least 12 roster spots either in salaries owed, cap holds for free agents or draft picks or what’s called an incomplete roster charge that is equal to the NBA minimum salary.

The salary cap in and of itself is a cost control mechanism. A team is always going to have at least 12 players, so it must always account for them.

Equally as soon as a team is awarded a first-round draft pick, they must account for that salary too, as well as any legacy draft rights and offer sheets they must issue to retain them.

In many cases teams are still carrying free agent cap holds of players long gone from the roster or even the NBA. Like all things related to the cap, everything can be an asset or a liability, depending on how its recorded.

Two teams are entering this offseason with some tough cap choices to make, specifically because they found diamond in the rough free agents that do not have Bird Rights, which would allow the home team to exceed the cap to keep them.

In essence both the HEAT and the Raptors have to fit would-be free agents under the cap, or risk losing them. 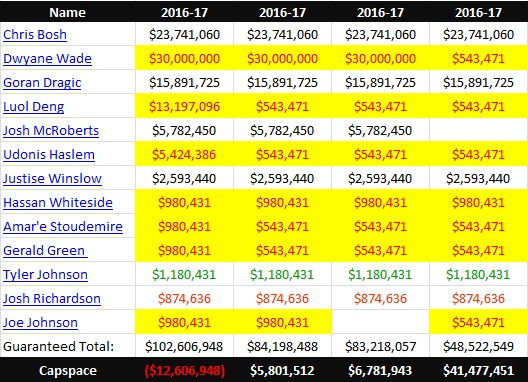 Miami has two big problems with their cap situation. The first is that Dwyane Wade has a cap hold of $30 million. The HEAT have to resolve that first in order to create salary cap room for free agent Hassan Whiteside.

They also likely have to part ways with Luol Deng, Gerald Green and Amar’e Stoudemire. The good news is the HEAT can hang on to Tyler Johnson’s rights with a nominal qualifying offer and word is Udonis Haslem is willing to come back at the NBA minimum to finish his career in Miami.

In a best-case scenario, the HEAT can get to about $41.4 million in cap space if they can off-load the contract of Josh McRoberts. That would give them enough room to re-sign Wade and Whiteside, but do little else. Every dollar the HEAT gives to Wade is one less dollar they have in cap space, so balancing what Wade will need with what it will take to re-sign Whiteside is going to be a small challenge – even more so if the HEAT want to add to the roster in a meaningful way.

The HEAT will continue to hope that Chris Bosh can overcome his health situation. The only way he affects their books is if he is ruled medically unable to continue his career, and even if that occurs, the HEAT won’t see any cap savings for one year from his last game played (which was in early February). 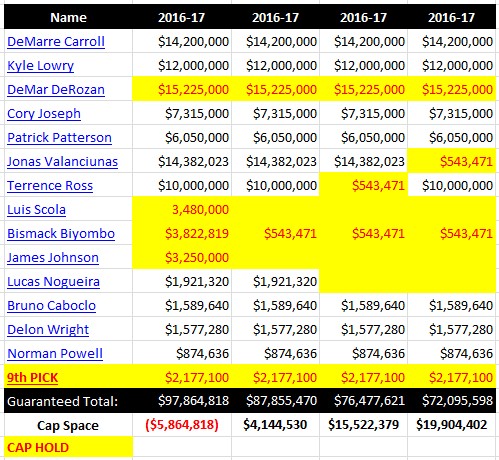 The Toronto Raptors face a similar cap problem with soon-to-be free agent Bismack Biyombo. The Raptors scooped him up on the cheap last year and he has outplayed his option year and is all but guaranteed to be an unrestricted free agent.

Biyombo recently told reporters in Toronto that he would really like to be back with the Raptors next year and felt like they could work out the economics, hinting that he’d give the Raptors a bit of a discount on a new deal.

Like the HEAT, the Raptors likely open the free agent period with no cap space because of cap holds on their free agents. If the Raptors renounce the holds on Luis Scola and James Johnson and Biyombo opts out, the Raptors could get to $4.14 million in space. That’s not going to be enough room to re-sign Biyombo, who could get free agent offers north of $12 to $15 million per season, according to league insiders.

The Raptors do have the luxury of a lower-than-market cap hold on DeMar DeRozan. His hold will count for $15.22 million, despite his maximum salary being well above that, affording the Raptors the chance to create space and sign free agents and do DeRozan’s deal last and exceed the cap using his Bird rights.

In order for the Raptors to get to the kind of cap dollars it’s going to take to keep Biyombo, they are going to have to offload one of their heftier contracts in trade.

If the Raptors trade, say, Terrence Ross and return almost nothing for his salary, they can free up $10 million more. Historically moving cap money is expensive and usually costs a team a future draft pick or a promising young player. The Raptors will carry a $2.17 million hold on the ninth pick. They could trade down and reduce the cap impact of that pick, or they could use that pick to move a salary. They could also move one of their younger guys like a Lucas Nogueira, who is eager to have a role.

If the Raptors move off Ross and Nogueira, as well as renounce holds on Scola and Johnson, the Raptors could get to $15.22 million in usable space, while maintaining the right to exceed the cap on DeRozan. They would also gain the $2.9 million “room” cap exception.

If the Raptors opted to trade center Jonas Valanciunas and Nogueira, with Nogueira being used as the sweetener to move the salary, the Raptors could get to roughly $19.904 million in space, which should be more than enough to re-sign Biyombo and have a little change to add potentially one or two more lower-level players, keep the right to exceed the cap on DeRozan and keep the $2.9 million “room” cap exception.

All of this is of course predicated on the Raptors finding a team willing to take on their cap dollars without sending anything in return and not fleecing the team of other assets, like rookie Delon Wright or the ninth overall pick.

Cap management and accounting is never an easy task, especially for teams with so much money tied up in guaranteed contracts. Managing the cap holds and the incomplete roster charges can make understanding who has cap space a little challenging; imagine what it’s like for the teams actually having to decide which assets to give up on simply to create space.

»In Related: Who still has cap space? How about cap exceptions? Check out the 2016-2017 NBA Salaries tool. The most accurate salary data anywhere.