Around this time last year, Hassan Whiteside had just joined the Miami HEAT. After an impressive stint with the Iowa Energy of the NBA D-League – during which he averaged 22 points, 15.7 rebounds and 5.3 blocks in 28.7 minutes while shooting 85.7 percent from the field – Miami decided to give him a shot and sign him to a partially guaranteed contract. The HEAT had a number of injuries, so they brought in project players like Whiteside, Henry Walker, Tyler Johnson and Michael Beasley.

Adding Whiteside (and Johnson, to a lesser extent) turned out to be an amazing gamble for the HEAT, as he has become one of the best young centers in the NBA.

Early in his NBA career, Whiteside played just 19 games with the Sacramento Kings before he found himself out of the NBA after two years. This led to several seasons bouncing around Lebanon, China and the D-League. Once Miami offered him the chance to return to the NBA, Whiteside was eager to make the most of his opportunity, show he had matured while overseas and stick in the league. Nobody was sure what to expect from him since he had averaged just 1.6 points, 2.2 rebounds and .8 blocks the last time he was in the NBA with the Kings. 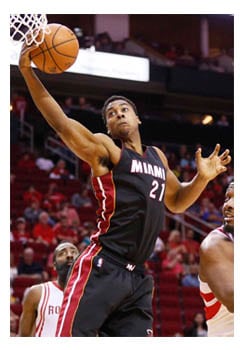 Whiteside responded by playing out of his mind and exceeding all expectations, averaging a remarkable 11.8 points, 10 rebounds and 2.6 blocks last season with the HEAT.

As if those numbers weren’t impressive enough, the 26-year-old center has been even better this season. Through 16 games, Whiteside is averaging 13.5 points, 11.2 rebounds and 4.7 blocks in just 29.2 minutes. That means per 100 possessions, his averages are a ridiculous 23.7 points, 19.7 rebounds and 8.2 blocks. Suddenly, Whiteside has emerged as a serious candidate for the Defensive Player of the Year award and the Most Improved Player award.

Take a deeper look and the stats are even more extraordinary. Even though he’s playing under 30 minutes a night, nobody is close to matching his shot-blocking numbers. He leads the league in blocks per game (4.7) and total blocks (75); the runner-up in both categories is DeAndre Jordan, who averages just 2.7 blocks per game and has only 49 total rejections. Whiteside has been so dominant that he averages more blocks per game individually than 14 NBA teams average collectively.

Advanced analytics also display Whiteside’s brilliance on the court. He leads the NBA in defensive rating (87.7), significantly ahead of runner-up Tim Duncan (91). He also ranks first in block percentage (12.3 percent), which is the percentage of attempts a player blocks while he’s on the court; no other player is above 6.7 percent this year. In addition to his defensive numbers, Whiteside ranks 10th in the NBA in player efficiency rating (25.9), ahead of stars like Anthony Davis, James Harden, Chris Paul and Andre Drummond among others. Considering PER doesn’t do a great job of taking into account a player’s defensive contributions, Whiteside’s rating is even more amazing.

And Whiteside isn’t just posting empty stats either. His contributions have directly impacted Miami, helping the team climb up the standings and emerge as one of the league’s best defenses. The HEAT are currently 10-6, which is good for fourth place in the Eastern Conference, and their defense ranks first in the NBA in opponent field goal percentage (40.8 percent) and second in points allowed per 100 possessions (95.5). Their intimidating interior presence is a big reason for that. In addition to blocking an incredible amount of shots, Whiteside also alters plenty of other attempts and opposing teams often settle for jumpers rather than challenging him at the rim.

Whiteside has consistently produced this year, blocking four or more shots in 11 of his 16 games. However, several jaw-dropping performances stand out above the rest. Against the Minnesota Timberwolves, he had a 22-point, 14-rebound, 10-block triple-double while shooting 71.4 percent from the field. Against the Philadelphia 76ers two games later, he filled the stat sheet again with 13 points, nine rebounds, eight blocks and one steal. Against the Atlanta Hawks, he contributed 23 points, 14 rebounds and four blocks while shooting 11-12 from the field (91.7 percent).

Last season was Whiteside’s coming out party. He surprised everyone with his successful return to the league, proved his early success wasn’t a fluke and got his NBA 2K rating up (which was a goal of his, as he hilariously stated during a national television interview). This season is different. Whiteside isn’t sneaking up on anyone. Teams know exactly what he can do and yet they still can’t stop him. While he’s still an underdog with a fun story, he’s also much more than that. This season, Whiteside is becoming a household name and entering the “best center in the NBA” discussion.

While Dwyane Wade and Chris Bosh are still Miami’s biggest stars, Whiteside has arguably become the team’s third-most important player (which would’ve seemed crazy around this time last year when he was fresh out of the D-League). However, the numbers show the monumental impact he has on games. It’s also worth noting that he has the highest PER among all HEAT players and his usage rating (20.8) is third on the team behind only Wade and Bosh. Without Whiteside, there’s no question that Miami would be a much different team.

But even though Whiteside produces like a marquee player for Miami, he isn’t paid like one. The big man is making just $981,348 this season since the HEAT inked him to a bargain two-year deal out of the D-League. That’s arguably the best contract in the NBA at the moment. While Whiteside can’t complain because Miami gave him a shot when no other team was willing to do so and he’s certainly making more than he was with the Energy, there’s no question he has outplayed his deal.

Fortunately for Whiteside, he’s set to hit unrestricted free agency this summer. After playing so well since joining the HEAT, Whiteside seems like a lock to sign a maximum contract in July. Big men get big pay days, especially ones who post numbers like Whiteside. Not to mention, the salary cap is about to skyrocket this offseason due to the NBA’s new television deal, which means Whiteside is hitting free agency at the perfect time. A lot of teams will have a crazy amount of money to spend, so Whiteside is poised to get an enormous raise.

Many teams will be bidding for his services – offering a huge contract, an increased role, more marketing, etc. (Sound familiar, DeAndre Jordan?) Whiteside will be able to take his pick of attractive suitors. He will likely weigh all of his options next summer, as most free agents do when they hit the open market and are being courted. It’s just smart business to see what other franchises have to offer and whether the grass is greener elsewhere.

With that said, he may stay in Miami. After all, they were the team that gave him this golden opportunity and there’s no question the HEAT are talented and positioned to contend in the East. But further complicating things for Miami is that they don’t have Whiteside’s Bird rights since he only spent two years with the team, meaning they can’t offer him a longer contract than other suitors and can’t go above the salary cap to retain Whiteside. Instead, Miami will be in the same position as every other team pursuing the center, using salary cap space to sign him and offering essentially the same contract as everyone else. The HEAT do have Whiteside’s Early Bird rights, but that’s irrelevant since he’ll command significantly more than the league average when he hits the market.

Whiteside’s free agency will be extremely interesting to watch this summer, as one of the league’s best up-and-coming centers will be available and it’s unclear what he plans to do.

In the meantime, expect the big man to keep posting monster numbers and helping Miami contend in the Eastern Conference. It’s been an amazing year for Whiteside and he has come a long way in that short amount of time. And you can expect even more growth moving forward. Around this time next year, Whiteside will be a very rich man and he’ll likely be entering the prime of his career. That’s a scary thought for teams around the league, who already don’t have an answer for him.