One of the biggest surprises of the 2014-15 NBA season was the emergence of Utah Jazz center Rudy Gobert. The big man was the 27th overall pick (and the ninth center selected) in the 2013 NBA Draft, and he averaged just 2.3 points, 3.4 rebounds and .9 blocks in 9.6 minutes as a rookie. But once Gobert received more playing time in his second season, he became one of the most productive centers in the league. In his 37 games as a starter last year, he averaged 10.8 points, 12.5 rebounds, 2.8 blocks and one steal while shooting 59.4 percent from the field.

His advanced stats are even more impressive and show just how much of an impact he had on the defensive end. Gobert held his opposition to 40.6 percent shooting at the rim and 55.5 percent shooting from the field – both of which ranked first in the NBA. He also led the league in block percentage (swatting seven percent of all attempts when he was on the court), adjusted points saved per game (nine) and points saved over his position’s average (and it wasn’t close, as he saved 256.2 points last year while no other player saved more than 189). Another number that displayed Gobert’s dominance was Utah’s defensive rating when the big man was on the court (98.8, which would rank second in the league) versus when he was off the floor (106, which would rank 27th in the league). 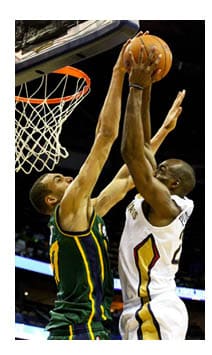 Now, entering his third NBA season and his first as a full-time starter, the 23-year-old is looking to take the next step in his development and prove that he’s one of the NBA’s elite centers.

“That’s my goal, to be one of the best at my position this year,” Gobert told Basketball Insiders. “Then, in a few years, I hope to be one of the best players overall. That’s what I’m working hard for every day. I’m trying to do whatever I can to make my team better because I really think winning is the most important thing.”

If the numbers from last year are any indication, Gobert seems poised for stardom and few players can match his upside. After a productive summer in which Gobert added muscle, worked on his offensive arsenal and played for France’s national team, he should be even better this year.

“I worked a lot on my body, first of all, getting my lower body stronger and trying to get quicker,” Gobert said. “Right now, I’m at 250 lbs. but I’m still around five percent body fat. I feel like I got way stronger. I didn’t gain crazy weight, but I did get a lot stronger and that’s the most important thing. I’ll keep gaining weight slowly but surely. I try to get a lot of calories. Sometimes it’s not easy, but I’m making sure that I don’t miss any meals and I’m always eating well and drinking protein shakes. This summer, I also kept working on my post moves and my jump shot. I played with the national team and just kept working on my game and my basketball IQ.”

Despite being so young, Gobert is already one of the best defensive centers in the NBA and he’s a match-up nightmare due to his 7’2 frame, 7’8.5 wingspan and 9’7 standing reach. Last year, once he started playing well, Gobert noticed that opposing teams would attack him less frequently in the paint. Suddenly, his presence was enough to keep some players away from the rim.

“I liked it before when they’d come in the paint and get blocked; now, they don’t come anymore,” Gobert said with a laugh. “I’m just trying to continue to get smarter and better as a defender. I’m seeing how different teams try to attack me and that’s helped my game.”

Gobert is expected be in the running for this season’s Defensive Player of the Year award. When asked if that is one of his goals for the upcoming campaign, he says he’d love to take home the trophy but is primarily focused on helping Utah break their three-year playoff drought.

“Of course it would be great to win Defensive Player of the Year, but my main goal is really making the playoffs,” Gobert said. “I think a great defensive player is supposed to make their team better. To win an award like Defensive Player of the Year, you need to make your teammates better defensively because basketball is a team sport. That’s what I’m trying to do this year, making sure we have the top defense in the league and are in the fight for the playoffs.

“I always try to make sure all of my teammates are defending and giving 100 percent. If you have four players who are playing their ass off on defense and one who doesn’t do it, it’s going to be shit. I think that’s the way our whole team thinks now. We don’t let guys get lazy on defense. We don’t let a guy just say, ‘I don’t care about defense; I’ll only play on offense.’ When someone makes a mistake on defense, everyone is [held accountable] and tries to fix it. Our five players are always on the same page. That’s what has to happen to be a great defensive team.”

Gobert’s biggest contributions will come on defense, but he’s hoping to be more well-rounded this season. He wants to make more of an impact on offense and says that head coach Quin Snyder wants him to attack more on that end of the court as well.

Gobert raves about Snyder and credits the second-year head coach with improving the team’s defense and culture.

“I think he did a great job in his first year,” Gobert said of Snyder. “He really changed the philosophy. Ever since he got here, we’ve all been on the same page. I think we both see the game the same way and we both really want to win. I think he did a great job because sometimes it’s hard in this league to make players take pride in defense and care about defense. Some guys just want to get buckets and then get the money, and some guys may not really care if they win or lose. I think he brought this winning mentality and did a great job of getting everyone to defend and communicate.

“Coach trusts me and I trust him. My teammates trust me and I trust them. It’s great. I think we started something big last year and now we’re building on it this season.”

Gobert’s chemistry with his teammates should only continue to improve as he plays more minutes in the starting lineup and gains experience.

“[Our chemistry] is a lot better and it’s a good feeling to know that your teammates believe in you and that everyone trusts each other,” Gobert said. “We do have some new guys and some guys who were out, like Alec [Burks], so I’m trying to do my best to get on the same page as them offensively and defensively. But overall, it’s great. We saw at the end of last year what it takes to be a good team and we know what we need to do.”