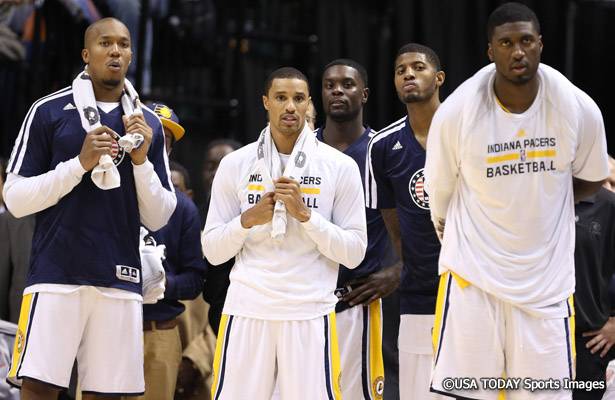 Free agent center Andrew Bynum and his agent are in Indianapolis.

Bynum has been a free agent since being released by the Chicago Bulls on Jan. 7 after a trade from the Cleveland Cavaliers. According to earlier reports, the Indiana Pacers were one of several teams to reach out to Bynum.

Bynum’s agent David Lee told The Indianapolis Star that he and Bynum were in town. According to Lee,

Bynum and the Pacers have not reached a contractual agreement.

“(Bynum) has not signed as yet,” Lee said on Friday night.

Via Candace Buckner of the Indianapolis Star

This answers our question from earlier this week over whether we were going to see Bynum again this season, but with the Pacers we could see him the less than we would have with any of the other teams that were considering signing him.

With an All-Star at the center position already in Roy Hibbert, the Pacers are bringing in Bynum solely for depth and insurance purposes, perhaps wanting to keep him away from other contenders like the Miami HEAT and Los Angeles Clippers just as much if not more than they actually wanted him on their team.

The center position was already a strength for the Pacers that few teams could match. Bynum would have helped those other contenders improve their depth at center and combat Hibbert, but they’ve apparently let the Pacers beat them out for his services without much resistance. Time will tell if they end up regretting it. Bynum has a well-documented list of red flags, but if the Pacers are willing to pick him up, other contenders should have been too.

»In Related: Does Bynum Make the Pacers the Favorites?

Taj Gibson on the Block?

Hinrich and Mike Dunleavy have been churning in the rumor mill for more than a month. Now Taj -Gibson’s name is picking up steam. What the Bulls do with him could determine how serious they are in clearing salary-cap space for a max contract to land a player such as Carmelo Anthony or LeBron James.

According to a source, the Lakers, Wizards and Bobcats have inquired about Gibson, but they were preliminary talks in which the Bulls didn’t like the return.

Moving Gibson would signify the Bulls’ determination to give ¬Derrick Rose a second superstar to play with.

Via Joe Cowley of the Chicago Sun-Times

The problem with showing your hand on your plan in the NBA is that opposing teams are rarely going to comply with it unless it really benefits them, like the Luol Deng trade did the Cleveland Cavaliers. Of course preliminary offers for Gibson are going to be unsatisfactory as Cowley reports, because teams don’t have a reason to make their best offer when they know that the Bulls have great motivation to do a deal.

Gibson’s under contract through 2017, with a very modest contract that will pay him $8 million in 2014-14, $8.5 million in 2015-16 and $8.9 million in the final year. He’s one of the league’s most solid back up power forwards, but unfortunately he’s a necessary casualty if the Bulls are going to be able to offer a max contract to a big name free agent (Carmelo Anthony) this offseason.

Just amnestying Carlos Boozer’s $16.8 million puts the Bulls’ guaranteed salary total at $48.1 million, well shy of a max contract even if the league’s salary cap increases slightly from the $58.6 mark that it was at last season. They can drop almost an additional $2 million by renouncing their rights to Tornike Shengelia and waiving Erik Murphy’s non-guaranteed contract, but would still need to shed Gibson’s contract to ensure they can offer the full max.

With highly-regarded big man Nikola Mirotic set to come over and join them sometime in the next two years, the Bulls could look to him as their eventual starting four man in the case that they do move Gibson. However, the timetable on a Gibson trade could extend beyond the trade deadline. Technically, they can hold onto him until they know they have an agreement with an elite free agent, as long as they have a deal in place with a team willing to absorb his contract without giving any guaranteed salary in return. We saw this happen this offseason in the case of the Golden State Warriors and Andre Iguodala. The Warriors negotiated with Iguodala prior to having the necessary room to sign him, but they pulled off a series of movies that gave them the necessary space to complete the sign-and-trade once they knew they had an agreement with him.

Nuggets guard Nate Robinson will miss the remainder of the year after undergoing surgery to repair a torn ACL. Ty Lawson (shoulder) is also dealing with a minor injury.

At 22-23 the Denver Nuggets are still alive in the playoff race and only three and a half games out of eighth place. They’ve been playing without Andre Miller in the new year due to a conflict between the veteran point guard and first year head coach Brian Shaw, but they may not have a choice but to let bygones be bygones with the injuries the team has suffered at the point guard position. After all, Miller wants to play and the Nuggets need a point guard, so what is there to really fight about right now? Any issues that Shaw and Miller have are not bigger than saving this season, so don’t be surprised if they find a way to form a working relationship in hopes of making a playoff appearance.